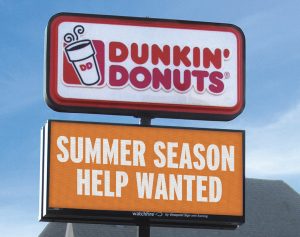 These are the vacation spots that symbolize an idyllic summer: Cape Cod to Mackinac Island; Ogunquit, Maine to Hilton Head. They’re as American as apple pie. But increasingly, these hot spots have relied on foreign workers to do jobs that would otherwise go unfilled. With an unemployment rate hovering around 4 percent and a scarce year-round population in many tourist areas like these, businesses – especially those in the hospitality and restaurant industries – have traditionally turned to seasonal guest workers from countries like Ukraine, Belarus, China and Bulgaria. Last summer, changes to the visa program caused chaos and a severe shortage of short-term workers. Some restaurants and hotels had to open late or close early in the season or cut-back or reduce services, with others scrambling to find staff. And this summer there’s a feeling of deja vu for many business owners – combined with the hopes that somehow they’ll find enough employees.

On the eastern seaboard, Dunkin’ Donuts franchisee Greg Nigro has 17 stores, stretching from Richmond, Virginia, to the Carolina coast. He has five shops in the Outer Banks, where the population swells from 35,000 residents to more than 350,000 between mid-May and early September.

One of Nigro’s Dunkin’ shops, off the beach in Elizabeth City, is large enough so that there’s usually no labor shortage year round, but for most of his Outer Banks stores, Nigro says, “Even if every person – child through elderly – worked, it would not be enough to support the tourists.”

Nigro hires international students on a J-1 visa to fill the workforce gap. The program allows students to work and travel in the U.S. during the summer. These student workers have become a summer staple at not just Dunkin’ Donuts, but elsewhere—stocking grocery shelves, cleaning hotel rooms, selling clothing at outlets, selling french fries and ice cream. Nigro works with sponsoring agencies to provide housing and transportation and help workers navigate cultural differences.

“The cultural benefits of this program can’t be overemphasized…We do five times the sales in the summer versus the winter, which is a tremendous fluctuation. I count on these people coming over to make my business work.”
— Greg Nigro

“The cultural benefits of this program can’t be overemphasized,” says Nigro, who has seen lifelong friendships develop and an increased global awareness. According to the U.S. State Department, about 300,000 foreign visitors from 200 countries, mostly under age 30, come to this country for temporary work every year. Nigro is in the camp that these workers are not taking jobs away from Americans, but are instead filling vacancies that locals can’t.

“We do five times the sales in the summer versus the winter, which is a tremendous fluctuation. I count on these people coming over to make my business work,” says Nigro, who relies on 50 to 60 overseas helpers, from mostly Eastern Europe and Asia. He rotates them in and out to fill out his work force. He also saves on payroll taxes, since J-1 visitors do not pay Social Security, Medicare or federal unemployment taxes, so employers don’t have to match these costs.

But an executive order issued last year by President Donald Trump, “Buy American, Hire American,” has raised concerns that the U.S. will limit the number of visas it issues and restrict J-1 students to work only two out of four seasons – spring and summer, for example, which would make it very difficult for business owners like Nigro to staff the shoulder seasons. Since much lead-time is needed to process these short-term visas, Nigro started early this spring to identify applicants and find them housing. Another location he owns, in Williamsburg, also has seasonal staff shortages in the summer when tourists from colonial Williamsburg and Busch Gardens stream in; he supplements regular staff there with a handful of J-1 students during the summer months.

But not everyone thinks that guest workers are a good solution to a tight labor market. Todd LaLumiere, a Dunkin’s franchisee in Annapolis, MD, first used temporary foreign workers over a decade ago when he was opening up his first five DD shops and didn’t have enough people to run his business.

“It was like going to the people store,” says LaLumiere, who sponsored students in the J-1 trainee and intern program, which allows college students and others to receive 18 months of work and training experience in the United States. While he ended up having two general managers as a result of the J-1 management program, he found that over time, it was much harder than it was worth.

“It wasn’t a good solution for me,” LaLumiere says. “Kids come and go so fast, and you need to teach them what a bagel is; what a dollar is; how to make change – then they’re only here for two to three months and you have to go through the whole thing over again.”

He says he found J-1 students not unlike local students he hired: “A perfect bell curve of humanity [where] two kids are great; two kids awful, and all the rest in the middle, no matter where they came from.”

LaLumiere admits student visas might make sense in rural areas or for seasonal businesses, but he found that ramping up his recruitment and offering better benefits was a better way of attracting reliable help.

“Everyone feels the labor shortage,” says LaLumiere. “We’ve been working really hard to make our business attractive to workers and hang onto them. It’s improving the culture of your business and not relying on a revolving door of workers.”

In the meantime, Nigro deals with labor shortfalls the same way many employers are responding in an ever-tightening labor market: if you can’t find enough employees, give the ones you have more work. He has district managers and supervisors fill in; other staffers work overtime. Sometimes he can contact overseas agencies and recruiters and request some additional J-1 students or find a guest worker who was scheduled to work in another state and move them to his business instead.

“It creates some anxiety and a lot of work on the back end to try to figure out how to fill slots and positions,” says Nigro. One of his Outer Banks shops in secluded Corolla even closes down for five months, because there’s only 390 people in the winter – 100,000 in the summer – and it’s not economically viable to keep the store open. If the worker shortage became severe enough in other parts of the barrier island, he’d consider that same option but he’d like to avoid that at all costs.

So the weather is finally warmer, which Nigro loves, but the summer labor forecast remains cloudy. Nigro hopes the political climate will change and become more favorable toward foreign-visa workers. After all, there are people lining up to buy coffee and donuts.