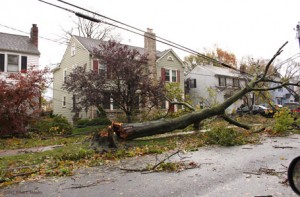 Toppled trees from Sandy knocked out power to communities throughout New Jersey.

Laura Donavan of New York City was disappointed when the Starbucks stores in her neighborhood closed due to Hurricane Sandy, which hit the New York area late Oct. 29. Needing her morning cup of coffee, she called her local Dunkin’ Donuts and found them open.

“I immediately threw a hoodie over my flannel pajama top, changed my clothes, and dashed out the door,” Donavan wrote in her blog. “Dunkin’ had a decent amount of customers as well.”

She gave the employees a “massive tip” and shared her story with the world.

“The company slogan ‘America runs on Dunkin’ has taken on a whole new meaning for me,” she concluded.

The scene played out throughout the affected areas where super storm Sandy knocked out power to a record 8.5 million homes across 21 states, the hardest hit being coastal New York and New Jersey. In cases where Dunkin’ Donuts restaurants had power, lines formed outside, with people desperate for not only Wifi, heat and coffee, but companionship as well.

“Customers were looking for the basics,” said franchise owner Scott Campbell, who owns 46 restaurants in Queens and Nassau County. “They love the routine; it’s part of their lives. They seek you out because it’s stable to them. It’s what they know and it’s comforting.”

The storm forced Campbell into disaster mode — from getting restaurants back online to opening a new location by Kennedy Airport — but he made sure customers, first responders and those in shelters were taken care of with Dunkin’ Donuts products, he said.

“If you’re going to give something, you want to give back to the community,” Campbell explained. “It wasn’t all about making money, it was about giving back.” 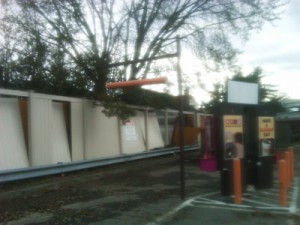 Outside damage to Rizwan Sheikh’s shop on Austin Blvd. in Island Park, NY is minor compared to the inside. Seawater flooded the entire restaurant.

Rizwan Sheikh, who owns a network of five stores on Long Island, lost two to flooding, and had another three without power for days. One store had no electricity for two weeks. And because he lives in Oceanside, Sheikh lost power in his home for 14 days as well.

“We had some tough times,” Sheikh said. “The good news is nobody got hurt.”

He’s “exploring the options” with FEMA and other organizations to rebuild the restaurants damaged by flood since he lacked flood insurance.

“I called up my insurance company and said I want every kind of insurance — flood, hurricane, earthquake. She said, ‘You don’t need earthquake,’ and I said, ‘I don’t care, I want it’,” he said with a grim laugh.

Many of his employees had little or no power in their homes as well and suffered through the long lines obtaining gasoline for their cars.

“Hats off to my crew members,” Sheikh said. “Most had lost everything and worked 10 to 12 hours a day with a smile on their faces.”

Mo Khalid, a franchise owner in Newark, N.J., didn’t suffer physical damage to his 12 stores but the power outages kept 10 of them in the dark. He didn’t rent a generator before the storm hit; afterwards couldn’t find one.

“I called all the way up to Canada to see if I could rent generators, and then all the way down to Florida,” he said. “I had no luck renting something big enough to run a Dunkin’ Donuts.”

Khalid says he lost $200,000 worth of cash flow because he wasn’t able to bring his stores back online.

Another complication Khalid faced was getting employees in to work, since many of them lived in the neighborhood and were facing the same lack problems—no electricity and no gas for their cars. None of his locations are in low-lying areas so flooding wasn’t an issue, but gasoline was hard to find because gas stations in the area weren’t able to pump for lack of power.

“We scrambled,” Khalid explained. “We went to people’s houses to pick up employees. We drove them back to the stores. We had our own personal cars and cab service for the employees. And then, the other stores that were closed, whoever was willing to work called me, and then I sent different cars to pick them up and bring them to these stores because we needed a lot of people to work behind the counters to handle the high volume.”

Many people in the New York metro never faced a storm aftermath as disruptive as Sandy’s. Scott Campbell learned lessons from his family who lived through Hurricane Katrina in 2005. After Sandy’s storm surge, Campbell mobilized to assist employees living in the impacted area who had no electricity at their homes and no access to gas for their cars.

He also needed to move product around his network of restaurants, carrying donuts from store to store, filling in need where it appeared. “We weren’t sure where the demand would kick in,” he said. “It was all hands on deck.”

Because he lives north of New York City—away from the hardest hit areas— Campbell had access to gasoline and would drive home, fill tanks and return them to the city. 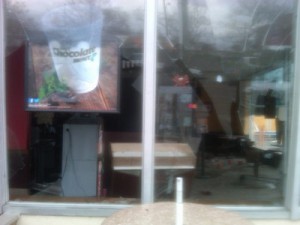 Rizwan’s Island Park, NY location was also a total
loss after seawater flooded the inside.

The storm also challenged the DCP’s distribution center in Westampton, NJ, which supplies 2,000 Dunkin’ Donuts shops in New York, New Jersey and Pennsylvania. Despite the impact of Sandy on the region – power outages forced the facility to run on generator power for a week, trucks had to be re-routed because of flooded roads and stock ran low on certain items because suppliers couldn’t make their deliveries – the DCP did its job. Chief Executive Kevin Bruce says the DCP brought in extra drivers, worked with its fuel supplier to keep trucks gassed-up and kept the Dunkin’s running.

“Overall the members were pleased,” he said.

A sentiment echoed by Long Island’s Rizwan Sheikh. “They were very, very helpful and they did everything they could to get supplies out here.”

But an event of this magnitude did cause disruptions. On his regular schedule, DCP delivers once a day to Campbell’s restaurants. After the hurricane, Campbell requested DCP meet a modified delivery schedule that would allow him to produce all day to meet increased customer demand. Campbell chose products that were fast and easy to create and Dunkin’ Brands worked with him, he said. Half of his stores are gas stations, so the market side supplied themselves, another plus. “It (the gas station franchises) made it easier for us if DCP couldn’t make it to us.” 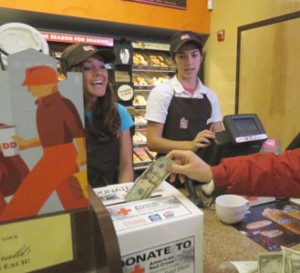 Rhode Islanders donating to the Red Cross relief effort for
Hurricane Sandy victims at a Dunkin’ Donuts in Cranston.

One of Mo Khalid’s shops in Newark became a refuge. The shop had power because its electric lines were realized the shop had power, they lined up to get in. They were seeking shelter in a place with electricity, food and drinks.

“Imagine, [that shop was] the only food place where you could eat, use a bathroom and charge your cell phones,” said Khalid. “So, it was kind of a rescue place for the people to come, get a cup of coffee, and get food for the kids.”

“It was chaotic,” said Sheikh of his Long Island shops. “The lines were out the door.” He says he let everyone use the facilities, access a phone and charge their phones. “We tried our best to accommodate them. The truth was I felt guilty charging them for coffee. These were my neighbors, the people down the street. But at the end of the day I had to make a living.”

Campbell understands the needs that arise after a storm since experiencing his family’s difficulties after Hurricane Katrina. But he has a new outlook on the value of his franchises, whether as a place for necessities such as power and a hot cup of coffee or the opportunity to be with others.

“People really, really utilized us,” he said. “Probably more than we would have understood before this.”