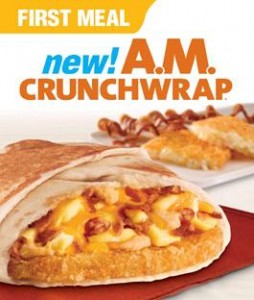 There is much to report on the growing list of Dunkin’ competitors as Hardee’s announced this week that they are returning to the northeast after a 20 year absence.  A 200 unit franchise agreement was announced with stores slated for the New York, New Jersey and Connecticut markets.  With their fresh biscuit platform, the St. Louis-based company generates 30% of sales at breakfast.  In addition, Taco Bell announced that it will launch its new breakfast menu sometime early in 2014.  Elsewhere, Krispy Kreme has announced a deal where they are now selling Krispy Kreme coffee on the shelves in Sam’s Clubs across the country.  Tim Horton’s has added steak to its lunch menu, and Keurig has announced that it will open its first bricks and mortar coffee store in Burlington, Massachusetts in November.