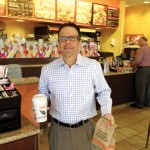 Dunkin’s Choices Keep it a Strong Competitor for Breakfast Business

My morning workout is one of the few things I do for myself each day. The other is stopping at Dunkin’ Donuts for a healthy, low-calorie, breakfast on the way home,” says Sherri Horlink. The slender blonde, soccer mom from Natick, Massachusetts, enjoys an egg-white veggie flat bread sandwich when her busy schedule allows time…

When Bill Rosenberg opened the first Dunkin’ Donuts in 1950, the menu was not a major consideration.Rosenberg offered customers great tasting coffee and donuts, and the people who lived and worked near Quincy Mass. began a tradition of starting their mornings off with this staple. For almost two decades Dunkin’ was primarily known for coffee and donuts.…

In a new 30-second commercial from agency Crispin Porter & Bogusky, BK’s mascot, the King — armed with a flashlight and donning a hoodie — breaks into McDonald’s headquarters in the wee hours of the morning to copy the recipe for McD’s Sausage McMuffin with Egg sandwich. A voice-over says, “It’s not that original but it’s super affordable … egg, sausage and cheese on a toasted English muffin.” DDIFO MWatch the commercial….