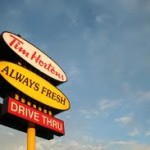 A Canadian court ruling involving Tim Horton’s may be cautionary tale for Dunkin’ Donuts franchisees. The case was brought by a group of Tim Horton’s franchise owners after they were forced to sell items at below cost and switch to more expensive pre-baked donuts from a supplier affiliated with the franchisor. Franchise attorney Eric H. Karp of the Boston firm Witmer, Karp, Warner & Ryan, LLP, closely followed this case and kept DDIFO apprised of its developments. After the decision was announced, DDIFO commissioned him to write a comprehensive summary of this ruling.

Robert Gibbens writes in The Gazette that Tim Hortons Inc. said Friday it is boosting restaurant prices in Quebec and the Maritimes next month to offset higher operating costs. The fast-growing franchise chain has 2,971 units in Canada and another 556 in the United States.