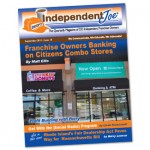 A unit of Citizens Financial Group recently reported a full-year net loss of $600.4 million for 2009 after charging off more than $2 billion in bad loans. RBS Citizens, the No. 2 retail bank in Massachusetts, disclosed the loss in a financial report filed with the Federal Deposit Insurance Corp. The bank was not available to comment for this story

It’s a first for franchise owner Neal Faulkner, as well as for Dunkin’ Brands and Citizens Bank, but it may not be the last: a Citizens Bank branch and ATM has opened inside an existing Dunkin’ Donuts shop. With a heavy emphasis on customer convenience, this partnership represents innovative and ground-breaking thinking on the part of both brands and it just might prove to be a match made in heaven. Both Citizens and Dunkin’ are happy with the early results in terms of increased foot traffic and activity.

Tim Mclaughlin reports in the Boston Business Journal that Citizens Bank could get a new owner if the European Commission forces parent company Royal Bank of Scotland to sell more assets than what executives originally anticipated.
RBS, whose shares fell as much as 13 percent Monday, said in a brief statement that negotiations with the EC will include some divestments not initially contemplated.

Citizens Bank said Tuesday it was opening its first branch inside a Dunkin’ Brands store. The new operation will be at 815 South Main St. in Bellingham. The branch will offer window teller service as well as private offices for loan applications and other specialized services. The branch will be open seven days a week, while an ATM is also available in the eatery.