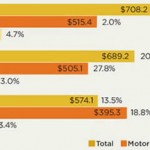 The 2013 Convenience Store News study notes that C Store foodservice sales grew at plus 6%, far outpacing the rate of growth in the traditionally defined restaurant space in general.  More specifically, average foodservice sales per store were $185,000 in 2012, up 6.9% from 2011, on top of a 6.3% increase over 2010.  It was…

Abbie Westra reports at CSP that Quiznos has only been in the convenience channel since last year, and already the sandwich chain is honing in on crucial dayparts and creating platforms specifically for the 175 c-store locations. Today, it rolled out a convenience-specific breakfast menu to those stores and is planning for a grab-and-go addition in its second quarter.

Linda Lisanti writes in Convenience Store News that there’s good news and bad news in the coffee category these days.

Restaurants and Institution Magazine reports that Dunkin’ Donuts, America’s favorite every day, all-day stop for coffee and baked goods, announced today the signing of a multi-unit store development agreement with Roadrunner Markets for seven new restaurants in Tri-Cities, TN and the surrounding areas of Northeast Tennessee and Southwest Virginia. The first two locations are anticipated to open in 2011 and the remainder by 2015. Dunkin’ Donuts development in Tri-Cities is part of a steady and strategic growth strategy, which includes expanding in existing markets while entering new cities across the country to help drive the leading coffee and bakery chain’s growth.

Circle K is breaking new ground this year by offering franchise opportunities to business owners in Florida who recognize the value of the Circle K brand. For your information Circle K is also owns approximately 14 Dunkin Donuts Franchises in the Cleveland Ohio Area

Anna Huddleston reports in Las Vegas Business Press that while other retailers are scrapping growth plans, the $624 billion convenience-store industry is getting even more aggressive in pursuit of new markets. 7-Eleven recently announced plans to add 200 stores nationwide by the end of the year. Drugstore chain Walgreens is refurbishing its stores to sell liquor and wine. Las Vegas chains are adding properties as the weak commercial real estate market opens new areas and technology makes it easier to tailor inventory to each store.