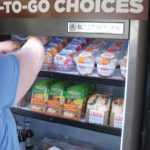 Ever since it started offering deli-like sandwiches to its customers in 2012, Dunkin’ Donuts has been in a constant state of change—searching for the right meat-cheese-and-egg combos to boost breakfast sales and provide all-day companions to its growing roster of beverages. Now, with snacks representing approximately 60 percent of sales, Dunkin’ Brands is trying out…

Elissa Elan writes at Nation’s Restaurant News that four restaurants chains, including Subway and Starbucks, were among 16 companies that pledged Monday to voluntarily cut down on the amount of sodium in their products as part of a national initiative aimed at reducing salt consumption by 25 percent over the next five years.

Fast Casual reports that brothers Dhavel and Hetal Patel have signed a master franchise agreement to open 20-plus Freshii stores in parts of New York City. The Patels already own and operate seven Dunkin’ Donuts restaurants in northern New Jersey.