Bloomberg BusinessWeek Reports that The Obama administration is launching a new round of worksite investigations, maintaining the pressure on businesses to make sure they are hiring only people who can legally work in the U.S. 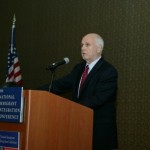 The story that Kevin McCarthy told at the National Immigrant Integration Conference (NIIC) on September 30, is one that is familiar to most Dunkin’ Donuts franchise owners, particularly those who have been in the system for a while. It is their story – how hard working immigrants could build something for themselves, their families and for the company that gave them the opportunity.

Nation’s Restaurant News reports thet Arizona’s strict anti-illegal immigration legislation that was signed into law last month has provoked a growing number of boycotts and concerns among hospitality operators in the state.

Paul Frumkin of Nation’s Restaurant News reports that the battle over immigration reform got off to an earlier start than anticipated when a group of lawmakers introduced a comprehensive bill into the U.S. House of Representatives this week.