One can’t help but wonder on the correlation between Wal-Mart giving in to public pressure last February and agreeing to raise their minimum wages across the country and their more recent announcement that the world’s largest retail company will close 154 stores across the nation and an additional 115 elsewhere around the globe.  The US… 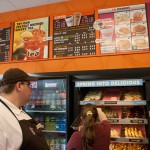 For the 48th consecutive month, the restaurant industry posted a net monthly gains in jobs created for a total over that time frame of over 1.2 million jobs, posting an increase of 21,000 jobs in February.  Notwithstanding the increases, according to the National Restaurant Association February 2014 tracking survey, the restaurant operators still have a…

Penny Starr reports at CNSNews.com that Tom Donohue, president of the U.S. Chamber of Commerce, said at the organization’s headquarters in Washington, D.C., on Wednesday that Americans and not the government are the answer to the country’s economic woes. At an event Wednesday to launch its ‘Dream Big’ campaign to promote the American free enterprise system, U.S. Chamber of Commerce President Tom Donohue said that people, not government, will create the jobs needed for economic recovery.