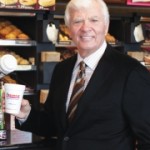 Former Dunkin’ Brands Chairman Jon Luther was presented with the 2013 Norman Brinker Award in recognition of his illustrious career and his focus of helping people succeed.  The award, given by Nation’s Restaurant News, was presented last week in Dallas.

Janet Sparks reports at BlueMauMau that after a supreme court judge made his decision last May that Patrick LaFontaine could move forward with fraud claims against Dunkin’ Brands, Inc. and other defendants, the professional hockey player scored another victory last September.

Luther, who is based in Massachusetts, was named chief executive officer of Dunkin’ Brands in 2003. He added the title of chairman in 2006. In 2009, Luther moved into the role of executive chairman.

In QSR Magazine’s September issue cover story, Carolyn Walkup writes: the midst of the worst recession in decades may seem like a tough time to take the reins of a restaurant company that sells discretionary treats not needed in the everyday diet. However, Nigel Travis, whom Dunkin’ Brands hired to head its Dunkin’ Donuts and Baskin-Robbins brands in January 2009, quickly showed he was up to the task.

Janet Sparks writes at Blue MauMau that after Patrick LaFontaine, professional hockey player and inductee in the Hockey Hall of Fame, filed a lawsuit against Dunkin’ Brands and the principals of its bankrupted franchisee Kainos Partners Holding Company, a Nassau judge ruled last week that fraud claims can now move forward against the defendants.

Jon Luther and four others inducted into Mass. Hospitality Hall of Fame