Superstorm Sandy Opens Opportunities for Growth in the Rockaways

Nobody ever thought it would happen. After all, hurricanes aren’t supposed to hit Queens, New York. But in October, 2012, Hurricane Sandy had a mind of its own. This Category 3 Superstorm became one of the most deadly and destructive hurricanes of the Atlantic season and the second costliest hurricane in United States history, to… 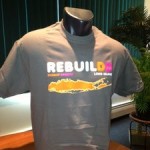 Circling back to DDIFO’s original reason to take the National Conference to Atlantic City this year, Dunkin’ this week launched a line of new, colorful t-shirts to help Long Island recover from last year’s devastating hurricane.  You can read about the REBUILDD T-shirts being sold to benefit Long Island Cares, Inc. here.