Maybe it doesn’t qualify under Dunkin’ Doings any longer, but we note that former Dunkin’ Donuts President Paul Twohig has resurfaced as the new Chief Operating Officer for Mod Super Fast Pizza Holdings, effective immediately. Twohig, who has served on Mod’s advisory Board for the past 10 years, announced his retirement from Dunkin’ in April… 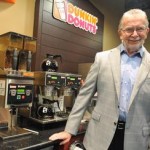 Starbucks Settles With Ex-Exec Who Went To Dunkin

Dow Jones Commodities News Select reports that the Starbucks Coffee Co. announced Friday night it had reached a settlement with Paul Twohig, a former executive who ran the company’s retail operations in the U.S. southeast who left to take over as brand operations officer for rival Dunkin’ Donuts parent Dunkin Brands. Starbucks sued Twohig, claiming he had signed a noncompete agreement, according to a report published Oct. 7 in the Boston Business Journal.