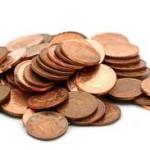 It was noted at NPR that a rogue Dunkin’ Donuts franchise owner “decided to eliminate the use of pennies” — the latest salvo in the long-running, low-grade war on the penny. Dunkin’ HQ was called by NPR for comment. In an email, the company told NPR that the store has abandoned the ban.