Another interesting survey was released this week, the annual survey by the Gallup Organization to measure how proud Americans are of their country. It seems the great political divide is definitely real as only 32% of Democrats were “extremely proud” of their country, and 42% of those identifying as independent, but 74% of Republicans placed…

We’ve spent a lot of time and space reporting these election results to you this week primarily because they will not be going away.  To the contrary, advocates of of anti-business measures will continue to push them through whatever vehicles may present themselves.  Recall that the minimum wage initiative began with a call by President… 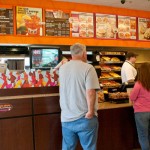 Wouldn’t have thought the notion of a 40-hour work week would be particularly newsworthy, but this past week, the issue was front and center in the weekly Republican Radio Address as US Senator Susan Collins (R – Maine) said that because of Obamacare and the implications of the 30-hour work week threshold, many workers would…

Republicans rammed an election-year, $46 billion tax cut for most of America’s employers through the House on Thursday, ignoring a White House veto threat in a debate both parties used to show voters how they would bolster the economy.