If it keeps up at the current pace, we’ll have to consider adding it as a weekly feature, but since the slime of the Harvey Weinstein sexual assault/harassment stories came out, there has been a fairly steady drumbeat of terminations and resignations in a host of industries across the country – some of which may…

In the wake of the drumbeats of alleged sexual abuses and harassment of women by movie mogul Harvey Weinstein and Amazon Prime Videos executive Roy Price, we noted that SEIU, the labor organization self-described as “united by the belief in the dignity and worth of workers” suspended Executive Vice President Scott Courtney over nepotism charges.…

The Equal Employment Opportunity Commission (EEOC) has broadened the fight to eliminate discrimination in the workplace by filing lawsuits against two employers for sexual harassment against a gay and lesbian worker.  The commission has ruled in the past that the anti-discrimination provisions of the Civil Rights Act of 1964 are expansive enough to protect gay… 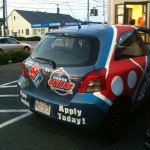 In an important decision in the case of Taylor Patterson v Dominos Pizza rendered last week, the California Supreme Court ruled that Domino’s Pizza could not be held liable for sexual harassment that was alleged to have been perpetrated by a store manager.  The decision is the polar opposite of the ruling issued by the…

Vic Walter, Angela Hill and Brian Ross report at ABC News that an “alarmingly high” number of high school students are reporting sexual advances from their adult bosses and other supervisors at some of the country’s best known fast food operations, according to an official of the Equal Employment Opportunity Commission.