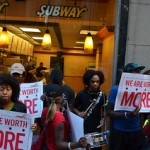 The Wall Street Journal reported this week on a plan by SEIU (Service Employees International Union) to push another wage strike by fast food workers next week across the country.  In another article, it is reported that McDonald’s workers in up to 150 cities across the US are planning a strike for this Thursday and…

Crisis experts have speculated on the true impact that recent strikes among the fast food industry may have had on the industry.  The strikes, which have been reported to have occurred in some 50 cities across the US, were called to advocate for an increase in the minimum wage to $15 per hour.  One expert…

Perhaps inspired by the President’s efforts, fast food workers are organizing a national strike for August 29, 2013, urging an increase in the national minimum wage to $15/hour.

The Patriot Ledger reports that a United Food and Commercial Workers union official said Stop & Shop employees who belong to five UFCW locals voted today to authorize a strike if contract negotiations with the Quincy-based supermarket company fall apart. The workers’ contracts expired at the end of the day on Saturday, but the union leadership…