A Battle in Canada Over Drive-Through Idling

KATE GALBRAITH reports in the New York Times Canadians are debating whether or not the drive-through lanes at Tim Hortons, a doughnut and fast-food chain, should be part of an anti-idling ordinance in Kingston, Ontario. According to Bill Glover, a councilor for the city, Kingston plans to restrict development of future drive-throughs. Tim Hortons, he said in an e-mail message, “seems to be rather belligerent about this” and is threatening to appeal the plan.

Robert Gibbens writes in The Gazette that Tim Hortons Inc. said Friday it is boosting restaurant prices in Quebec and the Maritimes next month to offset higher operating costs. The fast-growing franchise chain has 2,971 units in Canada and another 556 in the United States.

Noreen O’Leary writes in Brandweek that Tim Hortons the donut and sandwich chain, huge in Canada, but largely unknown here, has been expanding its U.S. footprint of late and appears to be using the market as a testing ground. So far, Tim Hortons spend has been modest. Its outlay on measured media last year was $12 million in the U.S., which is a good $100 million shy of what Dunkin’ Donuts spent. But the chain, named after a star hockey player, has been throwing body checks at its rival lately.

Tim Hortons to Open Fort Knox Coffee Shop as It Expands in U.S.

Bloomberg reports that Tim Hortons Inc., Canada’s largest fast-food company, is opening a coffee shop at Fort Knox, its first on an American military base, as it expands in the U.S. The coffee-and-doughnuts seller won a 10-year contract to operate the café on the Kentucky base, 30 miles southwest of Louisville, Chief Operating Officer David Clanachan said in a telephone interview. 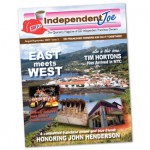 We are pleased to introduce to you DDIFO’s second issue of Independent Joe, our quarterly magazine for Dunkin’ Donuts Franchise Owners.

Read the magazine online, just start flipping the pages…..Check it Out!