Neal Angelini reflects on his three decades as a franchisee 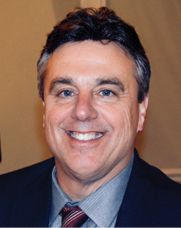 The year was 1989. Microsoft released its Office suite for the first time, “The Simpsons” made its television debut, George Herbert Walker Bush was inaugurated as the 41st President of the United States and Neal Angelini entered the donut business.

Born and raised in Connecticut, Angelini already had stints managing machine shops, building and installing kitchen cabinets, and building specialized equipment for children who couldn’t walk or had difficulty doing so. Now, he was seeking a change and looking for a recession-proof business to buy.

He thought he found it with Mister Donut. “What’s more recession-proof than coffee and donuts?” Angelini says.

With no prior experience in the food or retail business, he purchased a very small Mister Donut store – all 1,500 square feet of it – at 381 Main Street in East Haven, Conn. 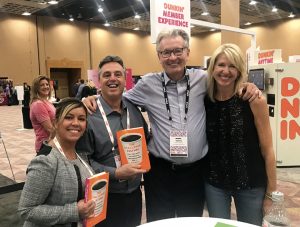 Now, almost 30 years later, Angelini still looks back on those early days with a scowl.

“I remember putting in incredibly long hours at the store, only to have to go back at night to make the donuts,” Angelini recalls. “I went many weeks without a paycheck working my butt off, but eventually my perseverance started paying dividends.”

Perseverance and, perhaps, a little luck.

Dunkin’ Donuts ended up purchasing Mister Donut in 1992. Two years later, Angelini converted his Mister Donut store to a Dunkin’ shop, a step that strengthened his business overnight and probably saved it from ruin.

“I will never forget the first day we opened as a Dunkin’ Donuts after I converted the store. We had more sales in the first six hours
of business than we had on our busiest day as a Mister Donut.”

What does he attribute that to? “The Dunkin’ brand, for sure,” he says.

Along with its brand, Dunkin’ instituted new systems that also helped Angelini immensely.

Thankfully, he says, things began to really pick up. As a result of his initial success, Angelini was able to grow his Dunkin’ footprint.

Two years after converting his Main Street Mister Donut to a Dunkin’, Angelini developed and opened a second store in East Haven in 1996. A year later, he opened a third.

In 2002, he purchased an old bank site down the street from his original store and he relocated the shop. This building was much larger than the original location, easier for cars to access and it had a nice drive-thru, all of which contributed to a 65 percent increase in sales for Angelini.

And he wasn’t done yet. In 2006 and 2008, he opened two more stores, for a total of five. In 2012, he decided to sell the two locations that lacked a drive-thru. Today, he still owns and operates three locations: two in East Haven and one in New Haven. 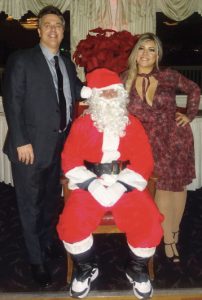 Some Things Change; Some Stay the Same

As he looks back over the last 25 years as a Dunkin’ Donuts franchisee, Angelini has seen plenty of change. There are new systems and processes to streamline operations. There was also the move to baking and finishing donuts in central kitchens instead of in the stores—a change Angelini was very grateful for. Even with all that’s changed, Angelini notes that one basic – yet critical – tenet has stayed the same: taking care of his employees his employees.

To Angelini, his employees are an extension of his family. As such, he has always focused on treating them well. They, in turn, treat the guests well.

“I think my biggest success is how we’ve trained and developed a team of great staff and managers who are loyal to the stores and to our customers,” says Angelini. “They truly are what keeps our business running and our customers coming back every day.”

In addition, Angelini says he never takes the business for granted and never gets lax. He admits he can do most of the work from the comfort of his home office these days, yet he still goes into the stores every day to show his face and stay involved.

Another key component to a smooth-running and successful business is the emphasis he puts on communication. He schedules regular meetings – one for his managers and the other for the crew – twice a month to ensure everyone is on the same page.

Plus, advancements in technology have helped him be able to better communicate with his employees on a day-to-day basis. Angelini’s son Peter, who is general manager for the family’s network, recently created and implemented a streamlined communications system for each of the three stores.

Very quickly, this system has become part of their culture.

“I didn’t want to simply put this into place and not use it the way it’s intended to be used,” Angelini says. “I’m a big believer in using systems – whether brand or your own – so they can help you.”

Using them, they are.

The IT dashboard Peter developed allows each store manager to input a slew of information about their particular store, including employee schedules, hire dates and birthdays (more on that in a minute).

What’s more, the dashboard illustrates the product mix for each store in each category, and how it compares to the previous week, month and year, a tool that Angelini notes is invaluable.

“The better the systems you have, the less fires you have to put out. That enables me to focus on other aspects of the business, like the front of the house,” he says. 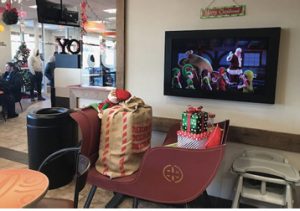 Angelini is proud of the high retention rate he enjoys from his staff, and he goes out of his way to let each one know how much he appreciates them.

Take birthdays. One reason he wanted the dashboard to record the birthday for each employee is so that it can be celebrated.

On an employee’s birthday, not only will the crew sing “Happy Birthday,” but that employee also receives a birthday cake and a monetary gift from Angelini.

Every December he rents out a banquet room at a local hotel and hosts a holiday party for his 68 employees and their families, complete with a visit from Santa Claus.

Does he realize he goes above and beyond what others in his industry do? “Absolutely, but I have an amazing, loyal staff that keeps the business running, and our guests coming back each and every day. Why wouldn’t I treat them like family?”

And he wants his guests to feel like family, too, with each visit.

“I want our guests to feel comfortable and special in our stores. I want it to feel as if it’s their home away from home.”

Angelini’s biggest store, the one that he re-opened in the old bank building on Main Street in 2002, underwent an extensive renovation and expansion in 2016 that includes adding booths, soft seating, high seating, bar-style seating, a large fireplace, and TVs, including one dedicated to running aquarium videos and special continuous loop videos for different holidays.

This 4,200-square-foot store also has an outdoor covered patio with seating for about 20, and a conference room that guests can rent for a small fee.

And, let’s not forget about the Kids Corner, complete with small tables and chairs, coloring sheets and other games for the kids.

Along with providing a nice place to sit, Angelini’s stores also are deeply rooted in the community, partnering with local schools throughout the year to host their fundraisers, and supporting the local police and fire departments whenever they can.

And just this past fall, Angelini’s stores teamed up with other local Dunkin’ franchisees from Branford, Guildford, Hamden, Killingworth, Madison, Milford, New Haven, North Haven and West Haven to create a special “turkey donut,” donating a dollar to a local food bank for every unit sold. As a result of these efforts, the group raised $8,000.

Throughout it all, Angelini is most grateful for the support of his family. Although his wife, Elizabeth, is not officially on the clock, she frequently is on-site at the stores, lending her support to the staff in any way she can.

And will Angelini’s three young daughters, aged 9, 10 and 13, join Peter, age 30, one day to keep the business in the family?

“I sure hope so,” says Angelini.

For now, Angelini has no plans to slow down. He’s not sure what the future brings and would not rule out growing his Dunkin’ network more. After all, he’s enjoyed his 30 years in the coffee and donut business and is glad he had the good fortune to join the Dunkin’ brand. And, so has his staff.