By AdminPublished November 17, 2015Category From the Executive Director

For those of you who are not football fans or are perhaps too young to remember Leon Lett and his embarrassment in Super Bowl XXVII (you can Google it for the particulars), the 2015 Track & Field World Championships held this summer in Beijing, China give an updated version of that important life lesson: keep working as hard as you can for as long as you can until your goals have been accomplished.

American distance runner Molly Huddle was a favorite to earn a medal in the 10,000 meters and at the top of the stretch, she was in great position to do just that. But, a funny thing happened on the way to the medal stand. Huddle slowed down as she approached the finish and raised her arms in premature celebration just yards from a bronze medal. As she let up in her push to finish – ever so slightly and at the very last second – teammate Emily Infield pushed on and took the third place finish!

I believe there’s not only a life lesson about dedication and perseverance in stories such as this, but there may be a valuable business caution there for Dunkin’ franchise owners as well.

In the face of some less than stellar results, Dunkin’ is facing some earnings challenges along with volatility in its stock price. Just a few months ago, the report was quite different and the trajectory of the stock price meant that all was well. But things can change, and they often do – quickly, and with little or no warning.

Franchise owners are confronting new challenges on a daily basis – whether its minimum wage hikes of close to 70%, paid sick leave mandates or unworkable scheduling prescripts, franchise owners regularly face challenge after challenge – on ever-shrinking margins – to keep their stores operating efficiently and successfully. But it is just as important that they remain equally diligent in protecting their investment as relates the franchisee-franchisor relationship.

Most Dunkin’ owners believe that when they bought into the system, they bought a brand name and a quality product that would be the ticket to their success. That’s still largely true, but it’s qualified by the fact that the corporate parent has a great deal of control over their business decisions in order to protect the integrity of the brand – ostensibly, a win-win proposition so long as there is a mutual respect for the needs of both parties. That respect was evident in recent years, with the creation of a national supply cooperative and the agreement on K-cups, among other things. But will that cooperation continue unabated? Is that same level of respect present today? Will it be there next year, in three years, or with your next renewal? We may be getting close to the finish line – and the medal stand – but is it safe to let up?

Elsewhere in this issue you will read more about the current status of the NLRB joint-employer ruling and some different opinions on what that ruling means for franchisees as well as franchisors. The article speculates as to why that ruling may have come about in the first place and whether the result it could yield is beneficial or detrimental to franchisee business interests. Specifically, as franchisors continue to tighten controls on franchised businesses with the imposition of more rigid and restrictive provisions in the franchise agreement and additional restrictions and mandates being incorporated in the operation manual, the franchise owner “loses” more of the autonomy he perceived he bought when first signing on.

Franchise owners in California recently earned a great victory with enactment of the California Franchise Relations Act. They didn’t let up when it looked like they won the issue in 2014 (the Governor vetoed the bill at the last minute), nor did they let up when it looked like they won this year, with unanimous votes in both branches. They remained diligent and fought to the finish line with the Governor finally signing the bill many weeks later – even though things looked good, they took nothing for granted!

DDIFO is your independent franchisee association and we’re not letting up until we achieve our goals as well – the best representation we can provide our franchise owner members, and in the most professional manner! 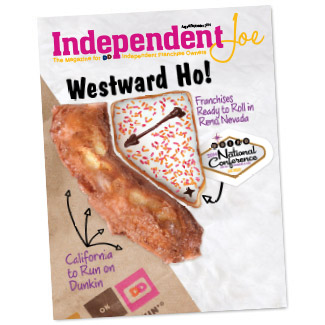 In that vein, last month the 2015 Folio: Eddie & Ozzie Awards chose Independent Joe as national winner in the category of Cover Design. Our August/Sept. 2014 cover, “Westward Ho,” which promoted the brand’s western expansion and the 2014 National Conference, was picked by more than 300 judges as the best cover in the association/non-profit magazine category, beating out Kiwanis magazine, Clinical Laboratory News and Engineering Inc., among others.

For more than 20 years, the Eddie & Ozzie Awards have recognized excellence in magazine editorial and design across all sectors of the industry. Although a leader in their field of magazine recognition, they haven’t rested on their laurels and as honored as we are at DDIFO for being included in their 2015 list of winners, we’re not going to either. To the contrary, we’re going to continue our race to best represent the interests of our Dunkin’ franchise owners.

I want to especially thank and congratulate our Creative Director, Caroline Barney Cohen, principal of CPDesigns, for her consistently outstanding work not just with the magazine, but with our website and marketing materials as well. We’ve set about remaking the image of DDIFO and enhancing the professionalism of our organization in every regard. Whether we’re nearing that finish line or not, we’re going to keep pushing through until our goals – and those of our members – are achieved!

Now, enjoy this issue of the award-winning Independent Joe . . .