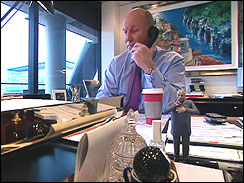 At the recent DDIFO meeting in Worcester, MA, Washington D.C. lobbyist Rick Berman of Berman & Co. prompted considerable discussion about what steps owners can take to maintain a union-free shop.

The well-known business lobbyist, that 60 Minutes reffered to as as “Dr. Evil,” outlined the progress unions are making in passing the so-called check card legislation in Congress. That legislation, if passed, would make it easier for unions to organize businesses, including restaurants, he said.

He warned that some restaurants and fast-food shops are ripe targets for employee organization.

Workers at two Dunkin’ Donuts CMLs have been organized and several owners have expressed concern about union activity at their shops and are considering steps to work with employees to reduce the impact of the union organizer’s sales pitch. Here is what one DD franchise owner is doing and some general advice on what an owner can and cannot do if his shops become targets for union organizing.

The franchise owner, who requested that he not be identified, is working to reduce any misinformation and miscommunication that might lead to an organization effort within his shops.

The owner assumed he had some unhappy employees. The economy in 2008 forced him and other store owners to cut back on benefits and lay off some workers. But he said he did not know exactly why the employees were unhappy.

The issues may be about more pay, better benefits or more security. But the unhappiness in the shops may be the result of other issues, he said. Many employees understand that the store revenues are down because of the economy and accept lesser benefits and seeing some workers laid off. They may be more concerned about other workplace issues, he said.

“Now is the time for us to reconnect with our employees in efficient and knowledgeable ways,” the owner said.  “We can’t sit back. We have to be proactive, not reactive.”

But an owner or manager can’t be proactive without thoroughly understanding what the challenges are, he said.

The franchise owner did not think that “just having a conversation” with his employees would be effective. Some employees fear management, he said. They are afraid they may lose their jobs so they won’t speak up.

To get accurate insights and perspectives on their thinking, the owner hired an independent consultant to “take the temperature” of the employees’ mood, determine the real issues impacting them and assess the relationship between employees and management.

“I want to get out in the open what the real problems are,” he said.

The consultants are interviewing each employee and granting them anonymity so the employee feels free to discuss any issue of concern.

From the interview process, the owner is finding that some employees are very poorly informed about the business. Some want to be more engaged in the decisions that impact them and their work environment. They want to know more of the reasons a decision is made and how it will affect them and the store. And they want to be asked their opinion, he said.

“Empowerment, inclusion and education are the big things,” he said.

One of the big issues that came out of the interviews was the importance of health care benefits, he said. Employees need to understand health care better, he said. For example, if the insurance company raises the co-pay by $10, it may save an increase in the premium. But employees don’t know that.
“They assume it is management’s way to put more money in their own pockets,” he said. “It is the half truths that really hurt. The unions feed on that belief, that lack of understanding.”

The information derived from the interviews also gives management a guide to understanding the issues that a union might attack.  For example, he said there seems to be a lot of misunderstanding about the card check process.  In the past signing a card was just the beginning of the organizing process. Now if the new federal labor legislation passes, signing a card is voting for the union.

“We need to explain what will happen when the union comes in,” he said. Employees will have to pay union dues, for example.

Providing good communication and allowing employees to understand the issues better “puts employees in a better mood,” he said. He expects that as a result there will be less worker turnover.  “We have to treat our employees with respect and quality,” he said.

He plans to bring the consultant back every six months to test if the new employee communication is working.

In general, owners need to understand the labor laws in working with their employees. Under both the National Labor Relations Act (NLRA) and the Labor Management Relations Act (LMRA), owners cannot discriminate against employees for union activities. Owners can not discipline employees solely because they support the union. And they can’t offer pay raises to employees who oppose the union.

Employees have free-speech protections. An owner can not discipline an employee for discussing union organization, nor can he punish an employee for complaining about pay, benefits or working conditions.

Any policy that limits what an employee can talk about to other employees should be restricted to confidential employee medical information, trade secrets and other information in which a solid business or legal reason requires secrecy.
Also, owners must allow employees to talk with union organizers during breaks or during non-working hours. At the same time, owners can use those breaks to make their own arguments to employees about rejecting a union organizing effort.

If a union targets an owner’s shops, it is recommended that the owner hire an attorney with expertise in labor relations. The attorney who negotiated the shop’s leases probably should not advise about union activities.

Other best practices to consider:

Don’t get angry with employees for union activity. Present management’s case to the employees in an unemotional manner. Don’t threaten employees.

The NLRA requires an owner to allow pro-union insignias on shirts and jackets. Don’t spy on employees to determine how they’ll vote.

An owner is free to remind workers of their current pay and benefits. Educate employees about the definitions of terms, such as “dues check-off” and “union shop.” Remind them that unions will require dues, fines and assessments, and that the employees would lose their paychecks if they decide to strike.

As one of Rick Berman’s anti-union advertisements says: “You know what I love? Paying union dues, just so I can keep my job. Nothing makes me feel better than knowing that I’m supporting their fat-cat lifestyles. Thanks, union bosses!”