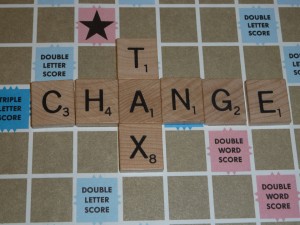 Among the many challenges of owning a small business are the year-to-year tax changes that can affect your bottom line and complicate your accounting. And this year was especially anxiety inducing as Congress and the President wrangled over a plethora of expiring tax breaks until the last moments of 2012, leaving individuals and business owners unsure of what to expect as they rang in the New Year.

And after the bargaining ended and the dust had cleared, the good news is that not much has changed for small business owners. That’s great news, especially as one of the major changes expected was the amount business owners would be able to write off as a business expense with regards to their equipment. The existing amount of $500,000 was anticipated to decrease to just $25,000, a pretty major decline.

Given that franchise owners are required to renovate their stores every five years, a change of this magnitude would require completely rethinking how to classify equipment as an asset.

To defend against this, owners would have had to hire an engineering firm or architect to do a segregation study, adding to the cost of renovating or building new. With the deal struck in the waning hours of 2012, this write off stayed at $500,000, making construction a little less onerous.

So just what did change, and how will it affect you in the coming year? 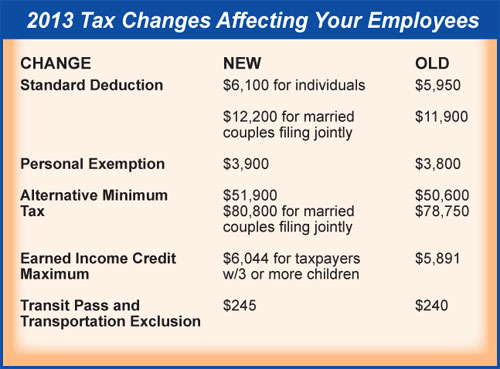 The majority of the changes are primarily aimed at individuals, namely your employees. Which means that it affects you, since many of them may have questions.

The most visible, and immediate, change is the expiration of the 2% Payroll Tax Cut, a change obvious on every employee’s paycheck as of the beginning of the year. The former rate for employee social security tax withholding had been held at 4.2%; unless Congress acts to extend that lower rate, the new rate of 6.2% will stand.

It’s not easy to explain to workers, many of who make minimum wage, that the 4.2% rate was always meant to be temporary, that it was put in place back in December of 2010 as a “payroll tax holiday” designed to stimulate spending. It was only supposed to last one year, and was instead extended through December 2012.

This money goes directly to the support of Social Security, which ultimately will go back to workers, hopefully, when they retire. But that doesn’t matter right now, when it directly affects the amount they take home, which in turn affects how they feel about their jobs and their employers.

Employers have until February 15, 2013, to implement this change, and until March 31, 2013, to correct any underwithholding.

The rest of the changes – including the increase in the standard deduction and personal exemption – will only be seen once workers file their taxes for 2013, a whole year from now, meaning few will notice their tax benefits, instead only seeing the one liability.

On February 11, New Jersey Governor Chris Christie vetoed a bill calling for a $1.25 increase in the state’s minimum wage and, instead, proposed a one dollar increase to phase in over three years. Franchise owner Shub Hegde, who was part of a delegation of local Dunkin’ Donuts franchisees that met with advisors to the Governor in January, says this is a much better outcome for small business owners.

“We are still concerned over a proposed cost of living adjustment (COLA) tied to the minimum wage,” he said. “But we are happy with the Governor’s veto. I would rather the legislature consider a gradual increase, say, of .25 yearly,” says Hegde, “but a one time increase of that kind of number, I’ll end up losing a lot.” In a business where minimum wage is the norm, this kind of change is one all franchise owners have to pay attention to.

One aspect of the new tax laws that hasn’t gotten as much press is the impact on the estate tax. At first glance, this may not seem as important as how you fill out your tax returns, but in the long run, it could have a sizeable impact on how you do your estate planning. Particularly if you own several stores.

It’s never pleasant to think about what will happen to your assets once you die, but if you own multiple shops, it’s worth your while to do some planning.

Otherwise, everything you’ve worked for can get swallowed up in red tape instead of going to your heirs. First, a little background: in 2001, President George W. Bush enacted legislation to change the estate tax laws. Over the past twelve years, the federal cap on the amount that could pass tax-free to heirs has fluctuated from $675,000 up to $5 million in 2010. The uncertainty around how that number might change in 2012 caused some people to rush to make tax-free gifts before the new year began.

All that has changed, with a permanent estate tax fix beginning in 2013: every individual now gets an estate tax exemption of $5.25 million per person, or a total of $10.5 million per married couple.

Here’s the deal: it used to be, if you died, your heirs could inherit up to $5.125 million before having to pay a federal tax on the money. If you owned several Dunkin’ Donuts franchises, your estate could easily be worth more than that, meaning your heirs would now be paying taxes on money you’ve already paid taxes on, through your years of earning profits and running a business.

Now, with the new, permanent limit of $10.5 million per married couple, you have a much bigger cushion of how much you can leave to your children without needing to be concerned about the IRS wanting their share. You also can be fairly certain about this amount going forward, making estate planning that much less worrisome. Of course, the new law also increases the highest tax rate, so any amount over the $10.5 million will now be taxed at the higher rate of 40%, versus 35% last year. “That’s great news.” Seth Ellis is an estate planning attorney with a number of Dunkin’ Donuts franchise owners among his clients; he sees this new limit affecting, and ultimately protecting, almost every owner. “It allows them to transfer real estate and assets to family, etc., without worry about an IRS audit,” says Ellis. “That’s great news.” Ellis feels that this legislation will give franchise owners the incentive to take action and make future plans for their assets.

“By creating trusts for the benefit of their spouse and children, they can lock in their money and allow appreciation going forward,” he says. “They can have their cake and eat it, too.”

Or their donut, as the case may be.