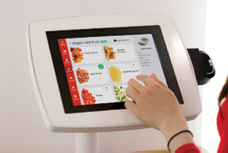 Whether it’s using self-check out at major department and grocery stores or forgoing the cashier to order from a digital menu, today’s consumers have come to accept – and even prefer – interacting with automated features as they purchase goods and services.

“[Automation is] a positive direction for the QSR industry,” says Erik Thoresen, principal at Technomic, a foodservice research and analysis company. “It has always been a part of the innovation process of QSRs, which have always looked for ways to integrate digital tools and interfaces.”

While automation brings many benefits to both the customer and the franchise owner, technological advances always introduce new questions and challenges. Just how much reach will automation have in the QSR landscape, and how will it impact the labor force?

Tomorrow’s generation of consumers may seldom interact with a human to order food. Instead, we are seeing how a completely digital interaction – either on a device at home, or via an in-store kiosk – is becoming more prevalent with each day and could soon be the norm.

Dedicated mobile apps have enabled a major boost in on-the-go ordering throughout the industry. Customers quickly adapted to the convenience of reaching for their phone to place an order, or to easily re-order a favorite item. Papa Gino’s and Domino’s were among the first to push the concept of mobile ordering, with both brands advancing their online ordering capabilities in the mid-90s. At the end of 2016, Domino’s reported that 60 percent of its sales originated online.

Over the past several years, dedicated apps quickly became widespread: Dunkin’ Donuts released its mobile app in 2012, and Panera, Chipotle, and Subway all have added online apps.

And, even though mobile ordering has been well received, Thoresen expects it to become even easier. 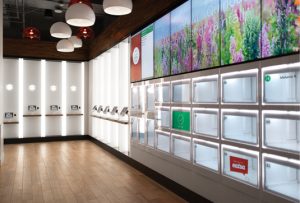 “Dedicated apps [may become] less relevant, with the technology being replicated on a web site. That’s easier [for the customer] than having to download an app to place your order. We have the technology to do this, it’s just a matter of adoption,” he says.

In-store ordering is also becoming less dependent upon a customer-employee interaction. Kiosks placed in stores permit customers to enter and pay for their order via touch-screen devices. According to a study from the POS software firm Toast, 65 percent of consumers will use a kiosk when one is available, with 55 percent saying they’ll use it sometimes, and 10 percent saying they’ll use it every time.

Already popular in Europe and Canada, kiosks are making their way into the domestic QSR industry, with a successful presence at major brands like McDonald’s, Wendy’s and Panera. According to Wendy’s Chief Information Officer David Trimm, customers and franchisees have taken a liking to their kiosks.

“You will see customers deliberately going to those kiosks directly, bypassing lines,” Trimm told The Los Angeles Times. “Some customers clearly prefer to use the kiosks.”

A look to the future

Expediting the ordering process isn’t the only way technology is changing the industry; automating food prep or delivery has been a longtime dream of those in the business.

As early as1964, McDonald’s executives envisioned automating the burger prep process. At the time, they enlisted the American Machine & Foundry Company (AMF), which created a series of connected machines boasting the ability to automate 16 different menu items. While that technology did not become widespread and was eventually abandoned, the concept of automated food delivery remains strong.

More recently, Domino’s – a brand dependent upon its ability to deliver fresh, hot pizzas in a timely fashion – has been creating a delivery robot. Domino’s Robotic Unit, fondly known as DRU, is a four-wheeled, temperature controlled delivery vehicle that uses sensors and a GPS to embark on short-range, sidewalk-accessible deliveries. Under development in Australia, DRU is still being tweaked to withstand potential issues, such as vandalism or theft.

At the extreme end of the futuristic spectrum is Eatsa, a California fast-casual restaurant that was named 2016 Tech Accelerator of the Year by Restaurant Business magazine. Eatsa, which opened in 2015, automates all its customer interactions. Patrons choose quinoa-based meals on a kiosk, watch for their name to appear on a screen, then retrieve their meal through a labeled cubby.

Other innovations in place or under exploration include fully automated coffee bars and baristas, drones to assist with home delivery, and automated burger flippers.

Why not take the leap?

As every franchisee knows, time and efficiency are things of value, each of which can be improved by automation. But while digital equipment and ordering have been successfully woven into many operations, Thoresen says he doesn’t foresee a major futuristic jump just yet.

“There’s a lot of buzz around robots these days, but I don’t expect to see true robots in the front of the house anytime soon,” he says, citing barriers such as prohibitive costs and versatility.

Kiosks are not cheap. In his interview with the LA Times article, Trimm said Wendy’s purchased three self-ordering machines for $15,000, assuming its costs would be recouped in less than two years.

Thoresen notes one concern of franchise operators may be the acceleration of change. “Franchisees may be hesitant to purchase, fearing something better may come out next year.” One example might be kiosks with operating systems that can be upgraded, so entire machines don’t have to be replaced.

Versatility is another potential roadblock, and something where human workers have an edge. “The more general-purpose a robot can become, the higher utility it has and can contribute more to the operation,” Thoresen says, using the example of chopping vegetables to make his point. He notes that chopping is a task a worker may perform for only a small portion of his shift, before he moves on to other tasks, but a machine that chops vegetables may not be able to do any other tasks.

Finally there’s the human element, which he says can never be replaced by a machine. “There’s an element of hospitality to going out for food – you don’t want to take this away completely, but complement it.”

The impact on staffing

In an industry with high staffing needs, automation sounds like a great idea – particularly in regions where the employers are now forced to pay a minimum wage as high as $15 an hour – but early results from QSR chains do not show automation reducing labor costs.

Panera, which first introduced a kiosk in 2012 at one of their busiest locations in Boston, Mass., now has approximately 400 kiosks in place at various locations. Panera has reported that restaurants with kiosks are spending more on labor than stores without them, because automation is increasing the volume of online ordering, which requires more employees to keep up with orders.

Chipotle has reported a similar outcome since it implemented its online app. Chipotle operators, rather than decreasing staff, are running two lines to keep up with online orders. Plus, operators have learned they need employees on the floor to assist with the proper use of a kiosk or answer questions at the point of ordering.

Even as kiosks and online ordering apps give customers an efficient, automated ordering experience, the data that is collected through their purchases can help create a better overall customer experience. Technology captures all sorts of user data, which operators and brands can analyze to make quick service restaurants more responsive to the consumers’ needs.

“You always want to use your customer data to get to know your customers, and to make the customer’s experience better,” says Thoresen. “I expect the industry will start to see more uses of creative ways that technology can support this effort.”

Technology is already helping customers determine where they want to go for a cup of coffee, sandwich or snack. The National Restaurant Association’s 2015 Restaurant Industry Forecast, found more than 40 percent of millennials, and a third of all adults, rated the availability of technological options an important factor in choosing a restaurant. For Dunkin’ Donuts franchise owners, online ordering is already a reality and future automation is right around the corner. If the experience of other chains is any indication, automation will need to be tested and evaluated before any direct benefits to the franchisee’s labor costs can be considered.