By Cheryl AlkonPublished May 17, 2016Category Features 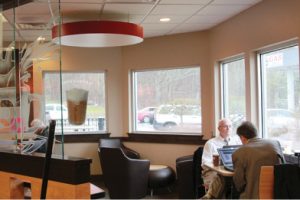 With Wi-Fi, people can sit in the store in the afternoons and have meetings on their laptops, which is a different feeling than how it was five years ago when you just had people running in and out.

Ken Blum, who owns SMB Donuts and operates 20 Dunkin’ Donuts franchises in the suburbs of Cleveland, Ohio, found one of his stores drowning in a donut overrun one day. To help them move before they went stale, he used the store’s digital outdoor sign to get them sold quickly.

“We had installed a Watchfire sign in 2008 in our Cuyahoga Falls, Ohio shop and right away we had success with it,” he says. “If we had too many donuts, we could do a spontaneous, ‘All donuts 50 cents sale, 4:00 p.m. to close’ sale advertised on the outdoor sign.”

That day, they sold out within an hour.

It’s just one example of how technology is evolving to help Dunkin’ Donuts franchises improve operations and stay relevant in an intensely competitive QSR marketplace. In this issue of Independent Joe, we examine a handful of technological advances in various fields all critical to a franchisee’s success.

Today’s digitized signs, similar to digital billboards, can be programmed by franchise owners to advertise specials, sales, and other notices to people driving by. “Instead of putting plastic changeable letters on letter boards, you have this option,” says David Watson, Watchfire’s Director of Corporate Programs. Franchisees can communicate messages such as sales on breakfast foods, and the sign can automatically change to advertise items at lunch, after school, and late night.

With such signs, “you’re reaching everybody and giving them an opportunity to pay attention to a sign, and to give messages that are most likely to promote at a certain time of day,” says Watson. The signs have software that can be programmed and set it years in advance if need be. “You can set it and forget it.”

Blum, the Ohio franchisee, says the signs have given his stores a tremendous boost because the technology gives him more control of what he is saying to his customers. He now has digitized signs in 14 of his 20 shops.

“We have 25,000 cars driving by every day seeing our advertising,” he says. “When we bought the first sign, it was about $15,000 with a five-year warranty. It was $3,000 a year, and that was about what it cost us to do a direct mail campaign. For the cost of one direct mailing, we had 365 days of advertising. We’ve been hooked ever since.

“Unfortunately, some municipalities do not allow them,” and some that do impose other restrictions, Blum says. “Most towns don’t want to have a flashy ‘Vegas’ sign. In some places, we can only change our messages a certain amount—maybe three times a day. In other towns, we have no restrictions.”

And, in every case, Blum says, the signs have helped to improve sales.

“When you think about the investment you make in your business, this is such a powerful tool to drive sales.”

A key change in sign technology is the move from fluorescent bulbs to LED bulbs, which help franchisees save money and energy, according to Bill Gavigan, Sr., of New Bedford, Mass. based Poyant Signs.

“We do a lot of retrofits, where we go in and service a Dunkin’ Donuts location and all its outside lighting. We go in and do an energy audit and, in most cases, we contract the servicing electric company for rebates.” And Gavigan says in most cases the local electricity provider will cover half the cost of switching to longer lasting, more efficient LED bulbs from old-style fluorescent bulbs.

“Typical signs need to be serviced every one and a half to two years with LEDs, and draw roughly 20-25 percent of the power a fluorescent bulb would draw, so there’s big savings there,” says Gavigan. “With LEDs, the signs should be able to go 8-10 years, and that’s the rotation for remodels.

Nish Parekh knows a lot about the back office piece of running a quick service restaurant. He is not only a Dunkin’ Donuts franchise owner, he is also a principal of Neovision, a Cranbury, New Jersey-based tax and accounting services firm. Franchisees representing over 100 quick service restaurants, including Dunkin’ Donuts, use Neovision for their accounting, bookkeeping, payroll and tax returns.

We handle all their numbers and financial reporting while they focus on business in the front of the house,” says Parekh. “We can take care of everything from bill payment to check writing to bank reconciliation to reporting a franchise’s financials to the franchisor to remain in compliance with the franchisor requirements he says. “There are no limitations.”

Through the years, Parekh has seen systems change where franchises used Point of Sale (POS) systems and owners had to email, fax, or send their end-of-the-day or end-of-the-week reports by snail mail to Neovision’s offices. Today, advances in information technology allow the company’s computer to automatically interface with a franchise’s Radiant/BlueCube system, as well as the DCP portal and various central kitchens. As a result, Neovision can download reports directly from the portals, reducing any transposition errors so often associated with manual data entry and saving valuable time. “From the franchisee’s perspective, they don’t have to do anything more from their end,” says Parekh.

Some franchise owners “still want to do things the old way, but we want to help them realize we can help them do the same thing with less input,” says Parekh. “As they see the value, they are coming around.”

Advances in information technology throughout the accounting field help busy franchise owners stay ahead of the curve, and better manage their stores notes Robert Costello, of the Adrian A. Gaspar & Company, which provides small business accounting and tax services for Dunkin’ Donuts franchise owners. He says they “can pay their bills, and be linked to our general ledger system, access histories, and take sales and payroll system information from Radiant to another software we’ve helped develop, and download it to the system.” Costello notes many of their clients – whether in New England states, New York, New Jersey, Pennsylvania, Wisconsin or Florida – opt for the “soup-to-nuts” service.

But, even in this day of technical advancement, Costello says some franchisees still prefer a low-tech approach to their tax and accounting. “Although we prefer all clients use our computerized system, we can accommodate all our clients.”

Perhaps the most important technological breakthrough for Dunkin’ customers is how they pay for their beverages and snacks. “Today, the big movement is paying for everything on your phone,” says Neal Faulkner, who operates 26 Dunkin’ franchises in Massachusetts and Rhode Island and is co-chair of the National DCP’s Information Technology (IT) committee. “We are probably seeing up to 15 to 20 percent of all transactions using the phone. That’s up from maybe zero to two percent just two years ago. And it’s absolutely going to grow.”

Since its launch in 2012, Dunkin’s Mobile App has been downloaded more than 16 million times enabling customers to securely connect their credit or debit to their smartphones for instant payment and access to DD Perks Rewards, which boasts over 4.3 million members.

Faulkner, also points out wireless technology is improving the customer experience at every Dunkin’ Donuts restaurant “With Wi-Fi, people can sit in the store in the afternoons and have meetings on their laptops, which is a different feeling than how it was five years ago when you just had people running in and out. We encourage it, because it keeps people in the afternoons when in our business things slow down. It’s a benefit for us, absolutely.” 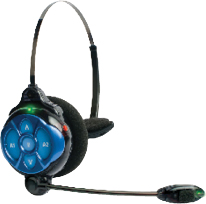 Angela Bechard, of Manchester, NH-based New England Drive-Thru Communications explains digital technology improves the sound quality by removing the background noise. “Being able to hear the customer clearly the first time saves an enormous amount of time at the drive-thru, and our timing systems also provide a valuable tool for the Dunkin’ Donuts owners to track the whole drive-thru experience for the customer.”

There’s no question, advanced technology in signage, accounting, point-of-sale transactions and communications have changed the way franchisees do business, for the better. But, with the improvements also come some learning curves.

“Technology is a two-headed coin,” says Faulkner. “On one hand, it gives you great information about how you’re selling. On the other, it takes longer to ring up a sale. It can be confusing for training versus the simplicity of the old style. But honestly, none of us would ever go back.”