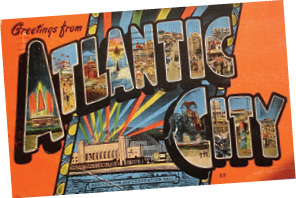 Greetings from Atlantic City!” It’s said that one of the first picture postcards in America was a color view of this fabled seaside resort. In those days, sending a missive from Atlantic City was an enviable coup that boasted of cavorting in the sand, strolling the magnificent boardwalk, and even watching diving horses or human cannonballs. In its heyday in the 19th century, Atlantic City truly lived up to its moniker as, “America’s Favorite Playground.”

Recently, the golden image of Atlantic City has been tarnished by reports of its demise post-Sandy. But contrary to what some news outlets have reported, Atlantic City is rebounding and better than ever, said Jeffrey Vasser, executive director of the Atlantic City Convention and Visitors Authority (CVA). “Today’s Atlantic City is hipper, younger and hopping with non-stop action. No matter what you want to do – water sports, ecotourism, nightclubs, shopping or entertainment – you will find it in Atlantic City.” 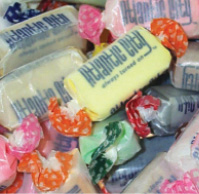 Atlantic City is often called the “Salt Water Taffy Capital of the World.” The treat was invented here in 1880. The Website Daily Meal.com rated Atlantic City number two on its recent list of 24 best boardwalks for food in the U.S. 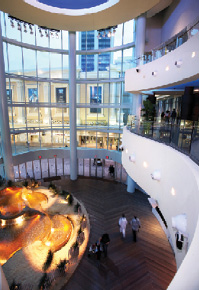 And as further proof of Atlantic City’s current vitality, here she is, after an eight-year absence, Atlantic City has once again been crowned the host of the Miss America pageant. Come September, the celebrated extravaganza will return to the place it was first launched in 1921.

Boardwalk Hall was the site of the 1964 Democratic National Convention, at which Lyndon B. Johnson accepted the party’s nomination.

Built between 1929 and 1932, the arched roof of Boardwalk Hall was modeled after the clear-span train sheds of Europe and Philadelphia’s Reading Terminal.

This is not the only “first” for Atlantic City: it also boosts the first boardwalk constructed in the U.S. Erected in 1870 so visitors would not track beach sand into the grand hotels that were springing up, today’s edition of the Boardwalk is roughly four miles long, offering a myriad of eating and entertainment options. According to local legend, salt-water taffy originated on the Boardwalk in the 1880s after seawater flooded a candy store. Atlantic City also reportedly was the inspiration for game inventor Charles Darrow’s “Monopoly” game because of his fondness for childhood vacations spent in the beachside city. Anyone want to trade Park Place for $500?

Atlantic City continues to draw top stars. Beyonce, Jerry Seinfeld and Diana Ross are just three of the superstars performing there this summer. And those gorgeous flappers and heady jazz music you’ve seen in “Boardwalk Empire?” The national heroes of stage and film all considered Atlantic City a showbiz mecca in the 1920s and 30s, from Spencer Tracy and Clark Gable to Humphrey Bogart and the Marx Brothers. And a handful of decades later, famous celebrities such as Marilyn Monroe and Frank Sinatra walked the Boardwalk, which also hosted the Beatles who noshed on submarine sandwiches on the boards.

Atlantic City continues to be listed by travel experts as a top authentic American experience that speaks to the “real U.S.” It also receives accolades for the unexpected: best art projects (outdoor exhibit Artlantic); best beachside paths and boardwalks; and top place for marquee boxing, thanks to famous fighters such as Mike Tyson who called Atlantic City home over the years. And of course, it’s no luck of the draw that Atlantic City is a top casino destination, whether it’s playing slots, poker, blackjack, roulette, or other non-stop gaming thrills.

Stand on the Boardwalk, and breathe in the fresh salty ocean air. Beyond the surf, you might hear the echoes of long-gone vaudeville acts, hear the notes of a current big band playing on the Steel Pier, and catch a glimpse of the famous rolling chairs on the Boardwalk. The National Historic landmark and oh-so-tacky and fun Lucy the Elephant (a six-story, elephant shaped building) are steps away. This is the glorious Atlantic City – home to the 2013 DDIFO National Conference – and a place the executive director of the CVA is betting visitors will love. And this is a bet he’s sure to win.