The Canadian doughnut invasion has begun. 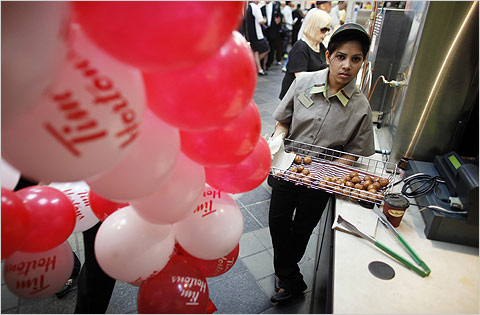 Aysha Siddeqa, a former Dunkin Donuts employee, now on her first day at Tim Hortons, hands out free Timbits on Monday as workers remove the decorations from a ribbon-cutting ceremony at the opening of a Tim Hortons restaurant in a former Dunkin’ Donuts location in Penn Station. Damon Winter / The New York Times

Libby Nelson writes in the New York Times that over the weekend, 12 Dunkin’ Donuts restaurants in Manhattan and Brooklyn underwent a transformation, emerging Monday morning as the first New York City locations of Tim Hortons, a Canadian chain that sells coffee and baked goods. The Riese Organization, which owns the stores, recently ended its affiliation with Dunkin’ Donuts, hoping that another franchise would produce better profits.

“As the boss, I knew I wanted to replace a doughnut with a doughnut,” Dennis Riese, the company’s chief executive, said before a ceremony inside Penn Station on Monday morning at the opening of Tim Hortons.` complained to the clerk as she left, a small iced coffee in hand.

The ribbon-cutting included two former New York Rangers players, Rod Gilbert and Glenn Anderson. Tim Horton, the founder of the doughnut chain, played for the Rangers from 1969 to 1971. City Councilman David Weprin, who was also on hand, said the chain’s arrival “shows New York City is on the move, that we’re a desirable market,” Mr. Weprin said.

Customers at the Penn Station location and at another new Tim Hortons on 34th Street near Seventh Avenue had more varied reactions. Some had tried the chain’s offerings in Canada and were lining up for more. Others had read about the changeover and were eager to give the new chain a try, especially with a free cup of coffee thrown in for good measure. But a few were befuddled when they showed up to what they thought was a Dunkin’ Donuts, only to find it gone, the pink-and-orange decor supplanted by a more subdued dark red.

“I had no idea,” said Danielle Gerard of Queens, who works near the new Tim Hortons on 34th Street. “I have no choice, because I hate Starbucks and once I go up to my building I’m not coming back down. They better not do this in Queens or Long Island.”

Waiting in line at Pennsylvania Station, Bari Siegel, of Fort Washington, said she was excited about the change.

“I’m sick of Dunkin’ — I think their coffee has been bitter,” Ms. Siegel said. But she ended up pocketing the coupon for free coffee to use later in the day. She watched a friend, Susie Goldman, also of Fort Washington, taste-test the coffee.

“I really do like Dunkin’ Donuts,” Ms. Goldman said before taking a sip. Her reaction afterward? “It’s strong,” she said. “I’m in. I think it’ll grow on me.”

Regina Elkaim, standing in line at the Tim Hortons on 34th Street, said she had never tried the chain’s coffee or doughnuts, but was optimistic.

“I am a Dunkin’ Donuts fan, but I saw it on TV and I’ve heard good things,” Ms. Elkaim said.

Tim Hortons has more than 3,400 locations, including more than 500 in the United States, but until Monday morning the closest stores to New York City were in Meriden, Conn.

Most customers on Monday seemed to prefer coffee over doughnuts, with a few ordering bagels, sandwiches or other baked goods. As they filed out of the 34th Street store, reactions were mixed.

“Dunkin’ Donuts used to have larger cups,” Ms. Gerard complained to the clerk as she left, a small iced coffee in hand.