By Michael HobanPublished May 1, 2020Category Features 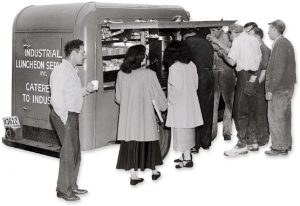 In what may best be described as a case of synchronicity, the year that Dunkin’ founder William Rosenberg opened up his first Open Kettle restaurant, a burger stand 3,000 miles away became the first fast food location to institute drive-thru business. That was 1948, and while these two pioneering concepts would one day prove to be a match made in QSR heaven – as complementary as a regular coffee and an old-fashioned donut – it would be decades before drive-thrus would become fixtures at Rosenberg’s coffee and donut shops.

As is the case with most QSR’s, the Dunkin’ drive-thru strategy is such an integral component of the brand’s success that it’s difficult to imagine one without the other. Not only do 70 percent of Dunkin’ shops have drive-thrus, “restaurants with drive-thrus bring in, at a minimum, two times that of the average sales volume than those that don’t,” according to DDIFO restaurant analyst John Gordon, founder and principal of Pacific Management Consulting Group.

So how did they finally come together? 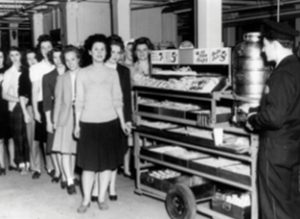 The history of the drive-thru is often associated with the go-go car culture of Southern California in the 1950s, but a diner in the Midwest is widely credited with offering America’s first drive-up, take-out fast food service. Red’s Giant Hamburg, a fixture along Route 66 in Springfield, Missouri and owned by a redhead named Sheldon Chaney, began drive-thru service in 1947.

It was 1950, however, when the aptly-named Los Angeles burger stand In-N-Out ushered in the age of the drive-thru with the introduction of the two-way speaker box, which owner Harry Snyder developed in his garage. In-N-Out had no inside seating, only outside parking where one could enjoy a tasty burger from the comfort of the front seat of his Buick Riviera or Ford Club Coupe. Jack in the Box, another southern California fast food concept, followed In-N-Out’s lead and opened as a drive-thru franchise concept. It wouldn’t be long until other fast food operations began adding drive-thrus. But, perhaps no brand is as closely associated with the popularity of the drive-thru as McDonald’s. In 1975 McDonald’s opened its first drive-thru as a courtesy to soldiers from the Fort Huachuca, Arizona military base who weren’t allowed to get out their cars while wearing fatigues.

For Bill Rosenberg, who owned the popular regional burger chain Howdy Beef’n’ Burger, drive-thrus were not yet part of the business.

Franchise owner John Motta recalls a pamphlet Dunkin’ Donuts produced around 1980 that encouraged franchisees to build drive-thrus at their restaurants. The publication stuck with him because the image on its cover featured his Merrimack, NH store. At the time, Motta says, he was told that Merrimack was just the second drive-thru in the system. A source at Dunkin’ Brands confirmed that the first drive-thru was at a Dunkin’ Donuts in Edison, NJ. About 400 miles to the west, in Youngstown, Ohio, a future Dunkin’ franchise owner was already sold on drive-thru business. Hall of Fame franchisee Joe White started flying the Mister Donut flag in 1978, Five years later he moved that Mister Donut from a retail plaza to a stand-alone location which he remodeled to add a drive-thru. “At that point in time, I was watching how McDonald’s was going along and could see how successful these drive-thrus were,” says White. “So I just told myself, ‘we’re going to put in some kind of drive-thru,’” but he wanted it to be simpler than what McDonald’s featured. 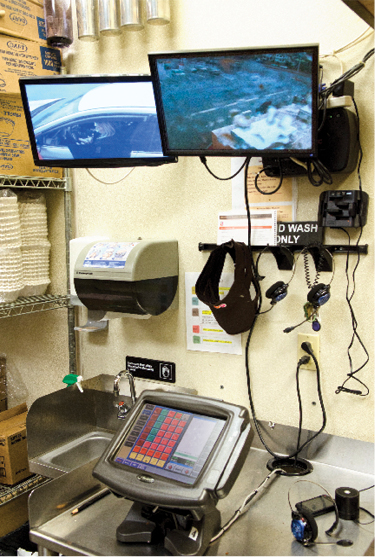 White liked the way gas station attendants were alerted when a car rolled up to the pump—a pressurized rubber hose laid across the lane would ring a bell when a customer ran over it. White installed the hose at his shop and when the bell rang, the server would go to the window and treat it like it a counter experience without the customer ever leaving the car.

“Over time, 40 to 50 percent of our business was coming through the drive-thru. Even though it was cumbersome and slow, it was still convenient for people going to work,” recalls White. “And because of the drive-thru, my volume was reaching the same as stores in the big metropolitan areas.”

“The initial innovation proved successful, but White knew the drive-thru experience could be even better, so he tinkered and innovated. The rubber hose would eventually be replaced by magnetic loops, and he also added an intercom system, similar to the two-way speaker box at In-N-Out, but better. White added a second speaker at the back of the store so the server at the window and the person who was building the order could both hear. He later consulted with a technician who installed systems at McDonald’s, and implemented a system that enabled them to stack orders and employed video display monitors, creating an early version of what Dunkin’ uses today. That sped up delivery times from five minutes to approximately 90 seconds and improved accuracy. “This all transitioned over time,” says White. “It wasn’t like, bang, bang, bang, but it just kept getting more and more sophisticated.”

In 1990, Dunkin’ acquired Mister Donut, and White made the conversion. Because he had one of the only drive-thrus in the state of Ohio, Dunkin’ came knocking to learn more. “They started questioning why I was doing such a volume in sales as opposed to stores in the metropolitan areas,” White remembers. “And they started looking at things. Of course back then, it was a different organization than it is today.”

Initially, Dunkin’ insisted White convert to Omron cash registers, which were incompatible with his drive-thru system, but later relented, writing an exception into his franchise agreement. “They allowed me to continue on because, if they made me change my system, I wasn’t going to convert because there was so much business there,” says White.

He is thankful he was able to keep his original system through the merger. Eventually he was able to grow his network to 29 stores in Ohio and western Pennsylvania. They all have drive-thrus, which account for more than 70 percent of his sales volume. “We’re spread out here, so there’s not nearly enough pedestrian traffic. In Ohio, you’re working in small towns outside of high-traffic areas, so with the drive-thrus we’ve done very, very well.” 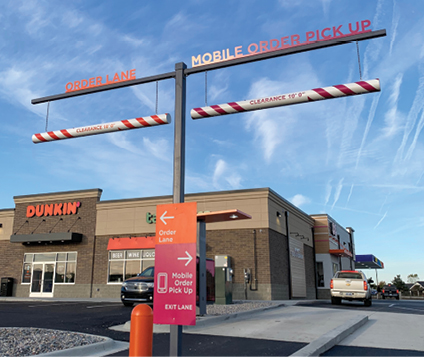 Eventually, Dunkin’ would migrate all its shops to a different point-of-sale system that was designed to integrate with drive-thru systems. As Gordon points out, Dunkin’ was not the only chain that was slow to adapt. “It took the QSR industry five to 10 years to react to the possibilities of drive-thru.” While drive-thrus were profitable, chains recognized they needed to protect the inside of the house. “You didn’t want to have this big restaurant with all these seats just sitting there empty,” he says.

It is also interesting to remember that drive-thrus didn’t come to the big cities of the Northeast for some time, according to Gordon, largely because it was hard to get permits in large urban areas. But once they started to proliferate in the mid-1980s, drive-thrus became an increasingly vital part of a QSR’s sales strategy. Chains began designing restaurants to accommodate drive-thru business and new technology allowed for a more enjoyable customer experience.

“[Drive-thrus] really changed the technology suite in restaurants in that it caused the continued development of additional restaurant point-of-sale (POS) technology, particularly systems between the front of the house and the back of the house and how the orders could be communicated and processed,” Gordon says.

Today, Dunkin’ is widely recognized as a leader in drive-thru service. In QSR Magazine’s 2019 Drive-Thru Study, which ranked the largest fast food chains in the U.S., Dunkin’ achieved the top spot, with the fastest drive-thrus in America. Dunkin’ does it best because franchisees conduct rigorous training so employees know exactly how to keep the line moving. The company encourages customers to fill out surveys ranking their service. If a shop’s drive-thru numbers are bad, corporate finds out and talks with the franchisee to institute improvements.

Drive-thru business continues to evolve. When Dunkin’ launched its Next-Gen stores, it became the industry’s first to include a dedicated mobile order drive-thru lane, so customers that order ahead with their mobile app can drive right up to the window and get their order.

As America shut down in response to the coronavirus pandemic, Dunkin’ shops with drive-thrus saw nearly 95 percent of their sales come through the window. It’s a testament to the genius of the early drive-thru pioneers, who recognized the value proposition of delivering food to the front seat anytime the customer wants it, and another sign that while America Runs on Dunkin’, QSRs run on drive-thru.