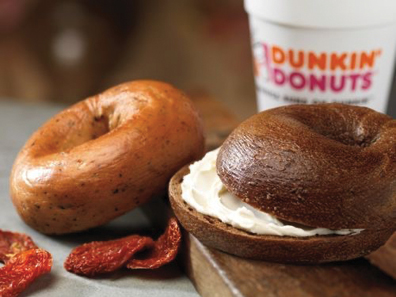 But after so many years and so many donuts, something savory happened. Donuts were being vilified as an unhealthy choice for an increasingly health-conscious nation during the mid-1990s. Bagels, on the other hand, were coming into their own. While not necessarily healthier (or lower in calories) than a donut, the bagel had a different image but was still the perfect complement to a morning cup of coffee. Sensing the opportunity. Dunkin’ leapt into the bagel fray in 1996. Having found the right way to tap into customer’s taste buds, the brand began selling bagels by the millions.

“We were selling a lot of donuts when Dunkin’ introduced bagels,” says Mark Dubinsky, a former franchisee whose family owned 27 Dunkin’ restaurants in Massachusetts, New Hampshire and Vermont. “But it was hard to make money just on donuts. We needed something else to bring the customers in.”

It turns out, bagels were that something else and, ever since their introduction, Dunkin’s bagel sales remained strong.

When Bagels Took Over the World

In the early 1990s, several different food brands began experimenting with bagels. For example, when sales were in a slump, Burger King would introduce bagel sandwiches as a temporary fix. Even the frozen food dessert leader Sara Lee experimented with pivoting from baking frozen treats to baking fresh bagels and shipping them daily to grocery stores throughout California. But it was restaurants like Bruegger’s Bagels – founded in Troy, NY in 1983, and Einstein Bros. Bagels, created by the Boston Chicken chain in 1995 – that were leading the bagel brigade. With its strength in the Northeast and appetite for new menu offerings, Dunkin’ was well-positioned for a bagel assault.

Initially, the brand initiated a bagel campaign and promotion in New England and New York, using frozen bagels from the Lender’s company, which were warmed and toasted in the store. They backed up the launch with a limited time offer of a medium coffee and bagel with cream cheese for just 99 cents.

“This promotion performed much better than expected, blowing the doors open to a more formal introduction of the bagel in all of Dunkin’s stores,” says Dubinsky. At the time, Dunkin’ wanted each location to emulate the bagel stores found in New York City. It was a very big deal, according to Dubinsky.

“It was a big shift in our model because corporate wanted the stores to keep bagels as warm and fresh as they could throughout the day, just as they do in bagels stores in NYC” he says. “As a result, participating Dunkin’ locations had to do some significant renovations to make room for new equipment.” 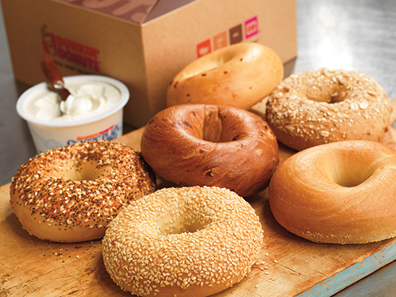 Many believe bagels arrived in New York City in the late 19th century, along with an influx of Eastern European Jews. They began producing bagels in small, privately-owned bakeries where they hand-rolled, boiled and baked the breaded product. By 1900, there were 70 bagel bakeries sprinkled among the tenement buildings and small retailers of New York’s Lower East Side.

As the story goes, when Jews began moving out of the ghetto and into different parts of the New York metropolitan area, they brought their bagel recipes with them. In 1930, a union of bagel bakers was established – Bagel Bakers Local 338 – which monopolized bagel production in the city. In fact, just eight years after its formation, the union had contracts with 34 of the largest 36 bagel bakeries in New York City and New Jersey. For a while, the region’s union bakers were producing 250,000 bagels per day. Soon, the popularity of the bagel extended beyond the Big Apple and the Northeast and, by the 1960s, people in all corners of the country were enjoying a bagel with cream cheese, butter, peanut butter and other local combos.

As so often happened, modernization crept in, allowing the bagel bakers to become more efficient. Ovens enabled them to have hot bagels on hand throughout the day, resulting in these bakers being able to sell directly to the customer. The union didn’t like this.

Other technology and automation also contributed to the erosion of union clout. The creation of a frozen bagel that could be quickly warmed and enjoyed changed the entire landscape. First in the frozen category was California’s Thompson’s Bagels in the late 1950s, followed by Lenders’, baked in New Haven, Conn. Soon, machines were replacing bagel bakers and, by the early 1970s, the bagel bakers union was kaput. Bagels were big business and, even without a union, New York City remained home to some of the best bagels in the world. It was that model which Dunkin’ tried to follow as it got serious about bagels.

“If a New York bagel shop did it, Dunkin’ wanted to do it,” Dubinsky recalls. “That meant each franchisee needed to train each employee how to shmear (spread) cream cheese on each bagel properly. Dunkin’ created a very specific shmearing process that had to be followed exactly.”

Bagels are a Big Deal

For Dunkin’ Donuts franchisees, the bagel program was an expensive endeavor.

The bagels were delivered to each location frozen and uncooked. Initially they came in 12 flavors including, plain, everything, sesame, onion, poppyseed, egg, pumpernickel and more. Dunkin’ actually sold blueberry and pumpkin bagels at one time, too. Today, six varieties remain standard on the Dunkin’ menu.

Dunkin’ franchisees already knew the power of advertising and marketing to sell their products, so when it came time to launch the Dunkin’ bagel, the brand put a lot of capital behind the campaign. Fred the Baker, who was already well known for waking in the wee hours of the morning because it was “time to make the donuts,” appeared in the first ads introducing Dunkin’s bagels to the public.

As part of the campaign, Fred visited New York City, seeking opinions from finicky bagel noshers, including NYPD officers, taxi drivers and even NYC Mayor Ed Koch, who in one commercial demonstrated the authentic way to shmear cream cheese on the bagel.

The advertising paid off. The public’s response was overwhelmingly positive and new customers came to Dunkin’ to try a bagel and coffee. Soon, it was a staple of the morning and bagels had replaced donuts as a tasty (and round) breakfast on the go. Within a year after introducing bagels, Dunkin’ was the country’s No. 1 bagel seller. To this day, Dunkin’ remains a top purveyor of bagels in the U.S.

A lot has changed since the early days of bagels at Dunkin’. The vast majority of Dunkin’ stores now have ovens and either make all their bagels in the stores or take a hybrid approach, where the commissary delivers a small number of bagels for the morning rush and the restaurants bake fresh bagels throughout the rest of the day.

“Introducing bagels was a great move for Dunkin’ because it gave our customers many more savory choices and actually expanded our customer base to a whole new segment of consumers that we didn’t have before. We saw a significant uptick in customer counts, which is always a great sign of a healthy, thriving business,” says Dubinsky. “Bagels are in the company’s DNA and are definitely here to stay.”