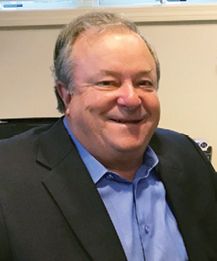 From the time he was a teenager, Carl Andrade had little doubt he would work for Dunkin’ Donuts. His two other brothers, Manny and Tony, were already established as Dunkin’ franchisees.

“It was 1975 and I worked as a baker at Tony’s shop in Holbrook, Mass. I was there a year and a half,” he remembers. ”Dunkin’ wasn’t that big back then, so when a store became available in New Hampshire, I had to go for it.”

That was 1977, Andrade was 21 and already married. He and his wife moved to Manchester and, in the 40 years since, they have built a successful business. Today he has 16 shops that his children, Lori and Kevin, help run.

He admits he was surprised when his old friend – and New Hampshire neighbor – John Motta called to inform him the DDIFO Hall of Fame committee had selected him to be honored at this years’ National Conference.

“I am happy to be recognized by my peers,” he says. “I’ve been with Dunkin’ Donuts a long time and they all know me.”

Indeed, people know Andrade as a hard-working operator who always has the interests of the franchisee community in mind. He is also known for his philanthropy.

“I want to give something back,” says Andrade. “We’re here doing business and appreciate being here. The more [you are] involved in the community, the more you learn about what’s going on.”

For four decades, Andrade has also been on top of what’s going on with Dunkin’, volunteering for many councils and committees. He served as a member of the Boston Ad Committee for over 20 years, was chair of the New Hampshire DAC and was a member of the DDIFO Roundtable for over 10 years. Of all those, he says, his work with the New Hampshire district was the most rewarding because it showed “franchisees had faith in me and my decision making for all the stores in our state.”

Andrade has seen many changes come to his adopted home-state. As textile mills and other industries closed many of the French Canadians who had migrated to New Hampshire moved away. Many of those were regular customers of Andrade’s shops. Today, he says, many customers from the late 1970s still come in to see him.

“There is this one woman who comes in and says, ‘Where’s Carl? I need my hug.’ I was always a people person and loved talking to people and meeting people,” he says.

During the years the competitive landscape has changed too, he notes.

“When I came to New Hampshire there were no other donut shops, other than Dunkin’. We were the only game in town, especially late night and overnight. On the midnight shift the stores were actually busy with people getting their coffee on the way to work,” he recalls. "We didn’t compete with convenience stores and McDonald's".

Andrade has always enjoyed having his two brothers – and other family members – in the Dunkin’ system. They’ve been there to provide moral support, staffing support and a reality check of how his shops operate in comparison to others.

“We would look and compare our sales, our percentages and our food costs to find out if we were really doing a good job.”

It was an advantage, he agrees, many franchisees didn’t have. It also didn’t hurt that his brothers were well-regarded in the business. With Carl’s induction, all three Andrade brothers are now enshrined as Hall of Fame operators. 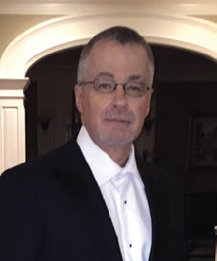 When you talk with Jim Cain, the long-time Connecticut franchisee whose network has expanded into New York City, he is quick to mention the names of people he considers the giants in the Dunkin’ Donuts system, people like John Rader, Manny Andrade and John Henderson, who helped transform a New England coffee and donut chain into a powerhouse global brand.

Cain started his career working for these men in Providence, Rhode Island and later served with them on various Dunkin’ Donuts advisory councils and committees. “Some people have that natural ability to be successful and have an impact,” says Cain, as he references the names of those he will join as members of the DDIFO Franchise Owners Hall of Fame.

“It’s an honor and a privilege to be recognized for hard work, but it means even more so when it comes from your peer group,” Cain says. “When it’s from them, it means the most.”

Cain was just 21 when he bought his first share in a Dunkin’ shop. He had a couple of years of experience under his belt and saw the chance to make a name for himself in the burgeoning Dunkin’ brand. After two years, and newly married to Mary Cain, he took a calculated risk and sold his share so he could go solo in a new market—Norwalk, Conn. “I learned at the beginning that success in this business is based on a culture of hard work. Particularly in those early years building the business, I could not have done it without my wife’s support,” he says.

In the late 1980s, as Dunkin’ was facing a hostile takeover bid, Cain joined the National Leadership Council, the precursor to the Brand Advisory Council (BAC). “I came in and worked with Henderson, John Rader, Mark Dubinsky, John Boujoukos [and others],” he remembers.

Eventually, his sons Jim Jr. and Shaun joined the business, enabling Cain to expand his footprint and devote more of his time to franchisee business. From there, he began spending more time on advisory work, ultimately devoting as much as two thirds of his work time to that side of the business.

Over the years Cain served as co-Chair of the BAC, the Restaurant Excellence Subcommittee and the New York Ad Committee. But, he says it was his work on the Marketing Steering Committee that gave him a whole new perspective.

“It changed how I look at the business,” Cain says. “It’s given me a birds-eye view of what we do. I’ve learned that marketing is the lifeline of the business.”

After 18 months on the committee, Cain was elected chairman.

“Marketing is a balancing act,” he says. “I’ve tried to instill some best business practices, while at the same time keeping mindful of its creative nature. We’ve developed a comp calendar to quantify which products are winners and which are losers. We check it on a month-by-month basis to see where shortfalls are,” he says.

These days, Cain works hard finding the right balance between Dunkin’ work and his love for the water, spending time on the boat or scuba diving. He says he keeps coming back to the advisory work in part because of what his sons say to him.

“’Keep doing it,’ they tell me. ‘You’re making it easier for all of us.’ There is a balance point, but I like what I do,” Cain says. 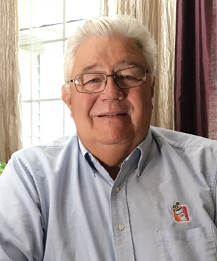 Joe White’s history with Dunkin’ Donuts is like that of few others. An Ohioan born and bred, White got into the donut business because he wanted to be his own boss. He bought a Mister Donut shop in the late 1970s and converted when Dunkin’ bought the chain in 1990. As White told Business Journal Daily in 2009, he had two choices at the time. He could either convert his stores to Dunkin’s or “die on the vine. So I decided to convert to Dunkin’,” he remarked.

Today, he admits he was fortunate Dunkin’ bought the chain so he could enter the system. He didn’t realize he would have an influential voice in the brand’s development. At the time of the Mister Donut merger, drive-thrus were still growing in popularity. White recalls how his former Mister Donut shops were already realizing the benefit of selling coffee and snacks directly into the customer’s car. “When we were Mister Donut, we were doing 45-50% percent of our business through the drive-thru,” he says. “We were outperforming stores in metro areas that didn’t have drive-thrus.” In fact, White once closed a location because it didn’t have a drive-thru.

So much so, White recalls, that he told Dunkin’ he wouldn’t convert his system to Omron. The situation created a conflict because, as White remembers, Dunkin’ was adamant that franchisees all had to use the same systems. But White wouldn’t budge.

Eventually, White kept what he had and Dunkin’ moved past Omron to find a new system that would enable franchisees to maximize the opportunities drive-thrus presented.

When he learned the Hall of Fame nominating committee selected him for induction, White says he was shocked. “It humbles me because there are so many great people in this system. I’ve learned a lot from them. I was always a listener, I wanted to find out what was going on. I would listen and soak it all in, taking away what I thought applied to us.”

At the same time, the brand was listening to White. In the 1990s, his Ohio shops were often used to test market new products and he was invited to National Leadership Council meetings so the brand could ask him what customers thought of the new products. Over the years, White also served on the brand’s Restaurant Excellence Subcommittee, the Regional Advisory Council (RAC) and the BAC. He was always happy to take part, not just because it could help him, but also because it could ultimately help other franchisees. The way he sees it, Dunkin’ owners are all in it together, regardless of where in the country they operate.

“We are only as strong as the weakest link. Anything that happens in this system, it affects all of us.”

White’s days of baking donuts and working weekends ended years ago when his son, Stewart, joined the business. Like others in this year’s Hall of Fame class, he has shifted more of his time into committee work. He was an inaugural member of the original Dunkin’ Donuts Baskin Robbins Charitable Foundation, serving two years on the board.

“I found that to be very gratifying and satisfying. I am still involved with Harvest for Hunger and sit on their board,” he says. Harvest for Hunger is one of the nonprofits that receives funding from the newly-named Joy in Childhood Foundation.

White learned long ago the importance of giving back to the community. He says that’s how people embraced him as a local business owner way back when he was Mister Donut. He says he also learned the importance of his independent franchisee association. “People don’t realize the importance of DDIFO until they need it. I’ve been around long enough to see the cycle. It’s like insurance for franchisees.” 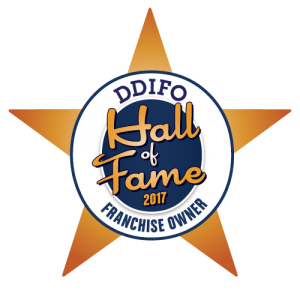 Started in 2011, the DDIFO Franchise Owners Hall of Fame honors franchisees and others who made important contributions to the Dunkin’ Donuts system. The inductees include: