Kiosks, online delivery and license plate recognition technology are three of the latest concepts being rolled out at quick service restaurants across the country. They represent groundbreaking changes in an industry that’s looking to not only maximize efficiency and manage costs, but also appeal to a tech-savvy customer base hungry for innovation. In this issue of Independent Joe, we look at how these ideas are being implemented.

As of July, 1, 2019 there were nine Dunkin’ shops across the United States that featured touchscreen kiosks to allow guests to order food and drinks on their own, without ever interacting with another person at the counter. According to Nation’s Restaurant News, kiosks are being tested in Dunkin’s tech-focused Next Generation stores in Massachusetts, New Hampshire, New Jersey and Rhode Island; in June, Dunkin’ opened its 100th California location in Santa Ana, California (see page 11).

Kiosks allow guests to customize orders and pay using Dunkin’s loyalty app. The process accrues points for future rewards and allows guests to pay via credit card or a Dunkin’ gift card. Kiosk orders move directly to the location’s point-of-sale system; pending orders are posted on a digital board so guests can see who else is waiting for an order before (or after) them. The entire sequence is meant to make the process as quick and accurate as possible.

“I think we need to have them because that’s where the industry is going,” says Victor Carvalho, who co-owns 10 Dunkin’ shops in Mass., including the company’s first Next Gen store in Quincy. “There’s a whole segment of people who will order at the kiosk and we will see that there’s nobody at the counter.”

According to Aaron Allen, the founder of the global restaurant firm Aaron Allen & Associates, Kiosk users are typically “guided through the ordering process, and using kiosks generally increases the check, margin and throughput,” or the number of customers served per hour.

Byrne says kiosk users tend to spend more than they would if they ordered at the counter, based on the kiosk’s add-on suggestions. “It has boosted the check, but restaurant owners are dealing with less traffic.” For example, a diner may visit a quick-service restaurant twice a month and typically spend $7 per visit. But Byrne points out, if that same diner uses a kiosk at one visit and pays $10, “they are not going to perceive the value in the same way and that might eliminate a visit.” Restaurant owners love the fact that the check is higher, but they all talk about struggling with traffic. 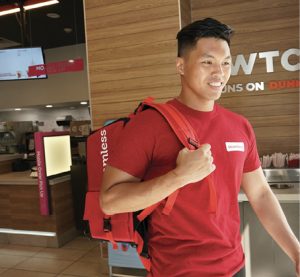 While research shows QSR operators appreciate how checks generated through kiosk orders are higher, they don’t make up for slowing guest traffic. The same issue is popping up with online ordering for delivery. “You may have to order enough to reach a minimum for delivery, and a delivery charge may apply. It can amount to a bigger check, but may inversely affect the number of times a customer will order that way,” says Byrne.

In June, Dunkin’ introduced delivery services in New York City using GrubHub/Seamless, an online food delivery program. Orders are processed through Dunkin’s Point of Sale (POS) system, and integrate real-time traffic patterns in a process called geofencing to determine which of Dunkin’s 400-plus New York City locations can deliver a customer’s order the quickest, according to Nation’s Restaurant News.

According to Allen, delivery aggregators like GrubHub “get new customers, and they are the bulk of new restaurant growth.” In its recent earnings call, McDonald’s reported delivery “continues to be a meaningful contributor to comp sales in a number of markets.” The burger brand recently expanded delivery options by adding DoorDash to its existing Uber Eats option. Dunkin’ has also indicated it will seek out other partnerships to solidify delivery in markets like Boston, Chicago and Philadelphia. “We want to make a serious push with delivery,” Dunkin’ Vice President of Digital and Loyalty Marketing Stephanie Meltzer-Paul told Yahoo Finance, indicating that DoorDash may soon provide home delivery of Baskin Robbins ice cream too.

But, as Allen points out, food delivery is not unlike travel aggregation websites. As hotels and airlines first saw when they first worked with companies like Expedia, “they realized they didn’t want to make their own capital investments, but ultimately realized that they should. Some are realizing they don’t want to rely on the aggregators.” He told us he wouldn’t be surprised to see food brands eventually develop their own delivery systems. “I predict within 36 months we will see more companies deciding to do this.” 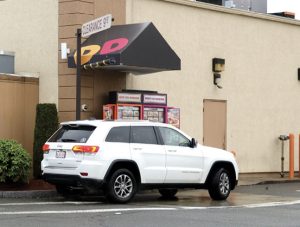 With more than 70 percent of Dunkin’ business coming through the drive-thru, license plate recognition represents a new opportunity for franchisees to better connect with their customers. As the Los Angeles Times reported, technology to check a license plate against an existing data base of customers and their preferences can help operators “link an individual car with a customer’s credit card and order history — meaning the customers could pay without pulling out their wallets or phones.” As the paper describes it, “Customers who belong to loyalty programs or use restaurants’ apps could add their license plates to their existing profiles; cameras positioned in drive-through lanes would then take photos of cars’ plates, and the analysis software would determine whether they belonged to known customers.”

The technology could allow operators to also customize the electronic menu board to better appeal to the customer in the queue.

“I think it will likely have to clear an additional hurdle,” says Byrne. “I think a lot will need to be worked out, likely in court cases, because I think this gets into an area where people are saying, ‘It’s too much like facial recognition. It’s too Big Brother.’ I think it’s something that we may [not see until] 20 years into the future.”

If there is one thing we can all be sure of, it is that technology will continue to move quickly and reshape the QSR environment—improving and defining the dining experience for guests and franchise owners. “Kiosks, online delivery and license plate recognition are three hot buttons right now, but there will be three new ones in 12 months,” Allen says. But what will those look like? “

“My thought for technology, in the next 10 years or so, will be in the back of the house, not consumer-facing, for increasing efficiency and speed,” says Byrne.