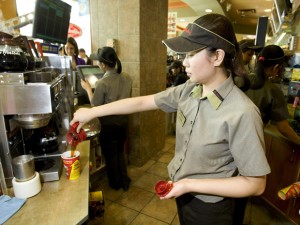 Joseph Brean reports in the National Post that Tim Hortons has won a major legal battle against franchise owners, now that a judge has tossed out a proposed $2-billion class-action lawsuit over the price of doughnuts.   Tim Hortons franchisees benefit from an iconic national brand, and with such high profits from coffee sales, they should accept lower margins on food, according to the decision by Justice George Strathy of Ontario Superior Court.

“The fact of the matter is that under the Tim Hortons system, the franchisees are given the licence to sell Tim Hortons trademarked coffee — a brand that is about as iconic as there is in Canada,” the judge wrote.   “What matters, at the end of the day, is whether the franchisee makes sufficient profit overall to justify his or her investment and to remain in the business. The suggestion by the plaintiffs that [Tim Hortons] has an obligation to price every menu item so that they can make a profit on that particular item is not supported by the contract, by the law or by common sense.”   At the heart of the case, which began in 2008, is what the judge describes as the “Always Fresh Conversion,” a shift from fresh baking in each store to a system of industrial par baking and flash freezing at a centralized plant in Brantford, Ont., followed by reheating in specially designed ovens.

To say this shift was controversial is an understatement, like saying Canadians are fond of Tim Hortons. The truth is they are patriotically loyal to it, and the switch to frozen doughnuts and muffins was seen as a major corporate risk, and it was the subject of intensive consultation with franchisees.