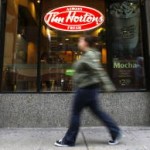 David Paddon reports at the The Globe and Mail  that Tim Hortons Inc.  will use $400-million from the sale of its half of Maidstone Bakeries to buy back some of its shares on open market, a move that may win investor favour despite some bitter-sweet news announced Wednesday.

The iconic Canadian restaurant operator, which has been making inroads into the American market, said it has decided to make a strategic retreat from the Providence, RI., and Hartford, CT., markets in the U.S. Northeast.

Tim Hortons says a total of 36 stores will be closed, all but two of them in those two cities, and the company will record a $20.9-million accounting charge to reflect the impaired value of those assets. That will be followed by an additional charge of up to $30-million that will be recorded in the fourth quarter.

The closings, which represent a small fraction of the 600-plus stores Tims has in the United States, were largely responsible for the company’s third-quarter profit falling short of analysts’ expectations.

Tims president and CEO Don Schroeder said Wednesday that the retreat from Providence and Hartford were necessary because they are among the most intensely competitive markets for quick-service restaurants.

“We believe this step removes a significant impediment to our long-term growth and development,” Mr. Shroeder said in a statement.

“These restaurants represent a small portion of our overall system in the U.S, but had a disproportionately large negative impact on earnings, average unit volumes and same-store sales growth in the segment.”

He said in an interview that the store operators be given opportunities to relocate and open locations where the company sees a better prospect for profitable growth.

Read more at: The Globe and Mail