By Carl Lisa, Esq.Published October 28, 2013Category A Look at the Law 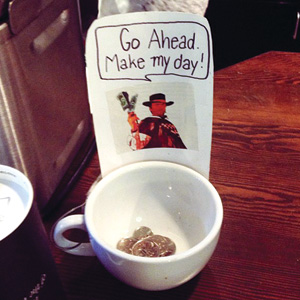 Tip pooling is an issue Dunkin’ Donuts franchisees in many states have been watching closely. Several franchise owners have been sued for allowing shift supervisors to share in the tips collected at the counter, even though these supervisors have limited managerial authority and spend the majority of their shifts serving customers. These lawsuits have prompted many franchise owners to remove tip collection cups completely, though, in a case that is still pending, one franchisee in Massachusetts was actually sued for failing to provide a tip cup.

Now, a decision involving New York Starbucks baristas (counter workers) and shift supervisors could establish a new precedent in other states and limit the liability of franchisees who allow tip pooling. The New York Court of Appeals for the Second Circuit has held that Starbucks shift supervisors are entitled to share tips left in a jar at the counter. The ruling in Barenboim, et, al v. Starbucks Corporation and Winans v. Starbucks Corporation strengthens the position franchisees have supported that supervisors should be allowed to share in the tips since they work alongside counter staff serving customers and have limited managerial authority. The case also provides an important distinction as to where the line of managerial authority is drawn in New York State because it encompasses both shift supervisors and assistant managers.

First regarding shift supervisors, the Court agreed with Starbucks, that the major responsibility of the shift supervisors is wait service and they perform the same customer service duties as baristas, even though they do perform limited supervisory duties which do not include hiring and firing. In doing so, it rejected the claim of the baristas that even though shift supervisors receive a higher hourly wage, they should not be allowed to receive tips.

With regard to assistant managers however, the Court sided with Starbucks that the assistant managers had too much supervisory responsibility, such as creating schedules and hiring and firing, and could not fairly be characterized as employees similar to general wait staff. Therefore, they should not be entitled to share in the tips.

The Court based its decision on the New York labor law provisions which provide that employees who directly provide wait service to customers are tip pooling eligible, although they provide limited supervisory duties.

While other courts, most notably California, have also ruled that it was lawful to include shift supervisors in the sharing of tips, Massachusetts law stipulates that only those with “no managerial authority” are permitted to participate in a tip pool.

At present the Massachusetts Legislature is considering an amendment to its tipping law that would closely align the law to the above ruling to ban assistant managers but not shift supervisors from receiving tips.