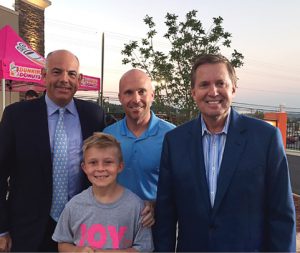 For 16 years, George Ross worked in Times Square for Morgan Stanley as an Institutional Equity Trader. Day in and day out he traded technology stocks worldwide to institutions and hedge funds.

But it was his job, and he anticipated sticking it out for the long haul. That was until late 2006, when his old college classmate Dan Connelly, chairman of the DDIFO board of directors, told him about some opportunities within Dunkin’.

“One thing led to another and in December 2007, we ended up acquiring four stores in Charleston, South Carolina,” Ross says. “I left Morgan Stanley and became the CEO [of Coastal Franchising] and the person running the business from the day we started.”

He signed a 24 store development agreement with Dunkin’ Brands, opening five new shops in 2008. “The plan was always that we wanted to build a larger franchise network. We got in with the thought of having a lot of stores. However, as the recession hit and things slowed down we made adjustments, and waited to make sure that our investments would pay off,” Ross says.

“We definitely picked a very challenging time to launch a new business as the 2008-09 recession hit the Carolinas very hard. We had challenges on the sales side because of the economy and on the credit side because of bank lending, as well as just being new to the brand.”

Ross knew a lot about business, but little about restaurant franchising, which caused some worries and concerns. “You hope you get it right. Becoming a new franchisee at Dunkin’ is a monumental challenge. We all know how complex it is for our crew and managers, and it’s even more complex for franchisees,” he says. “But all we can do is work hard every day trying to improve our business and our skill sets. Integrity and hard work are keys to the success of any business.”

Ross rode out the recession and in 2010 jumpstarted his development. Today, he has stores in five markets: Charleston and Florence, South Carolina and Charlotte, Wilmington, and Raleigh, North Carolina, where Ross recently signed on to develop seven new stores in the Research Triangle region.

“We’re acquiring four before the end of the year and we have six stores under construction, so certainly by end of Q1, we’ll have about 50 stores.” Ross says the first restaurant under this agreement is on target to open in 2018.

Ross’s development timeline has been on the fast track. We asked this former equities trader what he has learned about operating a large network of restaurants.

“It’s about allocating your time and being able to communicate and delegate. You have to give people a title and the power to do things,” Ross says. “From that perspective, there isn’t that much of a difference [between owning five stores and 25 stores]. You’re just managing more and more people.”

“You can’t do it all, so as you grow, it’s an evolving structure. It’s never static. You have to have a team behind you, with honest, committed people that have the same core values that you have and you must have systems in place,” Ross says. “People and systems equal success at any level.”

While many franchisees will say profits improve once they have at least five stores, Ross says it’s not so cut and dried.

“There are times when we benefit from economies of scale, and others when we have too much overhead and not enough stores. For instance, if you have two stores, it’s hard to have a district manager, but when you have 10 stores, one district manager isn’t enough. As you grow, you get to a certain number of stores and you have to keep adding people,” he says.

Beyond Donuts and Coffee

A part of the business Ross says he particularly enjoys is community involvement. For the last decade, Ross has been active with the Dunkin’ Donuts Joy in Childhood Foundation and currently serves as the co-chair of the Southeast Chapter. In Charleston, his stores have partnered with the Medical University of South Carolina (MUSC).

“We are one of the major benefactors to the new children’s hospital that is under construction. We are part of that building, and we’ll have a store in the new hospital,” Ross says.

In Charlotte, Ross and the Dunkin Foundation have partnered with the Bring it 4 Braylon Foundation, which helps alleviate the burden associated with pediatric cancer by providing comprehensive support to families and individuals who are fighting the disease. Additionally, Ross supports local food banks and hospitals with all his stores participating in charity events year-round.

“The interaction between the brand and the local charities is literally the fabric that ties us to our communities and makes it a special brand. It’s the most rewarding thing we do. It’s very near and dear to me and something we work on every day,” Ross says.

When Hurricane Irma struck, Ross says his stores were able to reach out to communities in a unique way. While some of his locations are near the water and were affected by the storm, his inland stores in the Florence, Charlotte and Raleigh markets experienced a large influx of people who had evacuated from Florida, Georgia and the Carolina coast, looking to relocate for a period of time.

“Our managers were trying to make sure that besides providing service, they welcomed customers to their new Dunkin’ for a week before they could return to their communities,” Ross says. “Customers have an unbelievable bond with the brand and their stores. They often say, ‘That’s my Dunkin’,’ and we made sure to let them know in those markets that they could make our stores their Dunkin’ for the week. Many people appreciated it and we put some normalcy in their life. Even if it was just for 15 minutes, it allowed them to feel comfortable in a place they’re familiar with. That’s what this business is all about.”

A balancing act familiar to all franchisees

Like many franchisees, Ross talks about the need for balance, both at work and with his family.

“On a daily basis, I’m involved with trying to run the overall business from a planning and strategic perspective down to reviewing contracts and renegotiating contracts, to attending a RAC, CML, or an Ad Committee meeting,” notes Ross. “There’s always issues at every corner that need attention at work as well as at home.”

Ross and his wife Liz, have four sons ranging from a freshman in college down to a 5th grader.

“They all play competitive lacrosse and travel a lot for the sport, so I’m always trying to make it to their games. I try not to be Dunkin’ all the time at home, but the reality is I may be driving them somewhere while on a conference call. Their impression of my work ethic is definitely ‘Dad is always working.’”

From his days at the equity trading desk, to his time behind the counter at a Dunkin’, Ross has learned the importance of recognizing what’s working and what’s not. It’s a skill he applies at home.

“You have to be able to search for the answer and solution, if something isn’t working. A great skill I’ve learned in my careers is the ability to look at things quickly and determine what’s working and what’s not, and not be afraid to change direction,” he says.