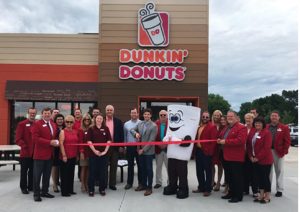 In 1979, Dunkin’ Donuts opened its 1,000th restaurant. In 1990 – after it was acquired by Allied-Domecq – the brand began expanding. It opened location No. 2,000; and just two years later came No. 3,000. The rapid expansion into places like California, Colorado and Texas came without the kind of marketing strength and supply chain infrastructure the brand enjoyed in its core markets. The result was later referred to as “retrenchment.” Dunkin’ shops closed across the American Southwest and West Coast.

Expansion 2.0, which kicked into high gear around the time Dunkin’ turned 60, promised to bring the brand to places where it had drawn a following and left disappointed customers behind. That was news of interest to business school buddies Jody Goehring and Greg Vasey.

“After we graduated from the MBA program at the University of Chicago in 2009, Greg had the intriguing idea of researching the franchising market, and decided to become a Five Guys franchisee in Boston and Vermont,” according to Goehring. Upon hearing Dunkin’ was making development areas available in emerging markets, he says, the pair thought the opportunity to help pioneer Dunkin’s return to Oklahoma’s second largest city was too good to pass up. So they teamed up for both the burger and coffee business, establishing Hyde Park Ventures, a vertically integrated private holding company to buy real estate and develop multi-unit, blue chip restaurant franchises.

“Greg and I always wanted to do something together so, on the back of his success with Five Guys, we decided to buy into the Dunkin’ system in April 2016, and continue to grow and invest with it as well as Five Guys,” Goehring says.

Between 2009 and 2016, while Vasey was building the Five Guys business in the Northeast, Goehring was on Wall Street, advising on mergers and acquisitions and raising capital for tech and telecom companies. His M&A experience at UBS Investment Bank, coupled with management consulting he gained at Booz Allen Hamilton, made him an attractive partner for Vasey.

What made Dunkin’ so appealing? According to Goehring, it was simple: the product.

“When we look to invest in brands in the restaurant franchise space, consumer passion for the product tops our list. We were drawn to Dunkin’ Donuts because of its overwhelming brand value to consumers; it’s relatively unmatched out there and is similar to what we saw when we invested in Five Guys in the burger world,” he says.

They also liked that Dunkin’ is accessible at its price point, and offers consumers speed and efficiency.

“If people love the product and you deliver on it, it’s a self-perpetuating business model and one we knew we wanted to be a part of in a big way,” says Goehring, who still works as the vice president and head of corporate development at digital promotions giant RetailMeNot.

Before signing with Dunkin’ Brands, Goehring and Vasey looked at all the markets. Tulsa caught their eyes because it is Oklahoma’s second largest city with a metro area of nearly a million people but no existing Dunkin’ Donuts restaurants. In 2016, they signed a development agreement to open 10 new Dunkin’ restaurants in Tulsa, starting with the suburb Broken Arrow, a community with the fourth largest population in the state.

“In Broken Arrow, we found a fantastic piece of land in a high traffic area that we were able to acquire for a good price,” says Goehring. “Our overwhelming preference is to buy the land and develop ourselves if we can find ways to create value,” says Goehring. This was one of those clear cases.”

One year after signing their deal, Hyde Park Ventures opened three new locations, including a first of its kind kiosk inside Walmart Store No. 1 in Bentonville, Ark.

In Tulsa, many remember when Dunkin’ Donuts coffee and snacks were available. The brand had its original fans, plus those who had moved to Tulsa from traditionally Dunkin’-rich territories.

“The brand had been advertising for a few years that Dunkin’ was going to come back to Tulsa, and there was a strong demand with people who grew up in the East Coast and now live in Tulsa,” notes Goehring. “In fact, there was a Facebook page titled ‘Bring Dunkin Back to Tulsa,’ which had almost 800 followers.”

When opening day came, on Dec. 19, 2017, more than 100 people had already been camped out to get the first taste of Dunkin’ coffee and donuts. By the time the doors opened, the line was more than 500 people long. When Goehring saw the line at 4:30 a.m., he saw the evidence of how customers loved the Dunkin’ brand.

Among those lined up was the founder of that Facebook page, and Goehring got to meet him.

“It was a lot of fun,” says Goehring. “He sat down and talked to me for about 30 minutes. It’s great to see people get that excited about coffee and donuts. This is our investment thesis in Dunkin’ playing out.”

“We served coffee, donuts and hot chocolate all night, so no one froze or starved, and three different TV channels came to conduct interviews,” says Goehring. “It was a lot fun to see the excitement from a community that hadn’t had Dunkin Donuts in decades. There was a lot of reminiscing about old Dunkin’ locations and nostalgia around parents sharing in their kids’ first Dunkin’ experience.”

Getting the mix right

Donuts were big sellers at the grand opening, and still occupy a large percentage of sales. But, as Vasey and Goehring learned in business school, sales of higher margin products – like coffee – are the key to driving profitability.

“We need to educate our consumers about our beverage offerings. Our aim would be at 50 percent beverage mix over the next six months, but right now we’re baking donuts overnight, smiling and giving people what they want.

“We had a very large opening day and the first week was great, but you can’t get everything 100 percent right away, so for us right now it’s about building a fantastic team and making sure the product is great, and the speed and service is unmatched,” says Goehring.

He emphasizes that creating the right team is crucial.

“We have a lot of young people who we are grooming to be general managers of our stores. At any restaurant, any day, it’s all about the people you hire, how they perform and how long they want to stay with you,” says Goehring. “We want to stand out as a top tier operator and investor, and part of that is watching a group of people come in, often times for their first jobs, and molding them to make an impact for our business and for them professionally.”

Besides the competition to hire the best, The Broken Arrow Dunkin’ faces real competition from established coffee places, like Starbucks, McDonald’s, and the convenience store QuikTrip.

“People love QuikTrip, so the way we position ourselves in the market is that we have the most convenient service,” says Goehring. “QuikTrip doesn’t have a drive-thru so we were sure to position the store right so that we conveniently catch people on their morning commute to work.”

They also plan to make an impact in the community as they do with their existing Five Guys and Dunkin’ locations.

“Local involvement is huge,” says Goehring. “We sponsor community Little Leagues, and work with churches and schools. We’ve also found Spirit Mornings for sports teams to be effective marketing. We carve out a portion of the sales that the teams drive in to go to them, so they raise money for their team while we get exposure.”

They also hold spontaneous product drops to local businesses and bring Santa in over the holidays to their stores. “The more out there you are, the more top of mind you are with consumers,” says Goehring.

Today, the two guys own 16 Five Guys restaurants and seven Dunkin Donuts’ shops across Massachusetts, Vermont, Oklahoma and Arkansas. And their deal calls for opening 10 more Dunkin’ Donuts restaurant in the Tulsa market over the next 5 years.

With the opening of their express kiosk at the Bentonville Walmart, the partners see even more opportunity.

“[It’s] a concept that the brand is excited about and we were too when they asked us to be the first partner. It launched with success this summer,” noted Goehring. “We love being part of the strategy and working with a great leadership group at Dunkin’ Brands.”