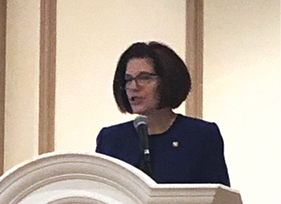 The Coalition of Franchisee Associations (CFA) recently held its annual Legal Symposium in Las Vegas. Even with the ongoing COVID-19 pandemic, the 2021 Legal Symposium enjoyed its highest attendance since the CFA began the annual program in 2015, featuring franchisees from 33 national brands. A featured speaker was Nevada Sen. Catherine Cortez Masto, who is a strong advocate for small business owners and the first Latina ever elected to the U.S. Senate.

The first-term Democratic senator (she is up for reelection in 2022), is leading efforts on Capitol Hill to protect entrepreneurs in the franchise sector, filing two important pieces of franchise legislation: The SBA Franchise Loan Default Disclosure Act of 2021and the SBA Franchise Loan Transparency Act. But she is perhaps best known for the report she issued to, it said, “provide more investor protection by recognizing that voluntary financial performance disclosure has failed to provide accurate information to investors.”

Her 87-page report, “Strategies to Improve the Franchise Model: Preventing Unfair and Deceptive Franchise Practices,” details unfair corporate practices by some franchisors and calls for improved financial transparency along with more FTC oversight.

At the conclusion of her address to the attendees, CFA had the opportunity to ask the Senator some further questions about her views on franchising, the labor shortage and other small business issues. A portion of that interview is presented here and has been lightly edited for clarity.

CFA: Do you think the issues raised in your report can be solved by legislation, or by regulation, or does the franchise relationship need to significantly change from within in order for real change to be made?

Sen. Cortez Masto: From my perspective in working with so many of the franchisees and the association, there’s a combination of things that can happen. That as a United States Senator, I think part of that is also federal legislation and that’s why the report helps me, and actually was instrumental, in the legislation that I’ve introduced—and informed legislation that was important for that transparency, particularly when it comes to some of these government-backed loans. I think at a federal level, if we’re going to provide government-backed loans to franchisees, they should have the accurate information and data that they need to make a decision whether they want to take out that loan.

CFA: What is Washington doing to combat the critical labor shortage?

Sen. Cortez Masto: You know, part of the labor shortage that we see even here in Nevada and Las Vegas in the service industry, is a combination of things and I will tell you one of the things is we lost so many women from the workforce. So many women that had to stay home because of the pandemic, to stay home with the kids who were, because there was no child care or they were learning from home. And so, what we have done at a federal level in both the American Rescue Plan and the COVID Relief packages, and moving into this next reconciliation package, is support child care, but also the child tax credit that we provided to so many families with children to help them afford these costs. We’re also going to be looking at major investments in child care so we can help so many families – and single parents – with child care so we can get them back into the workforce as well.

CFA: What do you think is the most significant concern in the franchisee/franchisor relationship?

Sen. Cortez Masto: [Making] sure that the playing field is fair for both sides. And I think what I have learned talking to so many of our franchisees is that it’s not a level playing field. And there’s a lack of adequate information and accurate information and transparency at critical times. I think that is the most important thing for anyone who wants to start a business is [to] have accurate information, data to help them decide whether or not they want to invest in a turn-key or a franchise.