By Ed ShanahanPublished May 17, 2016Category From the Executive Director

Arguably, one of the greatest works in English literature is The Canterbury Tales. This collection of 24 individual stories is presented as a story-telling contest by pilgrims traveling to visit a shrine at Canterbury Cathedral back in the 14th century. In this iconic work, author Geoffrey Chaucer is credited with giving birth to the first version of today’s popular adage that “many a truth is spoken in jest”.

I thought of that adage last month when I saw an editorial cartoon in one of the morning papers. The cartoon showed a man, obviously down and out, out of work, and holding a sign that said “Fought for 15 and won!”

I have no doubt that some of the elected officials who advocate for raising the minimum wage to $15 an hour for all workers truly believe that it is the right thing to do. After all, it is human nature to want to see our fellow man succeed and enjoy a good life – safe, well-fed, properly housed and clothed and well-cared for. But in trying to be the good neighbor we must remember, as another old adage cautions, a little knowledge is a dangerous thing.

Sadly, the majority of those advocating an excessively high minimum wage appear oblivious to the damage it can cause. In their own political interests, they advocate for a position because they believe it will win them votes in the short term and that is where they are focused – the short term. 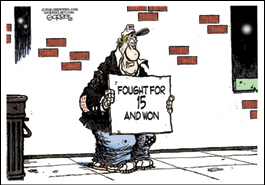 If we look back at the minimum wage discourse over the past few years, it’s interesting to note that it began with a call to increase the minimum to $9 per hour from the then-current $6.75 at the federal level. Of course, many states have instituted a higher minimum wage than is dictated by the federal government, but let’s put that aside. That $9 call came from President Obama in his 2013 State of the Union address. Quickly, that call for a 33 percent increase was insufficient for some in Congress who one-upped the President’s call by filing legislation to mandate a minimum wage of $10.10. No doubt they reasoned a 50 percent increase would, somehow, win them more votes.

From there, the floodgates opened. Politicians across the country pressed for higher minimums to punish the “greedy, money-centric business interests” that were keeping the minimum wage below the poverty level. Any responsible business owner who signs the front of the check knows, there must be a logical nexus between the value of the function a worker performs and the compensation that employee receives for performance of that job.

So, as more politicians pander to vocal advocates and organized labor interests, the trajectory of the proposed minimums continue to illogically and unsustainably rise: California set a statewide minimum wage of $10 per hour in 2015; New York followed when its Governor, Andrew Cuomo, arbitrarily picked fast food workers and unilaterally established for them a $15 per hour minimum. Refusing to be outdone, California Governor Jerry Brown – after acknowledging that another increase in the minimum wage (along with mandating paid sick leave for all employees) made no economic sense – signed into law a new $15 minimum less than one year after the increase to $10 per house was mandated.

So against a backdrop of political cowardice, how can we keep our businesses afloat and our economy growing at the same time our government mandates these unprecedented increases? The short answer is business innovation and our own ongoing political activism.

Over the past several months, we have heard and read about a number of QSR brands experimenting with self-serve kiosks and even pushing wider tests of their feasibility in a number of markets across the country. I would submit that technological innovation will continue to bring new economies to the quick service industry and we will adapt, and move on. Our customers will demand it and with sound business acumen, we will deliver the value our customers expect and deserve – it just may not be in the manner that short-term-focused politicians envision.

Many a truth may be spoken in jest, but there’s another longtime concept that warrants some consideration in the minimum wage debate: the law of unintended consequences. It exists, and whether government and political forces choose to recognize it or not, it will ultimately have a role in how minimum wage mandates backfire.

And that brings me back to the editorial cartoon . . . fighting for $15 an hour and winning may very well be the worst possible outcome for tomorrow’s low-skilled worker.