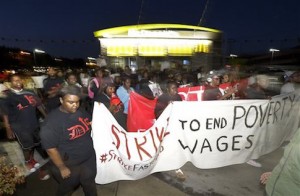 Advocates for a $15/hour minimum wage for fast-food workers (a.k.a. SEIU and other labor organizations) had scheduled more protests to take place yesterday in cities around the country.  How successful or effective they may or may not have been remains to be seen, but we certainly took note of an item this week that speaks to the origins (and identities) of the striking so-called “fast-food workers”.  In a release on Tuesday, the Worker Center Watch, a private watchdog organization that tracks organized labor, raised the specter of these SEIU-organized protests being deliberate and illegal union organizing activities, in violation of National Labor Relations Board regulations.  Under NLRB rules, organizations such as “Fight for 15” cannot organize workers as if they were representing them without filing a petition with the NLRB for a union election.  And, as if a sequel to “GruberGate“, this article in the Washington Free Beacon speaks volumes to game plan of these organizations as relates the entire “Fight for 15” campaign.  You should read this most enlightening article or you can see the highlights here, or you can even watch SEIU organizer Kendall Fells describe their thug tactics.  This issue is not going away soon, so stay tuned.