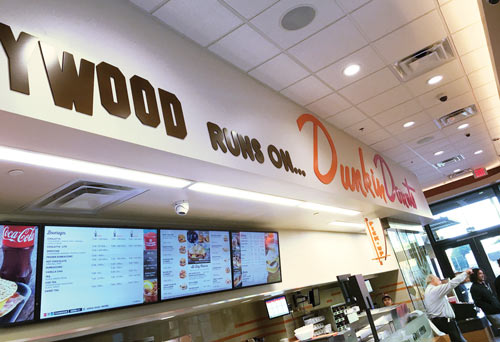 This time it’s different. When Dunkin’ Donuts’ pushed into California in the 1980s, people weren’t sleeping outside their shops to be first in line for the grand opening. Thirty years ago, coffee wasn’t as trendy as it is today; people brewed their coffee and drank it at home. It was hard to find a drive-thru to hit on the way to work. When Dunkin’s iconic pink and orange logo landed in southern California, it screamed “Donuts.” But, the donut market was pretty competitive and Dunkin’s west coast initiative lasted a decade before it ended in retreat. It was a different time and Dunkin’ had a different approach.

California 2.0, if you will, reflects better planning, as well as a better understanding of the market and the competition. Logistics are better because of the NDCP’s Arizona facility and the franchisees who are developing California this time – along with the Brand – are more sophisticated and experienced than their big-hair, 80’s predecessors.

There are approximately 20 Dunkin’s open for business in California. But, you know that Dunkin’ has truly arrived now that it’s in Hollywood. The shop near Tinseltown’s famous Hollywood & Vine intersection is part of Gary Haar’s network. A New Jersey guy, Haar is working diligently to overcome the inherent challenges in a place like LA. 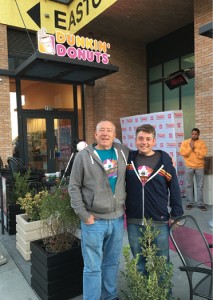 To understand why a kid who grew up in New York’s shadow, in the land Bruce Springsteen sings about, would fall in love with the sprawling city that is Los Angeles, you have to go back to the 1970s. Haar was a teenager on a seven-week tour of Israel with a synagogue youth group. While the trip itself was memorable, Haar says a big takeaway was the connection he made with other teenagers on the tour. “Half the teens on the tour were from LA, and I became lifelong friends with one of them. I went to visit him and his family many times, and began to gain an affinity for the city.” He says that affinity continued into his adulthood.

Right out of college, Haar used his bachelor’s degree in finance and worked for his family’s food service distribution business. After a few years, he bought a similar business in Connecticut. Haar wanted to be his own boss, but his timing wasn’t right. The business struggled and he was ready for a reboot.

“After that business failed, I didn’t want employees or customers, anymore so I tried day trading. I wasn’t very good at it though, and it didn’t go so well,” he says.

Haar spotted a Dunkin’ Donuts ad in the Wall Street Journal and The New York Times. “They were offering franchise opportunities in the New York metro area. Dunkin’ was a product I liked and bought, so I applied,” he says.

Haar and Dunkin’ signed their development deal in 2003. His first store was in Wyckoff, NJ—20 miles west of New York City. It was five minutes from where he grew up. Haar was successful and kept adding stores. Today, he runs eight Dunkin’ Donuts restaurants in New Jersey and he knows what all other operators in the heavily penetrated Northeast know: it’s hard to find opportunities to expand in your current footprint. Haar knew he had to consider another market.

“I was familiar with [LA] from visiting it so much. Before Dunkin’ opened the territory, my wife and I would drive around LA and I’d point out which spots I think would be great for a Dunkin’ Donuts,” he remembers.

So, when Dunkin’ made development territories in California available in 2013, Haar set his sights on LA. Haar applied for, and the brand awarded him, a store development agreement to open 10 stores on the west side of LA over eight years. He was thrilled. 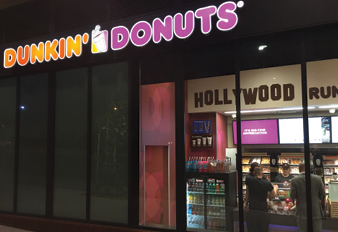 “There isn’t really another territory that I would have gone to outside of New Jersey. I didn’t want to go to Arkansas, Atlanta or Detroit. Instead of Florida, as me and my wife get older, we see ourselves spending more time in California. The weather is great, and we can be right by the ocean. Can’t beat that,” he says.

Haar opened his first store in 2014 in Santa Monica; it was no ordinary event.

“People slept in front of the store before the opening and there was a three-hour wait for people to get in the store for coffee and donuts,” he says. “We were on local stations and picked up by other local stations across the country.”

As he remembers it, his very first customer waited 30 hours outside to get in. Dunkin gave him free coffee for a year, and gave the next 99 customers swag bags.

“I was shocked at how the hype continued for about three months. It’s is still one of my better stores,” Haar says.

His next store opened in August, 2015 in Culver City. Haar rolled out a pink carpet for customers to stand on as they waited in line for the much anticipated Santa Monica (SaMo) grand opening. This restaurant also achieved DD Green status, which endeared it to the largely liberal beachfront community. (Editor’s note: You can read more about DD Green and the latest Green Elite Dunkin’ shop on p. 12).

Haar’s newest store is at the heart of Hollywood, in a new mixed-use development right along Hollywood Blvd. near the famed Pantages Theater called Eastown, which will offer 535 apartments, 75,000 square feet of retail. Given its location, it seems plausible that paparazzi photos capturing celebrities in their PJs with Dunkin’ coffee in hand may soon appear on social media.

There’s no denying that when Haar decided to break into the competitive landscape of America’s second largest city, he knew he’d face big challenges. Some are the same ones Dunkin’ faced in the 80’s: limited brand awareness, a shortage of prime real estate and competition from mom-and-pop Cambodian donut stores that have dotted the Southern California area for decades. Today, though, you also have to battle other big coffee brands.

“Dunkin’ is late to the game in California and a market the size of L.A. has been well-developed by a lot of competitors like Starbucks, Coffee Bean and Tea Leaf,” says Haar, who points out there are 100 Starbucks in his territory alone. “Even so, Starbucks is still looking for new sites so they’re competing for the same sites I am, and there are other coffee shops, as well as other QSRs competing for those sites too,” he says.

Then there is issue of drive-thrus. Haar’s LA stores don’t have them. “All the good drive-thru locations in my territory are pretty much occupied,” he says. “It’s not like there are empty corners anymore to put a drive thru on. There’s a McDonald’s or Jack in the Box or In-N-Out Burger on great corners that we’ll never get.”

That means finding good locations in busy strip centers and on pedestrian dense city blocks–like the location in Hollywood–
and hoping the stores can reach a sufficient revenue platform without the additional money drive-thrus bring. (Editor’s note: Turn to p. 16 to see our article about drive-thru success stories.)

Building a new Dunkin’ Donuts in Southern California also involves educating the city’s municipal inspectors. Haar says this has been a time-consuming enterprise, “Because they’re not familiar with our equipment and product lines so they need to learn about them to make sure what we have designed for our stores is in line with their codes. There’s a lot more back and forth.”

And, there’s Haar’s own learning curve to understand the operational differences between New Jersey and Southern California. “For instance, the stores [in LA] need to be earthquake resistant, and we have to get earthquake insurance, which you don’t have to get elsewhere. These are additional costs to operate that I don’t have in New Jersey. They’re not insignificant, but they’re also not going to change the equation of whether a store is going to be profitable or not.”

Haar considers wage issues in the same regard. As the calendar turns to 2016, California’s minimum wage increase to $10.00 an hour, compared to $8.38 in New Jersey. California also requires paid time off; every employee who works at least 30 days in a year is entitled to three paid sick days.

Haar views these as regular costs of doing business. “If you believe you can do business, then these issues are generally manageable. Even though minimum wage is lower in New Jersey, it’s not like I’m paying significantly less for employees. If I only paid the minimum wage to my New Jersey employees, I wouldn’t be able to staff the stores.”

But there is one challenge Haar believes will take some time to overcome, and that’s SoCal’s unfamiliarity with Dunkin’ Donuts—and not just from the consumer perspective. “In New Jersey, most people I hire have some knowledge of the brand. However, when we first opened our store in Santa Monica, not only did we have to train customers on our products, there was no employee population that had any real experience with Dunkin’,” he says.

Yes there are earthquake threats – a recent study showed a fault line close to Haar’s Hollywood location – and high operations costs. Yes, he is learning what it’s like to be a smaller player in a giant coffee and snack business, but LA is a place where the sun always shines and dreams come true. “It’s where I want to grow my business, and both my wife and I enjoy having an apartment here,” he says. “I don’t have plans to branch out to other states. Unless someone comes to me with an offer I can’t refuse, New Jersey and California are it.”