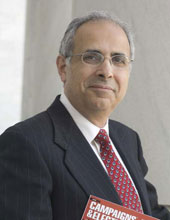 John Zogby writes at Forbes.com  a tale about coffee, tea (parties), marketing and politics. The latter two have always been kindred pursuits. Selling a candidate or a product both involve building trust, brand loyalty and appealing to both our baser and higher needs.

Also, like a business, politicians and parties must decide whether they want to profit from niche or mass markets. A business can do well selling good old black coffee in small-town America, or aspire to the Fortune 500 by selling a variety of coffees nationwide. A politician may be perfectly happy as an ultra-conservative congressman from rural Kentucky, or tack to the middle and run for president. Now let’s talk about Starbucks ( SBUX – news – people ), Dunkin’ Donuts, Democrats, Republicans and the Tea Parties.

Republicans are benefiting from the white-hot energy generated by the Tea Party movement, they must broaden their appeal to win back the White House or majorities in Congress. The danger for Republicans is that by embracing the hard right Tea Party membership, they might lose a more moderate, but still Republican-leaning demographic, those middle Americans who drink their coffee from Dunkin’ Donuts.

At least that is what the data showed in 2005. A Zogby Interactive survey then asked which coffee brand people felt best described them–Starbucks or Dunkin’ Donuts. George W. Bush took the Dunkin’ Donuts drinkers over John Kerry, 61% to 38%. Kerry won with Starbucks drinkers, 56% to 43%.

We asked a similar question in January of this year, and added McCafe to the list. This time, there was no difference in how Dunkin’ Donuts and Starbucks drinkers voted for President: 51% of both voted for Barack Obama. Party breakdown was also identical: 39% Democrats, 32% Republicans and 29% Independents.