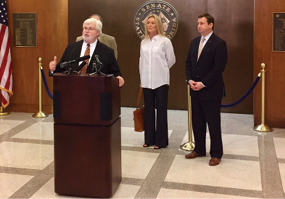 Even as challenges and roadblocks loom for small business owners in 2017, franchise owners have reason to believe the playing field is leveling with regard to how they are treated by their brands. Having secured Fair Franchising legislation in California, franchisees are closely watching another battleground state. This as they also keep an eye on Washington and the president’s plans to lower taxes on businesses.

It remains to be seen if efforts to repeal Obamacare will truly succeed; what is clear is the cost franchisees have to pay to insure their employees, along higher minimum wages and benefits. Costs of doing business continue to go up, but sales may have a hard time keeping pace.

A new poll indicates even the most faithful customers of quick service restaurants may be looking at cutting back their spending. And even as they face potential challenges with customers re-evaluating their dining habits, franchise owners are facing rising labor costs, resulting from both a tighter labor market and from increasingly successful efforts around the country to raise the minimum wage to $15 an hour.

Customers, in turn, are supportive of wage-raising initiatives, even as they tell pollsters they aren’t willing to pay more for their favorite items.

After the passage of California’s historic fair franchising legislation, industry-watchers knew it wouldn’t be long before the momentum carried into other states. Now comes Florida.

A fair franchising bill filed by a top Florida state senator has cleared the Regulated Industries Committee by a vote of 7-2.

The Protect Florida Small Business Act, sponsored by Sen. Jack Latvala, (R-Clearwater), chairman of the Senate’s Appropriations Committee, is aimed at restoring balance in the relationship between franchisees and franchisors, as California’s law does. This bill deals with issues that have been of top concern to Dunkin’ franchise owners, including “unjust terminations, restrictions on transfers and non-renewals,” according to DDIFO Executive Director Ed Shanahan.

The Florida Legislature is set to adjourn May 5 after its annual, two-month session. However, there’s still hope the fair franchising bill will also clear the judiciary and rules committees before lawmakers head home.

But even if the bill doesn’t clear the committee hurdle in time, DDIFO will still be working to promote the bill during Florida’s relatively active legislative off-season, says Shanahan, with the aim of getting the fair-franchising legislation off to a fast start after the Legislature comes back into formal session next January.

“It’s a short session but a long process,” Shanahan says.

The unemployment rate hasn’t been this low in years and wages are finally rising again after taking a hit during the Great Recession.

But quick-service restaurants may not fully benefit from those gains. In fact, a new survey finds, they may even see a drop in spending by their most faithful customers over the course of the year.

Regulars at various quick-service chains – those who stop by multiple times a week – say they plan to cut back on their trips by six percent over the course of 2017, according to the survey by AlixPartners. Asked why, half said they wanted to save money while 44 percent cited a desire to eat healthier.

That’s an important finding for quick-service brands, which generate large amounts of revenue from their “heavy users,” who are their “bread and butter” when it comes to sales, according to Werner. Of those who cited saving money as a reason, Millennials were interested in spending more on personal services like haircuts and housekeeping, while Boomers cited the need to save for retirement.

As regulars cut back, Dunkin’ franchise owners should consider focusing on keeping up sales and promotions, with an effort to entice more visits from customers now stopping once a week or less, Werner says.

Still, pledges made at the beginning of the year to eat out less, whether for health reasons or to save money, are one thing. Actually, carrying through with them is something else entirely.

“There are two ways to look at this,” Werner says. “Every one of us has the best intentions in January: ‘I wanted to shed that last 10 pounds. Where we dine versus where we say we will dine is TBD,’” he adds.

Calorie counts back on

The failure so far of the Republican-controlled Congress and President Trump to repeal Obamacare has a wide range of implications for business owners large and small.

For franchise owners, one key irritant embedded in the Affordable Care Act is the requirement that quick-service and other restaurants post calorie counts next to menu items.

Along with concerns over the impact calorie disclosures might have on diners’ eating habits, franchise owners are typically left with the burden of picking up the cost for the new signage and menu.

After years of angst and debate, the menu labeling requirement is which was to go live on May 5, was postponed for another year by the Trump administration. It is currently scheduled to become effective in May of 2018. The new rules cover all chains with 20 or more restaurants.

Along with calorie counts beside each item, menus and menu boards must include a statement which effectively says “2,000 calories a day is used for general nutrition advice, but calorie needs vary.” The aim, the FDA notes in its explanation of the new rules, is to give consumers context when weighing what items to order.

Still, it’s an open question whether knowing how many calories your favorite treat has will stop you from ordering it.

New York City led the way a decade ago in requiring calorie labeling. A USDA study in 2008 came to the conclusion that posting calorie information was ineffective, with diners simply ignoring the information.

However, a 2014 study published in the American Journal of Public Health that looked at calorie labeling in a county in Washington State came to a very different conclusion.

“Calorie information awareness and use increased significantly from 2008 to 2010,” the study found. “Unadjusted analyses indicated that the proportion who saw and used calorie information tripled, from 8.1% to 24.8% … Women, higher income groups, and those eating at a fast-food versus a sit-down chain restaurant were more likely to use this information.”

According to Werner, quick-service customers are more likely to use the calorie information to guide what they order for their children rather than themselves.

“Health and wellness have continued to tick up as extremely important,” he says.

So much for the idea that the Republican takeover in Washington, D.C. would slam the brakes on efforts to boost the minimum wage across the country.

The new Trump Administration has certainly signaled it will take a much more business friendly approach to regulation.

But the push to raise the country’s base wage to $15 an hour has long been driven by efforts on the city and state level.

And given the latest news, it’s hard to see any evidence of a slowdown here.

In Minneapolis, a proposal to boost the minimum wage had gained the support of more than half the 13-member City Council, with passage possible this summer, the Star Tribune reports.

Two new proposals at the Illinois State House would boost the minimum wage to $15 across the state, with one bill calling for an immediate jump to $15, while the second would phase in the increase by 2022.

And a key committee in the Texas House of Representatives recently considered nine different minimum-wage hiking bills that would raise base pay in the state from the current $7.25 to anywhere from $10.10 an hour to $15 an hour.

Los Angeles, San Francisco, Washington and Seattle are either at $15 an hour or headed there soon, not to mention two of the country’s biggest states, New York and California.

However, so far the Service Employees International Union, which has spearheaded the Fight for $15 campaign, has failed to pick up any big membership gains from its multimillion-dollar campaign.

In fact, the union, struggling with budgetary issues, last year cut spending on the campaign to $14.7 million from $16.4 million the year before, according to the Center for Union Facts, a conservative think tank.

If the first four months of 2017 are any indication, Dunkin’ franchise owners will have a lot to keep their eye on in the months ahead, both in their local state capitals and in Washington, D.C. While the repeal of Obamacare may seem like a pipe dream to some now, we probably haven’t seen the end of that story. And let’s not forget all those proposals out there to increase the minimum wage, as well as potential changes in how customers are spending their hard-earned free dollars. We’ll keep an eye out for you so you can do what you do best, making your customers happy.