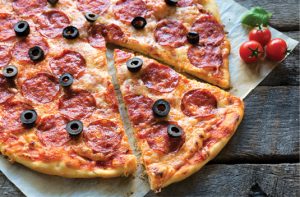 The more things change the more they stay the same.

That’s the theme when it comes to a couple of critical federal regulations that have the potential to have a big impact on the bottom line of the quick service industry.

Victory celebrations over the rollback of the joint-employer rule turned out to be short-lived, with the now Republican-majority National Labor Relations Board recently forced to reinstall the Obama-era rule.

And menu labeling, which got its start with Obamacare, is still on track to take effect on May 7th, though Congress is pushing to rein in some of the rules before they go live.

On the state level, key legislative battles are also looming on issues that could hit the wallets of Dunkin’ and other quick service franchise owners.

Maryland business owners are pushing back hard against a proposal to raise the minimum wage to $15 an hour while the beverage industry in Philadelphia has taken its case against the city’s controversial soda tax to the state’s highest court.

Read on for the latest scoop on these and other key issues.

Well that was quick.

Just when it looked like joint-employer rules that dramatically expanded legal liability for major restaurant chains were dead and gone, they’re back.

The National Labor Relations Board in mid-December rescinded its 2015 ruling that put franchisors on the hook for a range of issues, from pay to hours, traditionally left up to franchise owners.

For franchisors like Dunkin’ Brands or McDonald’s, the NLRB’s December ruling was a big win and came after years of lobbying by the restaurant industry. Restaurant chains large and small could no longer be held responsible for the pay and treatment of the employees of independent franchise owners unless they exerted direct control over them.

But NLRB Inspector General David Berry said not so fast.

On Feb. 9, Berry unveiled a report that took aim at the December vote and argued that a Trump Administration appointee to the NLRB should have recused himself from the 3-2 vote that axed the joint-employer rule.

Board member Bill Emanuel’s law firm had represented one of the clients in the landmark Browning Ferris-case, which, in turn, formed the basis of the Obama administration’s joint-employer mandate, Berry ruled.

The report – and the NLRB’s decision to take back its December vote that scrapped the joint-employer rule – came after a big push by Massachusetts Sen. Elizabeth Warren and other Democratic senators, according to QSR Magazine.

As a result of the NLRB’s latest vote, franchisors once again could be on the hook for pay and working conditions at locally operated franchises even if the control was indirect.

Worse yet, the board’s political dynamics could leave the joint-employer rule in place for some time to come.

The NLRB was able to previously push forward with its bid to scrap the joint-employer rule after the Trump Administration appointed a new member to the board, giving Republicans a 3-2 majority.

However, if Emanuel, one of three Republican’s on the five-member NLRB board, is forced to recuse himself from future joint-employer votes, it will leave the board deadlocked, with a 2-2 Republican/Democrat split, QSR reports. And, that will likely remain the case at least until another democratic vacancy occurs.

The Trump administration took the restaurant industry by surprise when it opted to move ahead with menu labeling.

After all, forcing restaurants to list calorie counts on menu boards got its start as a provision in Obamacare, and we all know the president’s thoughts on that.

Now, along comes the latest study questioning whether menu labeling actually does anything more than make customers feel guilty as they order their favorite treats.

A survey of studies on calorie labeling led by Dr. Jason Black, an assistant professor at Harvard, “finds little evidence of menu labeling shifting fast-food purchases, there are more promising findings that it may influence consumers at certain types of restaurants and in other types of establishments such as cafeterias.”

Block blames, what he calls the “unclear” findings on a lack of “well-powered studies with strong designs” on calorie labeling.

That said, Block and his fellow researchers reviewed 53 different studies.

Meanwhile, the U.S. House of Representatives recently passed legislation that would modify menu labeling requirements, though it does not appear that will alter the scheduled rollout on May 7, 2018.

The House proposal would allow restaurants to list calories on a “per serving” basis rather than based on the total item for sale, a particular issue for items meant to be shared with more than one person, such as an appetizer or a pizza. Restaurants with a big carry-out business, where orders are placed online or on the phone, could simply post calorie information online and skip having to modify menu boards, under the bill.

Whether the proposal will pass remains unclear, with menu labeling critics having pushed similar legislation since 2012. The bill is now with the Senate.

A top Maryland business group is warning that a proposal to boost the state’s minimum wage to $15 an hour could wipe out tens of thousands of jobs—many at small businesses.

A recent study by the Maryland chapter of the National Federation of Independent Business (NFIB) warns that an increase to $15 an hour could cost the state 99,000 jobs, with about a quarter resulting at businesses with less than 20 employees.

Mike O’Halloran, state director for NFIB, offered up the warning as Maryland lawmakers debate whether to hike the state’s minimum wage to $15 an hour by 2023, the Herald-Mail reports.

State Sen. Richard Madaleno (D-Montgomery) and State Delegate Shelly Hettleman (D-Baltimore) are championing the wage hike proposal, which has broad support among democrats in the Maryland Legislature, the paper notes.

Maryland’s minimum wage is set to increase to $10.10 in July, but supporters continue to press for a $15 minimum, even as critics predict a net loss of jobs and hours.

NFIB’s O’Halloran points to a recent study which found that when the minimum wage rose to $13 an hour in Seattle – on the way to $15 –, it led to a situation where “jobs and hours disappeared and wages actually dropped.”

Other states are also joining the $15 an hour debate.

Ohio lawmakers in both chambers have filed bills to hike the state’s minimum wage to $15 an hour, with proposals now active as well in Rhode Island, Massachusetts and Hawaii.

California and New York have already passed $15 an hour bills, with higher wages set to be phased in over the next few years.

A House bill in Arizona that would bar local governments from slapping taxes on specific foods has passed a clear hurdle in the state Senate.

The Senate Finance Committee unanimously reported out a bill that would not just stop cities and towns from taxing soda, but all food items, according to Arizona Public Media.

“Taxing sugar beverages is discriminatory and could easily be a gateway to several of the other 45,000 items carried in today’s grocery stores. Where does it stop? Chocolate milk at 1 percent won’t be taxed but chocolate milk at 2 percent will?” asked Tim McCabe, president of the Arizona Food Marketing Alliance, according to a story on the website of the public news website.

The move comes even as statewide polling shows majority support for some sort of soda tax to support Arizona schools.

In Philadelphia, the American Beverage Association as well as distributors and small retailers are leading a legal challenge to the city’s soda tax.

The Pennsylvania Supreme Court has agreed to hear the challenge by the industry groups, which contend the city’s soda tax violates state law by effectively being a second sales tax.

There has also been bitter infighting among Philly pols over how the new revenue – $79 million – is being spent and whether it is going to the causes it had originally been dedicated to.

As we’ve seen, rules and regulations have a way of eating away at profit margins for small business owners. The unexpected revival of the joint-employer rule and efforts to rein in menu labeling requirements bears watching. So does the battle against the soda tax in Philadelphia and Arizona, the outcome of which could have a big impact on whether soda tax proposals begin to multiply in other cities and states. One needs look no further than the ongoing efforts by activists and lawmakers to raise the minimum wage to $15 an hour, which have spread to a multitude of cities and states. Independent Joe will continue to monitor the issues, rules and regulations that will impact how you operate your business and profit from it, and it will be a major topic of discussion at the upcoming National Conference in New Orleans.