Just when you thought your menus were finally safe from government meddling, calorie labeling is back.

A long-standing and controversial federal proposal to force Dunkin’ Donuts and other restaurants to post calorie counts on their menus looked all but dead when President Trump took office last year. After all, menu labeling was a notable initiative of the healthy-food obsessed Obamas. Not to mention, the president’s fondness for fast-food is not exactly a state secret.

But menu labeling is alive and well, with the Food and Drug Administration pushing ahead with plans to take the new rules live in May. The return of menu labeling is just one of a number of big issues facing franchise owners as we head into 2018.

Federal immigration agents are cracking down on employers who hire illegal aliens, vowing to dramatically increase the number of investigations compared to the Obama years.

Meanwhile, there are lingering fears the dreaded “joint employer rule” may not be completely dead after all. 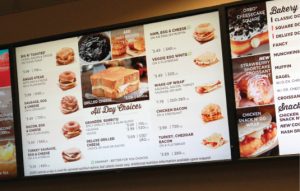 Menu labeling: Back from dead

This Forbes headline says it all when it comes to the restaurant industry’s reaction to the revival of menu labeling: “Food Industry Blindsided As Trump Administration Supports Obama-Era Menu Labeling Effort.”

That may be a slight exaggeration – after all, Dunkin’, McDonald’s and a few other big chains have already started posting calorie information some time ago.

That said, it’s safe to say that few in the quick service sector would have predicted the resurrection of the menu labeling rules by the Trump Administration. But, that is just what has happened and the FDA recently sent out an advisory announcing the 2018 launch of calorie labeling.

Starting May 7, all restaurant chains with 20 or more locations will be required to post calorie counts on menus, menu boards and vending machines, the agency notes.

The FDA advisory also includes specific directions on how individual items are to be listed. For example, if there are two different choices, the calorie counts of each should be separated by a slash, such as 150/300. If there are three or more items, then a range can be used, such as from 500-1,200 calories.

The FDA is also mandating this statement on menus and menu boards: “2,000 calories a day is used for general nutrition advice, but calorie needs vary.”

Immigration issues have suddenly become a whole lot trickier for franchise owners and other businesses to negotiate.

Immigration and Customs Enforcement agents kicked off the New Year with a bang, raiding 7-Eleven stores across the country. Agents swept into 98 stores, arresting 21 convenience store chain employees on charges of living in the U.S. illegally.

For its part, 7-Eleven, in a statement, has said it has terminated the franchise agreements of store owners who were alleged to have hired workers in the country illegally.

Look for more raids like this in the coming months. Thomas Homan, ICE’s enforcement director, has pledged to increase the number of I-9 investigations of employers suspected of hiring illegal immigrants by a factor of four or five.

“Today’s actions send a strong message to U.S. businesses that hire and employ an illegal workforce: ICE will enforce the law, and if you are found to be breaking the law, you will be held accountable,” Homan said in a press statement. “Businesses that hire illegal workers are a pull factor for illegal immigration and we are working hard to remove this magnet.”

So what’s a franchise owner to do to prevent getting caught up unwittingly in this dragnet?

Richard Rawson, a business immigration attorney with Davis Wright Tremaine LLP in Seattle, tells Nation’s Restaurant News that employers should sign up for the E-Verify program – something Dunkin’ franchises are already required to do. The online system, run by ICE, allows you to check on the legal status of an applicant or hire.

But that alone may not be enough.

Leigh Ganchan, an immigration lawyer at Olgetree Deakins in Houston, urges business owners to make sure their I-9 data is correct and logical, especially given that agents can ask for an excel spreadsheet to review the numbers.

While tips from the public may prompt an ICE investigation, the agency also searches employment data for suspicious patterns.

“Employers should look to several sensitive points in compliance once they are certain that they have the basics under control,” she writes.

Joint employer rule: Down but not completely out

The National Labor Relations Board in mid-December rescinded its 2015 joint-employer ruling that put franchisors on the hook for a range of issues, from pay to hours, traditionally left up to franchise owners.

For franchisors like Dunkin’ Brands or McDonald’s, the NLRB’s ruling means they can’t be held responsible for the pay and treatment of franchise employees unless they exert direct control over them. Under the now overturned rule, franchisors could be on the hook even if the control was indirect if certain conditions were met.

The ruling came after the Trump Administration appointed two Republican members to the NLRB over the course of 2017, gaining a 3-2 majority by the fall.

Critics argued the ruling unnecessarily muddied the waters and threatened to undermine the foundation of franchising, and it appears the battle to vanquish the joint-employer threat is not completely over.

Franchise industry leaders have noted that the joint-employer mandate could very well make a comeback someday.

After all, it would only take a new presidential administration to come along and replace the Republican majority with a Democratic one.

“If dependent upon NLRB composition, we can expect this to be a political football revisted every election cycle,” writes Craig R. Tractenberg, a partner at Fox Rothschild, in Forbes.

To that end, the International Franchise Association is backing federal legislation that would preempt future attempts to revive the joint-employer rule.

The House recently passed H.R. 3441, or the Save Local Business Act, which would permanently put to rest the joint-employer issue. However, there is no timetable at the moment for the bill to be taken up in the Senate, where the outlook is less certain in a chamber more evenly divided along partisan lines.

As we’ve seen, rules and regulations have a way of eating away at profit margins for small business owners. The revival of menu labeling rules, the ICE crackdown on employers, and efforts to permanently sunset the joint-employer rule all bear watching. So do ongoing efforts by activists and lawmakers to raise the minimum wage to $15 an hour and a proliferation of proposed taxes on soda and other sugary drinks. Throughout the year, Independent Joe will continue to monitor the issues, rules and regulations that will impact how you operate your business and profit from it.