Inventory, staffing, making donuts and beyond are all part of your daily routine and work as a franchise owner, so keeping up with laws and regulations that might affect your Dunkin’ Donuts shops can be mind-boggling and time consuming. Don’t fret. DDIFO works hard to stay on top of matters like minimum wage increases and Styrofoam bans so you can keep to what you know best—making customers happy. Here’s what’s brewing around the states.

This fall, unions in several cities organized rallies and wildcat strikes at a number of quick service restaurants calling for increases to the minimum wage. Already a number of state legislatures have approved higher minimum wages taking effect in 2014, which will directly impact franchisees’ operating costs.

According to Dr. Benjamin Litalien, instructor of franchise management at Georgetown University and principal of Franchise Well, a specialized consulting practice in franchising, “These artificial increases basically cause small businesses, like franchisees, who are in very competitive markets, to take less profit or pass on the cost to the consumer, which isn’t always possible without reducing customer expectation and satisfaction.”

Here is a look at how some key states are increasing their minimum wage:

• New Jersey from $7.25 to $8.25. Voters in the Garden State also approved an amendment to the state constitution to index the minimum wage to the rate of inflation.

Lawmakers in Massachusetts are proposing a minimum wage increase starting in July 2014 from $8.00 per hour to $9.00 per hour, with automatic $1.00 an hour increases each year through 2016.

By far the highest increase of any municipality is taking place in the city of SeaTac – population 27,000 – the boundaries of which completely envelop Seattle-Tacoma International Airport. Here voters passed what some call the “Good Jobs Initiative,” mandating a minimum wage of $15 an hour for all local workers. Much of SeaTac’s workforce is connected to the airport and includes many minimum wage hotel and restaurant workers.

Dr. Litalien from Georgetown University says any kind of wage control artificially affects the market. “If there are people willing to work for whatever a market rate is, you now have a government agency artificially setting a generic rate that they deem to be reasonable without any detailed or specific data about the work being done or the industry being affected.”

“In a free market society, if a person is looking for work and one employer offers them five paid sick days and another offers them none, that’s the individual’s decision about what works best for him or her. The free market should dictate what is competitive from an employment perspective not legislation generically set across a state,” says Litalien. “This is another issue where mandating it may be well-intentioned or sell well politically, but the facts are clear that the small business takes it in margin or the consumer takes it in higher prices.”

Two additional council votes, as well as a public hearing and the mayor’s signature, are required to adopt the measure.

In an effort to add revenue and balance to Maine’s two-year $6.3 billion budget, Democrats and some Republicans voted to override a veto by Gov. Paul LePage to raise Maine’s meals tax. This means that from October 1, 2013, through June 30, 2015, the 7% tax rate on the rental of living quarters, sales of prepared food, and sales of liquor sold on premises will increase to 8%. The general sales tax rate of 5% also increased to 5.5%.

Last month, the United States Food and Drug Administration published a Federal Register notice that partially hydrogenated oils – which create trans fats in food – should no longer be considered safe for consumption because of their link to heart disease. A 60 day comment period is underway, in which the FDA is gathering additional information on trans fats in order to determine whether or not to ban them from food production.

In November, a fair franchising bill was filed in the New Hampshire legislature for consideration during the 2014 session. The bill’s public hearing will take place sometime after the New Year, so now’s the time for New Hampshire franchisees to state their support to members of the New Hampshire House. The International Franchising Association (IFA) is already on record opposing the measure, writing in a letter to lawmakers that the measure would “weaken franchisee equity, damage brands, reduce product quality, limit franchisor assistance to franchisees, increase incentives for litigation and jeopardize contract rights.”

When California banned polystyrene cups and food containers, other cities followed suit including, Seattle, Washington; and Amherst and Brookline, Massachusetts. Many others cities like Philadelphia, New York, Boston and Chicago continue to consider a ban. In October, Washington, D.C. Mayor Vincent C. Gray proposed banning foam food containers as part of a legislative package he says, will “make the District of Columbia the healthiest, greenest, and most livable city in the United States.” The legislation bans “expanded polystyrene” in food containers, plates, clamshells, hot and cold beverage cups, meat and vegetable trays and egg cartons. Any business that uses ploystyrene to sell or provide food for consumption on or off the premises will be affected by the ban, including restaurants, grocery stores, food trucks, cafes, coffee shops, cafeterias, and supermarkets.

“As business owners we find less expensive ways to deliver services and products, but if those less expensive ways are ultimately damaging our environment or have other unintended consequences, than we certainly need to give them more thought,” says Litalien. “It can be challenging to be cognizant of our environment and to be cost efficient in our operations. One potentially valuable component of government is to look beyond the free market and at the whole picture.”

The D.C. Council will take up the proposal.

On December 12, Albany, New York County Executive Dan McCoy signed into law the Food Service Waste Reduction Act, which bans the use of Styrofoam containers in all chain restaurants. 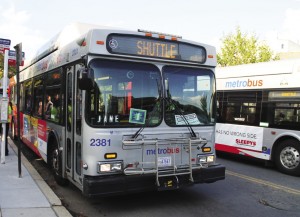 DC businesses to foot the bill for transit fees

Another component of D.C. Mayor Vincent Gray’s “green” legislative package would require businesses in the District to provide transit benefits to their minimum wage employees.

“The increasing high cost of transportation is a significant amount in the budget of the minimum wage employee, so I can see the good behind paying the fee for their transit costs,” says Marc Yaffe, who owns several Dunkin’ Donuts on military bases throughout Washington, D.C.

However, Yaffe adds that mandating the benefit across the board doesn’t make sense. “It depends on the location of the individual store. In areas where you have a lot of employees living nearby, they might not need this benefit, and an increase in wage, for instance, might better serve them. Employers should be able to choose which benefits make the most sense for their employees.”

As we usher in 2014, it is clear new regulations impacting small business owners in general – and Dunkin’ Donuts franchisees in particular – will emerge. Independent Joe is keeping an eye out for these issues and will continue reporting on them.