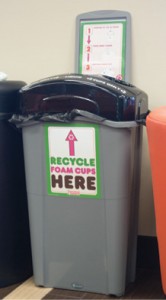 While you’ve been busy running your franchise and serving your customers, legislators, lawyers and union activists have busy doing what they do best—agitating non-issues into confrontations, passing new laws, formulating new regulations and filing new lawsuits. And, more often than not, these new rules and regulations are threatening to change how franchise owners run their business. As we do in each issue of Independent Joe, we want to provide you a look at what’s brewing around the country, from proposals to slap GMO labels on the food you sell to Styrofoam bans and even “wage theft” lawsuits, so you can be better informed.

With climate change in the headlines, legislators and regulators around the country can’t resist the temptation to grandstand and propose all sorts of new requirements and restrictions, Unfortunately, more than a few of the new rules appear aimed at saving the environment by targeting franchise owners, especially quick service chains like Dunkin’ Donuts. And, one of the hottest new legislative fads involves requiring restaurants to label genetically modified foods.

Vermont Governor Peter Shumlin recently signed a bill making the Green Mountain state the first in the country to require labeling of food products made with genetic engineering. Given as much as 80 percent of prepared foods could fall into this category, according to one estimate, that is likely to involve a wide range of ordinary items people consume every day at Dunkin’ Donuts and other coffee shops and restaurants across the country.

The regulations won’t go into effect for two years in Vermont, but Damartin Quadros, who owns three Dunkin’ shops, including one in Montpelier, the state capital, is already anticipating headaches.

He recalls having to pay hundreds of dollars to put up new signs when calories counts were required. He anticipates a similar hit when the GMO law takes effect.

“We ate all the costs,” Quadros said of the new signage for calories counts. “It will be another one of those things we have to comply with.”

Both Maine and Connecticut have passed their own GMO labeling requirements, which kick into effect once a neighboring state passes a similar law.

Activists are now pushing to get GMO labeling proposals on the state ballot in Oregon and Colorado, with proposals going down to defeat in California and Washington.

Meanwhile, Dunkin’ franchise owners like Quadros also now face new requirements that they recycle food waste instead of sending it out to the local landfill.

In 2011, Connecticut was the first state to ban commercial food wastes, requiring generators of two or more tons of food waste per week to recycle the materials rather than sending them to a landfill. Vermont followed suit in 2012, but with a lower, one ton limit, which will gradually be lowered to cover all food waste by the end of the decade.

A similar ban is slated to go into effect later this year in Massachusetts, and is already in place in New York City. On the West Coast, Portland instituted a food waste ban in 2011. San Francisco put a waste ban in place in 2009 which forced businesses and residents to separate recyclables and food waste from their trash.

We’ve watched as laws and regulations passed in one state are then introduced by lawmakers in neighboring states—sometimes with the argument that “if it worked there, it will work here.” Bans on Styrofoam cups and containers is one example.

San Jose followed San Francisco’s lead in the Bay Area banning Styrofoam cups and other food containers, with multi-state chains hit first, followed by an extension on Jan. 1, 2015 to all local restaurants and food trucks. The same thing happened with Seattle and Portland, which were early adopters of the ban. And, after Amherst, Mass. banned Styrofoam containers, Albany County, NY started its effort, which goes into effect this July and also includes packing peanuts.

Minneapolis is the latest big city to propose such a ban, which makes us wonder if its twin city St. Paul – or neighboring Midwest states like North Dakota, South Dakota and Wisconsin – will be next.

Washington, D.C. Mayor Vincent Gray is also on the record pushing for a ban in the nation’s capital. Efforts at grabbing “green” headlines are everywhere and immediately impact quick-service restaurants largely because they are so visible in their communities. Dunkin’ franchisees have experienced how issues over cups for coffee can be such a local lightening rod.

“I am for maintaining our environment, but it’s easy to look at the franchise sector as being the culprit, it’s easy to attack,” says Udo Schlentrich, co-director of the Rosenberg International Franchise Center at the University of New Hampshire. (The center is named after Dunkin’ Donuts’ founder William Rosenberg,
with money from his estate helping establish it.)

Dunkin’ and other franchise owners across the country are also facing more direct hits to their bottom lines.

In a case that has implications across the quick-service franchising world, McDonald’s employees at seven franchises across the country have sued their employers alleging wage theft—claiming they were forced to work extra hours off the clock. The suit didn’t stop at the franchise owners, with lawyers for employees also taking aim at McDonald’s Corporation, saying the company effectively encouraged the practices. Some McDonald’s employees allege they were forced to show up at a certain time, only to be clocked later when the first customer walked through the door.

A $1 million settlement was reached in a New York case which centered on similar allegations against Domino’s and Taco Bell. Similar complaints involving other restaurant chains have also been filed with National Labor Relations Board.

“Quick service restaurants are being targeted by a number of organizations,” according to Misty Chally, executive director of the Coalition of Franchisee Associations, of which DDIFO is a founding member. Chally believes the best defense for Dunkin’ Donuts franchise owners, and owners in other chains, may be a good offense.

Unions often find fertile ground for recruiting and lawsuits in unhappy workplaces where rules are broken. Schlentrich says franchise owners who do right by their employees will leave few openings for activists or labor organizers to exploit.

“Unions only get involved in extreme cases” where ‘abusive’ conditions prevail.”

Dennis Wieczorek, a partner and chair of the franchise and distribution practice at the Chicago law firm DLA Piper says it’s pretty clear that the union activists are “finding employees at the various locations and asking them to find reasons to complain. The end game here is not just focused on wage and hour issues, the end game here is to unionize.”

The big question now is not whether the minimum wage is headed up, because it is in many states, but rather, by how much?

While the wage debate is stalled on the federal level, cities and states across the country are taking matters in their own hands, mandating increases in the minimum wage business operators must pay their employees.

But activists, led by the giant Service Employees International Union, are back for more—staging rallies across the country pushing for an even steeper wage.

Seattle is testing the limits of a higher minimum wage, having approved a $15 per hour rate, to be phased in over seven years. It will apply first to large businesses and then to those with fewer than 500 workers, though employees of franchised businesses have to be counted in the aggregate. According to an interview International Franchise Association (IFA) President Steve Caldeira gave to CNN Money, that means a Subway shop that has eight workers will have to pay a $15 wage years before a non-franchised sandwich shop with the same amount of workers.

Momentum has gathered in other states for higher minimum wages. New York’s minimum wage is set to rise to $8.75 at the end of this year and to $9 at the end of 2015. The Speaker of the state Assembly, Sheldon Silver, says he supports legislation to accelerate these increases in the state’s minimum wage from $8 per hour to $9 and will press for passage before the current legislative session ends.

Overall, 38 states considered minimum wage issues in the 2014 session, according to the National Conference of State Legislatures, with Connecticut, Delaware, Maryland, Washington D.C., and West Virginia all enacting increases.

Lawmakers passed minimum wage bills in Vermont and Hawaii, with both awaiting final action by their respective governors. Vermont is poised to have the highest minimum wage in the country, with the state Legislature having voted to increase it over the next four years from $7.25 an hour now to $10.10 an hour by 2018.

Quadros, the Vermont franchise owner with three Dunkin’ shops and 50 employees, says even with the gradual escalation, the wage increases will hurt.

“To me, it’s making it really difficult for small business owners. Our biggest expense is payroll. It’s going to have a big impact on our bottom line.”

And while such proposals make for great political grandstanding, they don’t take into account the complexities and nuances of the franchise workplace, notes UNH’s Schlentrich.

Franchising not only provides a path to the American dream for hard-working owners, it’s also a key institution for training young and low-wage workers in the basics of business: from showing up on time to properly servicing a customer, he says.

“I believe there is not a single business system in America that has created more wealth than franchising.”

However, there is pushback by some states as well. An array of southern and Midwestern states, including Florida, North Carolina, Mississippi, Louisiana, Kansas, Indiana and Wisconsin, have all passed laws barring local city, town and county governments from mandating paid sick leave.

According to an article from attorney Jonathan Israel of Foley & Lardner LLP, “Battle lines have clearly been drawn by business interests who contend that such laws have a negative economic impact and drive employers to states and cities that are free of such regulation.”

A bumper crop of new regulations

As state legislative sessions wind down for the summer, we see 2014 has produced a bumper crop of activist legislation—from Vermont’s potential trend-setting GMO labeling law to Seattle’s push to hike the minimum wage to $15 an hour. With a few exceptions, the trend we are seeing in states across the country is towards more rules, more regulation and more lawsuits targeted at small businesses, particularly high-visibility, quick-service chains like Dunkin’ Donuts. DDIFO will continue keeping an eye out for issues that threaten your ability to maintain a profitable business.