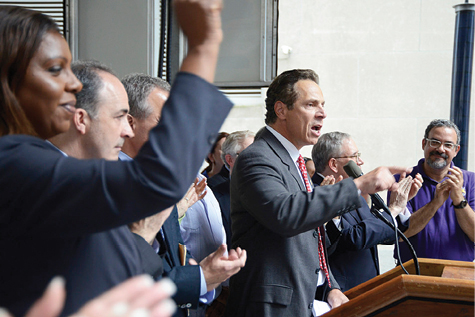 Customers may be lining up like never before for coffee, donuts and other treats as the economy rolls again, but Big Brother appears intent on crashing the party.

Dunkin’ and other quick service franchise owners are facing an avalanche of new regulations and laws across the country dictating everything from what you pay an employee to how you schedule their hours.

In a move that is likely to reverberate around the country, New York State will now boost the minimum wage for quick service restaurant owners to $15 an hour. But that is just the tip of the iceberg when it comes to the new challenges franchise owners face.

Congress and state legislatures are increasingly tinkering with workplace scheduling issues as well, while the National Labor Relations Board pushes ahead with its own rulings that critics contend could undermine the whole franchise system altogether.

One bright spot is California, where a deal between two major franchise groups has paved the way for the passage of a bill, one that would protect the considerable investment, from cash to sweat equity, that franchise owners pump into their businesses.

With Gov. Andrew Cuomo leading the charge, the Empire State’s Wage Board recently voted to phase in a $15 an hour minimum for all employees of fast-food chains with 30 or more locations. The hike will take place over three years in New York City, and six years across the state.

New York now becomes the first state to target an individual industry for such a wage increase, potentially opening itself up to litigation as it singles out quick-service restaurants, observers say.

Yet however the decision plays out legally, it will have a significant impact on the bottom line of franchise owners, notes Mary Chapman, senior director of product innovation at Chicago-based restaurant consulting firm Technomic Inc.

In a national survey by Technomic, 84 percent of 1,000 restaurant operators polled said a $15 an hour minimum wage would hurt their businesses.

That sounds harsh, but it makes sense when you crunch the numbers. Profit margins at restaurants are notoriously thin – 3 to 5 percent. A minimum wage increase of just 25 percent, which is less than the increase that yields a $15 an hour wage, would force franchise owners to either cut staff or boost prices by 5 to 7.5 percent, according to Technomic.

Still, franchise owners also have to think carefully before broaching the issue with customers, with Technomic’s poll also showing strong support for minimum wage increases among the public at large.

“Customers support minimum wage increases and operators fear that consumers don’t realize the impact on the local operator,” Chapman notes. “They think the big bad corporation is sticking it to the little guy, but it’s often the franchise operator, the smaller restaurant operator who lives in the community and whose own kids are looking for work,” who are taking the hit, she says.

New York’s big vote is likely to further encourage activists around the country to push minimum wage proposals, with the $15 minimum having been passed by San Francisco, Seattle and Los Angeles. A proposal in Washington, D.C. to boost the minimum to $15 an hour is pending.

San Francisco’s retail workers’ bill of rights went into effect in July, making sweeping changes to the way many franchise owners do businesses.

The new regs require business to post work schedules two weeks in advance and pay workers extra for having to change plans at the last minute. Part-time and full-time workers are granted equal status, with business owners obligated to offer extra hours first to part-timers who want to go full time.

Franchise owners must also pay workers who are on-call or sent home early.

San Francisco’s new labor ordinance, in turn, has provided a template for activists around the country as well as in the nation’s capital.

On the federal level, Sen. Elizabeth Warren (D-Mass.) is leading a group of senators pushing the “Schedules That Work Act.” Businesses with more than 15 workers would be barred from using split shifts and from putting workers on call or sending them home without pay.

Under the Senate proposal, quick service restaurant owners, as well as business owners in a range of service industries, would have to post workers schedules two weeks in advance or pay a penalty. If workers invoke heath, education, child or elder care when requesting schedule changes, the bill would require employers to sign off on those changes unless they can show “legitimate business reasons” why they cannot.

“There is really no reason for it,” said Ben Litalien, founder and principal of FranchiseWell LLV, a consulting firm. “The business owner is the one who has the eyes on the employee, who has the relationship with the employee, and who understands the needs of the employee better.”

Dunkin’ and other quick service restaurants across the country are already dealing with the headaches of putting up calorie counts alongside menu items, courtesy of the federal healthcare law.

So franchise owners haven’t exactly been thrilled by the prospect of someday having to deal with GMO labelling – and the concerns it might raise among consumers already skittish about tales of “Frankenfoods.”

That labeling nightmare looked like it was about to come true back in 2014 when Vermont passed a bill requiring labels on foods containing genetically modified organisms, or GMOs. Connecticut and Maine have passed similar laws that will go into effect once other states in the region act as well.

But what appeared to have been a growing state movement may have met its match in Congress, with the House of Representatives passing a bill in July that would block states from enacting GMO labeling laws.

On top of that, Vermont is also facing lawsuits from various food industry groups as well.

The House voted 275-150 in favor of the bill, with 45 Democrats joining the Republican majority.

A groundbreaking California bill, one that would protect all franchise owners from having their businesses arbitrarily terminated by their franchisors, has cleared one of its last big hurdles.

Opposition to the California Franchise Relations Act by the International Franchise Association (IFA), which represents franchisors, was a key element in the demise of the bill last year, when Gov. Jerry Brown killed it in an 11th hour veto.

But it looks like that won’t be the case this time around, with the Coalition of Franchisee Associations (CFA) and the IFA recently coming to a consensus where the IFA will end its opposition.

The core of the bill, which would protect franchise owners from arbitrary termination and require franchisors to compensate business owners if they decide to shut down or sell a franchise remains intact. But changes in the language of the proposal were included to satisfy some of the IFA’s concerns.

“We still have a way to go,” says John Gordon, principal of Pacific Management Consulting Group and DDIFO’s restaurant analyst, who has been involved with the effort. “It’s moving.”

The bill was amended to, among other things, make it clear that a franchisor which pays to buy out a franchisee “is entitled to receive clear title to and possession of the items,” according to a joint letter put out by both industry groups.

Additional language was also inserted into the bill stating that the franchisor’s obligation to buy out a franchise owner is moot if both sides agree to terminate or not to renew.

For Dunkin’ and other quick service franchise owners, good times never felt so bad, to put a twist on an old Lionel Richie lyric.

The economy is booming and customers are spending, with the potential for growing profits as we head towards the end of 2015.

Yet how much of those profits franchise owners will actually be able to pocket remains to be seen as the federal, state and local governments boost minimum wages and mandate shift schedules.

For Dunkin’ Donuts franchise owners facing new mandates for a $15 an hour minimum wage, Franchise Well’s Litalien has a few words of advice.

“You had better field the very best team you can possibly put in the store,” Litalien said. “There will be no margin of
error when you are paying someone $15 an hour to work in a fast food environment.”

“Your expectation of their productivity has to go up,” he says.