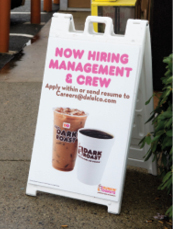 Warning: A tidal wave of minimum wage laws and food labeling red tape may soon be headed your way.

Dunkin’ and other quick service franchise owners are facing what is shaping up to be a challenging and unpredictable 2016.

A no-holds-barred presidential race has pumped new energy into an array of activist causes, from the Service Employees International Union’s campaign for a $15 an hour minimum to new proposals to require labeling for GMO’s, sugar and salt.

Possibly the biggest change has been the $15 an hour minimum wage campaign, which, after scoring some successes in a number of cities, has suddenly jumped to the state level and is getting attention nationally as well.

It comes even as new overtime regulations are poised to further push up payroll costs for franchise owners.

Dunkin’ franchise owners, especially in blue states that lean Democratic, could face escalating payroll costs over the next few years.

The union-led $15 an hour minimum wage campaign has picked up significant momentum as the 2016 presidential race has kicked into gear.

Democratic candidate Bernie Sanders’ campaign has put the spotlight on the issue of income inequality, with the $15 an hour minimum becoming a political touchstone for the left.

What started on the local level with a few deep blue cities like San Francisco and Seattle boosting the minimum wage within city limits has now made the jump to the state level, with Democratic governors scrambling to get out ahead on what has become a key issue for their supporters.

California Gov. Jerry Brown in early April signed into law a bill that will boost the state’s minimum wage to $15 an hour by 2022. Not to be outdone, New York Gov. Andrew Cuomo inked a $15 an hour minimum wage deal on the same day.

Boston Mayor Martin Walsh is now calling for a $15 an hour minimum wage, though he faces likely opposition from Republican Gov. Charlie Baker.

Still, there is likely a ceiling to how far the $15 an hour minimum campaign can go.

Even as the issue starts to get national attention – with Sanders making a $15 an hour minimum one of his campaign pledges – any wage bill would face tough sledding in a polarized Congress, Gordon contends.

“There is almost zero chance it will go national,” says Gordon.

Meanwhile, franchise owners face a new threat to their bottom lines, this one coming out of Washington. D.C.

Managers across the country, including in the quick-service sector, will soon find themselves eligible to collect overtime, under new federal labor rules.

The new regulations, set to kick in over the next few months, will require companies to pay overtime to managers who make less than $50,000 a year.

With managers often working as much as 60 hours a week or more, this could prove to be a budget buster for some franchise owners.

Particularly vulnerable are chains where managers are paid less than $50,000 a year, a group that includes Dunkin’, according to a recent note by a Wall Street investment firm.

(You can read more about this legal decision)

Calorie labeling may turn out to be the least of the menu labeling challenges franchise owners may soon face.

The salt shaker symbols, in turn, are accompanied by an appetite killing warning that “high sodium intake can increase blood pressure and risk of heart disease and stroke.”

However, Dunkin’ Donuts franchise owners in the Big Apple have received a temporary reprieve thanks to a lawsuit filed by the National Restaurant Association.

Undeterred, a Brooklyn councilwoman is now pushing for yet another crackdown, with a proposal requiring restaurants to put up posters explaining the impact of sugar and carbs on diabetics and pre-diabetics.

And the salt crusade may be poised to go national.

As he winds up his last year in office, President Obama is gearing up to take on excessive salt in foods, POLITICO has reported.

The rules, expected to be rolled out sometime in the next several months, would set “voluntary” targets for how much sodium can be put in processed foods.

Dunkin’ Donuts franchise owners will need to carefully examine their payroll structure and how they do business in order to stay ahead of these coming changes, Gordon advises.

With the cost of labor headed up, operators will need to find ways to reduce the number of hours worked.

If a franchise owner has some shops operating 24/7, one possibility might be cutting back. That might mean closing during the wee hours of the morning and instead opening at 4 or 5 a.m.

Staying open 24 hours a day can be expensive while adding significantly to wear and tear, Gordon says.

The new overtime rules will also require some quick thinking on the part of franchise owners.

If an assistant manager, for example, is making $40,000 a year, it might make sense to boost the employee’s salary past the $50,440 mark. That, in turn, would make the manager exempt from the new overtime rules, he says.

“They might jigger some of the wages up so they are not conflicting with the overtime rules,” Gordon says.

Conversely, if a manager is making closer to $30,000 a year, it might make more sense to convert the position from a salaried job to an hourly one.

And franchise owners may also need to reemphasize an age-old retail technique, upselling.

That means convincing customers to upgrade their orders to buy more than what they came in for, Gordon says.

At the same time, franchise owners may also want to take a look at getting rid of any down selling that may be happening, such as a cashier urging a customer to buy a less expensive value meal, he noted.

A wild ride ahead

Election year, 2016 is turning out to be an action packed one for Dunkin’ franchise owners.

The hotly contested Democratic presidential primary has pushed to the forefront some key bread and butter issues crucial to franchise and business owners across the country.

And it’s not just the candidates who are sounding off.

Democratic governors and mayors, eager to grab their share of the limelight, are racing against each other to $15 an hour minimum wage laws.

Given we are not even halfway through 2016, it promises to be a very interesting year.

As always, we will keep an eye out for issues and stories that could impact your bottom line.