The pandemic may have receded as a public health crisis in the U.S., but it has left in its wake a number of labor and economic challenges that franchisees of quick-service restaurants will be dealing with for months and even years to come. From union agitation to higher food prices to employee wage and benefit costs, operators of small businesses across the country are feeling the pressure. We look at some of these pressing issues in this edition of What’s Brewing. 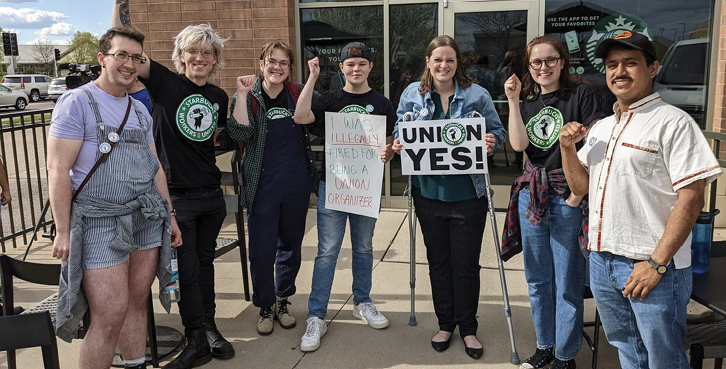 Starbucks founder Howard Schultz returned to his CEO office last month and immediately tried to calm things down at a company racked of late by management upheaval and employee dissension.

One of his first actions as interim chief executive was to try to reassure employees that Starbucks was returning to its old ways and values that helped it grow into a global java giant. But even as Schultz was holding forums to listen to employee concerns, baristas were holding elections to seek union representation.

Within days of his return, employees at two more Starbucks stores in the Boston area and six stores in upper New York voted to form unions, bringing to just over 50 (at press time) the number of Starbucks stores organized in recent months. Some of these efforts were underway before Schultz’s return – and the total number of shops voting to organize represent less than a quarter of a percent of the 9,000 company stores now in operation.

But Schultz, who has vowed to travel around the country to meet with employees and customers, clearly has his eye on unionization efforts at other Starbucks stores. Indeed, there are now more than 230 other Starbucks locations across 25 states that have filed for union elections with 118 of those already scheduled by the National Labor Relations Board.

The company’s official stance is that it will respect the will of its workers (or “partners,” as Schultz refers to employees) and will negotiate with employees’ unions in good faith.

Still, Schultz has made clear that he wants talks with employees to proceed “constructively” and not “distracted by the different vision being put forward by union organizers at some Starbucks stores,” as QSR Magazine reported.

“While not all the partners supporting unionization are colluding with outside union forces, the critical point is that I do not believe conflict, division, and dissension—which has been a focus of union organizing—benefits Starbucks or our partners,” Schultz added.

That’s not exactly an open declaration of war against unions, but Schultz’s comments are a strong signal that he’s determined to head off yet more elections – and union wins (which are at 85% of elections held thus far) – at the chain.

It remains to be seen whether the unionization of Starbucks, as well as smaller, regional coffee shops, is a remnant of the pandemic’s labor shortage, which gave workers greater leverage to seek higher pay, better benefits or union representation. Franchisees at Dunkin’ and other Inspire Brands have been keeping a close eye on these activities and stepping up their efforts to engage with employees. Unions like to exploit managers that don’t listen, underscoring the need to let workers feel like their voices are heard.

As mentioned above, the pandemic-era’s economic turbulence has given a bargaining edge to labor when it comes to demanding and getting higher wages and benefits.

Even as minimum wages were already increasing across the country, the pandemic prompted many states to aggressively push for progressive economic policies, blaming uncertain economic times. The bottom line: Dunkin’ franchisees and other business owners have become all too familiar with escalating payroll costs over the past few years.

But some Democratic lawmakers in California are taking the wage-and-benefits issue to a whole new level, recently filing a bill that would allow some California workers a slimmed down workweek—32 hours a week to be exact, down from the traditional 40 hours.

And companies would be required to compensate employees at the same rate of pay as their current 40-hour workweek – and pay overtime to employees who work over 32 hours a week.

In other words, the four-day workweek effectively amounts to a 20 percent wage hike for employees, based on our simplistic back-of-the-envelope calculation. And that doesn’t include potential overtime pay. Needless to say, business groups and other opponents in California are blasting the entire four-day-workweek idea as an overly expensive mandate that will only lead to employers hiring fewer employees.

The blatantly disingenuous part of the bill is that it would only apply to firms with 500 or more employees. As now written, the legislation would exempt small businesses from the law, in an apparent attempt to win more support for passing the bill.

But who really thinks small-businesses will be exempt for long if the bill is passed? One can easily see employees at small businesses agitating to have their own 32-hour workweeks.

If history is any guide, the chances of this bill passing are slim. As the New York Times has pointed out, the 32-hour workweek proposal has been kicked around for decades in the U.S. and has gone nowhere, even though it may be popular in countries such as France. Still, these are unique times and California has among the most progressive employment laws. A congressman from California, Mark Takano, has also introduced a federal bill shortening the standard workweek by eight hours.

As one advocate for the 32-hour workweek told Fortune, “A bill such as this puts the idea of reduced work time on the legislative agenda in a way that wasn’t previously the case.”

It also highlights for franchisees another potentially groundbreaking labor concern, one that is worth closely monitoring.

Speaking of uncertain economic times: By now, we’ve all heard (and felt) how inflation is rising at rates not seen in decades – and prompting QSR operators to hike menu prices. A recent study from the Bureau of Labor Statistics shows the so-called “food away from home” index rose to 6.9 percent year-over-year in March, for the largest annual increase in 41 years.

Full-service restaurant menu prices increased 8 percent between March 2021 and March 2022, while prices for limited-service meals and snacks were up 7.2 percent, according to BLS data.

The National Restaurant Association does point out some encouraging news, if it can be described that way: Menu prices are not climbing as fast as inflation in general (8.5 percent) and grocery stores (10 percent). But that’s small solace for customers and restaurant owners alike.

And from the “it’s worth keeping your eye on this one” category, coffee commodity prices are spiking because of fertilizer prices. This Bloomberg News headline pretty much says it all: “Coffee Farmers Face ‘Mega Emergency’ as Fertilizer Costs Soar.”

Fertilizer prices are soaring due mostly to disruptions caused by the Russian invasion of Ukraine. Russia – and neighboring Belarus – supplies most of the world’s crop nutrients, not to mention wheat, corn and barley, which are grown in Russia and Ukraine. Dunkin’s supply chain, the National DCP, sources coffee on a long horizon, and the system likely won’t feel the pressure from fertilizer prices in the near term, but the risk is out there, nonetheless.

Now two years after the COVID-19 outbreak, people are finally feeling like the pandemic has receded. Even Dr. Anthony Fauci, chief medical officer to President Biden, has announced the country is “out of the pandemic phase” and it is time for individual Americans, not government agencies, to assess their own COVID-19 risks.

For quick-service operators, this has meant an end to mask mandates (mostly), vaccine passes (mostly), occupancy limits and other public-health measures that were designed originally to combat the novel coronavirus and its variants.

But even as the masks have come down, battles over public-policy and public-health continue to erupt. Philadelphia’s back-and-forth policy over mask mandates in April created confusion and consternation for businesses and people in the City of Brotherly Love. The Associated Press called it “a sense of whiplash” when the city reinstated its indoor mask mandate, a little more than a month after lifting it. City officials cited an increase in local coronavirus cases, but critics noted the action came when virtually every major city had removed similar indoor mask rules.

It is also worth noting that Philadelphia is among a handful of places that is extending benefits to workers impacted by the pandemic. The city’s new Public Health Emergency Leave law guarantees up to 40 hours of paid, COVID-19 sick leave for eligible workers in businesses with at least 25 employees.

If there is one certainty, it is that business owners have to remain flexible in the face of changing economic and political realities. In many ways, the pandemic’s grip over society has loosened, but its presence still hangs in the air and continues to fog things up. One reason Dunkin’ has fared well in a challenging time is the laser focus of its operators. Great coffee and great service will always tip the scales toward the franchisees. Keeping an eye on the storm clouds outside is a good idea as well.