There’s trouble brewing out there for Dunkin’ and other quick service franchise owners as we head deeper into 2015.

Labor unions are leading the pack of politicians, activists and regulators taking aim at your businesses. Beyond the expensive new rules and mandates that raise your costs of doing business, unions are aggressively looking for opportunities to organize shops like yours.

The landmark NLRB “joint employer” ruling has now opened the door for a possible labor push within the McDonald’s system and experts warn other quick service restaurant chains will be next. What’s more, a coalition of national labor organizations is backing the “Fight for $15” campaign to push for ever bigger minimum wage hikes across the country. Pressure on the bottom line will also be felt from a growing number of proposals forcing franchise owners to give their workers two-week’s notice before a shift change.

One bright spot comes out of California. Top legislators are backing a bill that would protect quick service and other franchise owners from having their businesses arbitrarily confiscated by the big chains.

New rules give edge to unions

The Service Employees International Union (SEIU) and other labor groups have targeted McDonald’s in a long running bid to organize workers at the giant restaurant chain.

The unions hit pay dirt last July, when the general counsel of the National Labor Relations Board issued an opinion that has the potential to open the door to unionization of McDonald’s workers.

The labor board’s lawyer argued that McDonald’s should be considered a “joint employer” with its franchise owners. McDonald’s argues that 90 percent of its restaurants are run by independent franchise owners, who decide what their workers get paid and their workplace conditions.

But the NLRB’s lawyer contends it is McDonald’s corporate, not franchise owners, who ultimately call the shots and needs to step up to the plate to negotiate pay and working conditions.

That, in turn, gives a crucial boost to union activists with ambitions of recruiting workers across the entire McDonald’s fast foot empire, instead of having to target one restaurant at a time.

“This is an existential threat to the franchise business model,” the IFA’s Haller says. “The labor unions don’t like the franchise model – it’s retail unionization rather than wholesale.”

Still, while there’s no suggestion the NLRB is backing down, it’s not quite a done deal yet.

An NLRB administrative judge is now overseeing a series of public hearings as he considers the general counsel’s argument, as well as appeals by McDonald’s and other business groups.

So why care? Well some fear that as McDonald’s goes, so goes the rest of the franchise world. Critics say the ruling undermines the whole franchise system, effectively stripping away the independence of individual franchise owners.

And, if successful, unions are not likely to stop at McDonald’s, but will instead expand their campaign to Dunkin’ and other brands.

Concerned about the aggressive union campaigns, business groups and franchise owners are pushing back, working with Congress to put pressure on the NLRB to reconsider finalizing the joint-employer ruling.

If that weren’t enough, franchise owners face another threat emanating from the NLRB – so called “ambush rules” aimed at speeding union elections.

The new rules, which took effect in mid-April, eliminate a traditional, 25-day waiting period between the time when the labor board orders a union election and when the vote is actually held. That gives franchise owners and other employers less time to make their case, with further restrictions imposed on what business owners can say as well. A bill passed by Congress that would have nixed the new rules was recently vetoed by President Obama.

“The Obama Administration is taking every step possible to tip the scales in the unions’ favor,” says Kevin Glass, director of policy and outreach at the Franklin Center.

Even as unions focus their recruiting efforts on McDonald’s workers, the labor movement is targeting the entire quick service field with an increasingly relentless drive to boost the minimum wage in cities and states across the country.

In fact, the SEIU, which is the nation’s fastest-growing labor union and has been targeting McDonald’s in the joint-employer case, is squarely behind the Fight for $15, an effort to raise federal minimum wage. Symbolically, the SEIU has reportedly pumped tens of millions of dollars into the effort.

“We believe the Fight for $15 campaign is more about growing union membership and less about raising the minimum wage for low-wage workers,” Haller says.

Maybe, but a growing number of cities and states are responding by boosting the minimum wage. The proposals are popping up around the country, from Berkeley – which is looking to boost the minimum past $16 an hour – to Bangor, Maine where a proposal would gradually raise the minimum to $9.75 by 2018. It comes on the heels of one of the biggest wage hikes in U.S. history, with the minimum wage having gone up Jan. 1 in 20 different states, including Oregon, Washington, New York, Colorado, Ohio and Florida.

The SEIU was also behind the recent wave of complaints about workplace hazards fast food workers in 19 cities filed with the Occupational Health and Safety Administration. The Associated Press reports the union promoted the campaign in order to pressure McDonald’s to support unionization and a $15 minimum wage. 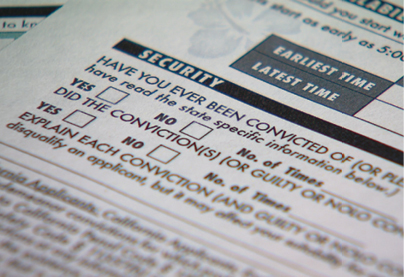 Franchises and other business owners are also finding their authority challenged in other key areas.

Union and social activists have kicked off a campaign to require companies to give up to two-week’s notice when changing work schedules, and to pay for on-call work as well.

Other proposals in San Francisco, Vermont and New York City would give employees the right to request flexible shifts.

At the same time, employers have fewer rights to learn all they can about who they’re hiring to serve their customers thanks to the “ban the box” campaign, which calls for restricting what franchise owners can ask on job applications—specifically, whether the job candidate has a criminal record.

In fact, “ban the box” is now in effect in Virginia where Gov. Terrence McAuliffe recently ordered state agencies to ban the box on applications for state jobs. And, dozens of other cities and states have implemented ban the box rules regarding public employees. Some jurisdictions now want to expand ban the box to private employers.

Dunkin and other franchise owners have spent years scrambling to meet a series of mandates from the Affordable Care Act (ACA).

Franchise owners with 100 employees are now on the hook for covering at least 70 percent of their employees. Next year, it rises to 95 percent. The threshold then drops to 50 employees in 2017 – that is if the whole law is not scuttled before then by the latest legal challenge.

The Supreme Court has agreed to hear a case – King v. Burwell – that, if successful, could effectively scrap the ACA in 32 states.

If successful, the challenge to the law would bar subsidies being given to states that have yet to set up their own health care exchanges, a wide-ranging group that includes Illinois and Arkansas.

If nothing else, the latest ACA challenge simply adds to the already deep confusion about the law and its various requirements on the part of business owners.

“That is one of the challenges – the law seems to be constantly changing and changing at the last minute, which creates hurdles for business owners,” Haller says.(Read more about your legal requirements under the ACA on page 32)

Franchise owners in California were crestfallen when Gov. Jerry Brown vetoed the fair franchising bill last fall. The proposal would have instituted important protections for franchisees so their franchisors could not effectively confiscate their businesses without any compensation.

The bill is back now, but with some wording changes aimed at easing concerns expressed by the governor. It’s backers include the Speaker of the California State Assembly.

“We are very hopeful,” says John A. Gordon, principal of Pacific Management Consulting Group and DDIFO’s restaurant analyst, who has been involved in the fair franchising effort.

“The key to the bill is a very commonsensical issue: If franchise owners are leaving the business, they should have the opportunity to get fair market value for their businesses,” Gordon says.

Keeping an eye out for you

Quick service franchise owners are under siege these days, targeted by politicians and activists pushing a crazy quilt of various causes.

And, if anything, the challenges are only intensifying. The Fight for $15 is just getting ramped up, as are proposals that would meddle with the power of business owners to schedule shifts.

The next few months will also see the NLRB most likely finalize its joint-employer rule, with all its varied and serious implications for the future of franchising.

Here at DDIFO, we are monitoring all the latest developments that could impact your bottom line so you can do what you do best, run successful Dunkin’ Donuts franchises.