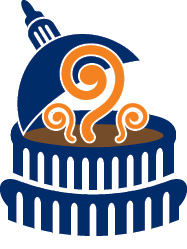 The ins and outs of keeping your Dunkin’ Donuts afloat are enough to fill your days and maybe even your nights, but the government likes to add to your challenges. With laws and regulations involving paid sick leave, higher payroll taxes and added meals taxes, Uncle Sam is putting his two cents into your business.

“We’re living in a society where the government wants to protect individual and worker rights. Of course that’s good to some degree, but many times the good intentions don’t translate well in reality and can actually cause harm to businesses,” said Robert Winsor, Professor of Marketing at Loyola Marymount University in Los Angeles. “Staying in tune with organizations like DDIFO can help you keep informed about issues that might affect your franchise.”

Informing you about important issues is exactly what we’re here for. Read on to get in the know.

Everyone gets sick now and then, and no one wants an ill employee around, for the employee’s sake, as well as the health of coworkers and customers. But paying employees when they are out of work due to illness is a costly expense to employers. An expense some cities across the country believe is worth it.

Cities such as San Francisco, Seattle and Portland, Ore., as well as the entire state of Connecticut, have mandated that employers provide paid sick leave. New York City is poised to follow suit since the City Council agreed to enact legislation requiring businesses with 20 or more employees to offer five paid sick days a year. Similar proposals are under consideration in Vermont, New Jersey and Massachusetts, which is reconsidering a sick-pay bill that was first filed in 2005, but shot down repeatedly due to strong opposition from businesses. The bill is now before the Joint Committee on Labor and Workforce Development and has its biggest backing ever with 90 House and Senate sponsors.

“Just like minimum wage laws and healthcare laws, sick pay laws make it harder for employers to make part-time jobs accessible to people. Employers can hire a student or people who have flexible home schedules to work on a part-time basis, but then all these laws make it
more sensible for the employer to hire full-time people, leaving those who can’t work a full day stuck without work,” said Winsor. “I’m not defending low-wage retailing, but there’s a need for jobs that are flexible where people don’t have to work a full day.”

Some states around the country agree with Winsor. In Florida, a bill that would forbid local governments from requiring businesses to offer paid or unpaid family and medical leave cleared a Senate panel. The goal is to prevent a patchwork of laws across the state.

In Michigan, a Senate committee has approved a bill to ban local governments from requiring employers to provide paid or unpaid leave not required by state or federal law. A similar bill was earlier approved by a House committee, and each will now be considered by the full Senate and House.

In 2009, the Massachusetts Legislature allowed communities to approve a local meals tax as an addition to the 6.25 percent the state already tacks on restaurant bills. Since then, 163 communities around the state have added a .75 percent tax to meals sold in local restaurants. The town of Weymouth might be the 164th. After resisting the tax for several years, Weymouth Mayor Sue Kay has asked the Town Council to approve a local meals tax in hopes to collect an estimated $525,000 annually to be used for maintaining and improving the town’s parks.

“People are sick of paying taxes in general and don’t always trust government putting tax revenue where it says it will, so I can’t imagine that they’d be too thrilled to hear more taxes are coming,” said Lynne McLaughlin, Weymouth franchise owner.

When asked if the tax would affect her store, McLaughlin said she isn’t sure. “If people can drive to the next town’s Dunkin’ Donuts to avoid the tax, some might. On the other hand, if you’re adding .75 percent on a $4 dollar purchase, customers might not even notice it as much as they would at a sit down restaurant where the bill is higher. After all, many times, my customers are on the go and don’t even want a receipt,” she adds. 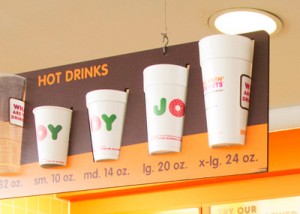 In response to Manhattan Supreme Court Judge Milton Tingling’s decision that a ban on sugar-sweetened beverages larger than 16 ounces in size was “unlawful, arbitrary and capricious,” the city of New York will appeal his decision in appellate court this month.

To help fight obesity in New York City, the Department of Health & Mental Hygiene approved the ban in 2012. It caused quite a stir because it would have prohibited restaurants, delis, stadiums and arenas, concession stands and food carts from selling sugar-sweetened beverages in containers 16 ounces or greater.

“I understand the effort to make people healthier, but it’s pretty hard to outsmart consumers with these laws. People make choices and find ways around them like buying two smaller cups that equal more than 16 ounces. Plus, if this law only focuses on restaurants, consumers will find their sugary beverage at grocery stores or other places,” said Winsor. “Really all this would do is make restaurants suffer.”

When the 2 percent payroll tax holiday expired at the end of 2012, workers immediately saw less money in their paychecks. An average private-sector worker who makes $820 a week and is paid every other week experienced $32.75 less per check. This higher payroll tax may have taken its toll on restaurants, according to a poll by Nation’s Restaurant News, which surveyed 49 operators across the country that represent the quick-service, casual-dining, fine-dining and fast-casual segments regarding February sales, profit trends, performance and outlook. The survey showed that eateries experienced a 1.8 percent decline in sales during February, the worst same-store sales decline in three years.

“The bottom line is the bottom line, and any type of tax increase like this is going to affect it,” said Shailesh Shah, franchise owner in Orland Park, Ill. “In this particular case, it’s my employees who are really feeling the impact because it means less money for them. I have to remind them that there’s nothing I can do to change it, unfortunately.”

We’re working hard to better focus DDIFO and our members on political and governmental advocacy with these types of issues.

What’s it to you?

Whether these issues affect you now or could possibly in the future, DDIFO is always looking out for legislation that could impact your business.

“We’re working hard to better focus DDIFO and our members on political and governmental advocacy with these types of issues. We have a bona fide army of small business owners – franchisees – out there. To the extent we can alert them and mobilize them to respond to government intrusion and encroachment into their businesses, we can make a significant impact,” said DDIFO Executive Director Ed Shanahan. “Corporate America can certainly impact government initiatives, but companies don’t vote. Small business owners and their employees are the constituents of our elected officials and they’re the ones who cast the votes that make a difference. But that only happens when they’re aware, involved and engaged. That’s where our efforts will pay off.”

Although DDIFO works with legislators to make changes before laws are final, you can help as well, by keeping informed about changes on the rise. Shanahan suggests staying in contact with state representatives, community leaders, lobbyists and others who can help make an impact. And, if you hear of a local issue that threatens your business, share the information with DDIFO. After all, it’s always better to have another set of eyes watching your back.